This topic is about A Five Year Sentence
42 views
Booker Prize for Fiction > 1978 Shortlist: A Five-Year Sentence 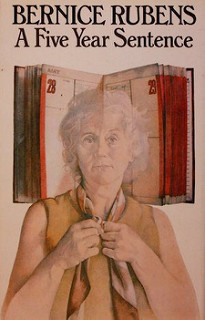 Miss Hawkins looked at her watch. It was 2.30. If everything went to plan, she would be dead by six o’clock. But instead, having been sentenced to live, she embarked on a mission to taste life’s secret pleasures.

I'll start this tomorrow hopefully - love Rubens's style after a quick read of the opening page.

This is the first book I've read by Bernice Rubens. What an odd book. It feels much older than 1978, perhaps because it brings to mind Judith Hearne which was published in 1955.

Got it from the library yesterday! Starting it tomorrow :-)

I was deeply disturbed by this book (though if it's possible, I mean that in a good way).

Christopher Hitchens was prone to saying, with respect to freedom, that the manacles of the mind are sometimes the hardest to break. Obviously he was talking about religion, but this book shows some of the other manacles in a profoundly affecting way.

Miss Hawkins is so wed to servitude, so much a prisoner in her very essence, that there was just no possibility that she would ever be a free human being. I think what is most disturbing about the book is the sense that her lot, while certainly extreme and exaggerated, is not that far off from everybody's lot. I can certainly see how her mental habits of servitude are always potentially there, and how easy it is to fall into them, if perhaps not to the extent that Miss Hawkins does.

Brian, too, is disturbing: the way abuse leads him not to submission but to cruelty, his self-justifications, the mental calculus that he uses to excuse his ongoing actions. Even his change of first name I think is a way in which he doesn't quite like himself. I can see how these mechanisms, too, are available to all of us at any time. It's in a way much too easy to understand where Brian is coming from and why he acts as he does, even as we feel terrible for poor Miss Hawkins.

So far, I think this is my favorite of the three I've read. Maybe I will even head over to the other thread and indulge in my first ever Booker shortlist ranking.

Nicole wrote: "I was deeply disturbed by this book (though if it's possible, I mean that in a good way).

Nicole, and if you liked A Five Year Sentence, then you might also appreciate Molly Keane's Good Behaviour (1981 shortlist) and Beryl Bainbridge's An Awfully Big Adventure (1990 shortlist).

I completely agree with Nicole's thoughts. This was deeply disturbing. This was my first book off the list and my first by this author. I thought the writing was excellent. It was a bit lacking in complexity but I won't be surprised if it ends up a personal favorite.

An odd little book, shortlisted for the 1978 Booker Award, it seems more like a novel from the '50's. Although humorous, it is ultimately somewhat sad, as it depicts the dwindling fortunes (romantic and financial) of a spinsterish orphan, who after deciding to kill herself upon retirement from her dreary job in a candy factory, decides she must live in order to fill up the five year diary presented as a present upon such occasion. She meets a man with whom she begins a relationship whereby she pays him for each little romantic 'favor' - and this is where I begin to quibble. The arrangement is initially presented as strictly financial, but morphs halfway through the book inexplicably, whereby she then asserts that the money paid her gigolo is being set aside in investments for her. This makes little or no sense, since Brian would than have no incentive for carrying out his 'obligations'. My other objection is that the chapters detailing Brian's life (with his other customers, as well as his crotchety incontinent mother) take over the book - for the better - and one wonders why HE wasn't the focal point all along, rather than the dispiriting Miss Hawkins.

Amanda wrote: "I won't be surprised if it ends up a personal favorite."

I know what your mean: I feel like The Sea, The Sea was in some way I can't articulate a better book, but somehow I just like this one the best.

Mod
What a strange little book. Some lovely writing, but having read about two thirds of it so far, I agree with the comments about it being a little disturbing. This was a very strong shortlist, and I am going to find it hard not to place something very good in fifth place.

I finished it yesterday, too bad Brian doesn't get his just desserts as well!
I was wondering about the end - how would they ever arrest her for murder? the gardener didn't even see her, and the annexe is secluded.
But I guess that isn't the point, with no matron or diary or Brian to direct her - Miss Hawkins is at a loss.

I think social or religious conventions (especially the strict, unforgiving ones) can often influence people to make bad decisions that ultimately make them unhappy, and this novel cleary shows what an unhealthy symbiosis can occur.

Forgot to come back and add my thoughts: absolutely savage novel, this. Utterly despairing and misanthropic and hopeless. I loved it.

'Here's what happens to institutionalised people once the institution is taken away - they capitulate then do something terrible, and yearn for their old shackles'. That seems at first glance to be what Rubens is suggesting, and seen from that angle it seems to be a cruel trick of a book. But the characterisation is so expert that it becomes instead repugnantly fascinating satire. It's just so much fun, so hysterically overblown and ruthless, and is probably best seen as a skewed and brilliant exercise in feminist comedy (the way the consumation is handled and equated to the hanging/menstruation). Great last line as well.

After reading The Elected Member (1970 Booker winner) and A Five Year Sentence, I started wondering about Bernice Rubens. A cursory investigation of our local library system catalogue yielded a chapter by David Brauner (“Bellow at your elbow, Roth breathing down your neck: gender and ethnicity in novels by Bernice Rubens and Linda Grant”) in Claire M. Tylee’s (ed.) “’In the Open’: Jewish Writers and British Culture”, and an interview in Rosemary Hartill’s “Writers Reviealed: Eight Contemporary Novelists Talk About Faith, Religion, and God.” The Tylee volume also included a chapter on Anita Brookner. I’m unaccustomed to academic literary criticism, and I needed to guard against leaving the Tylee volume less interested in Rubens, Grant, and Brookner (all of whose novels I enjoy and admire) than when I started.

The Hartill interview I found more interesting (the volume also includes interviews with both Anthony Burgess, with Earthly Powers discussed, and Iris Murdoch). Rubens seemed to regard her literary career in workmanlike terms, as a good way to support herself and her daughters. She disliked recognition in person, and apparently when recognized in public she sometimes tried to pass herself off as her good friend Beryl Bainbridge. See the wonderful 2004 interview with Beryl Bainbridge, with Rubens accompanying her, in which (https://newhumanist.org.uk/articles/6...) in which the interviewer describes Bainbridge and Rubens looking “like two naughty schoolgirls on a park bench” and Bainbridge dismisses Howard Jacobson’s comments “about there being something transcendental about writing. ‘Oh yes. He did. But then he's a fellah. And it matters to fellahs.’"

I'd appreciate additional references about Rubens that any of you might have.

"In his pin - striped suit, and pointed shoes, he looked like a travelling salesman with a suitcase full of cunning"p176

Thus Brian Watts is described in A Five Year Sentence.

It's rare to find a book where every main character is deeply flawed, but this is exactly what Bernice Rubens delivers. For the reader there's a ghastly inevitability that things won't turn out well.

In 2016, the Internet, and dubious internet sites with bogus alter egos are lying in wait for the unwary. In the 1970's the world was seemingly just as duplicitous.

A Five Year Sentence is very well written, and it deals expertly with orphanages, old age and avarice.

I saw this advertised to me today and shuddered.

Mod
Of course what spared it from being unrelentingly depressing was the opening - given that the heroine is on the verge of suicide to start with you could argue that she is no worse off at the end...