Psychic sentient space-panthers! Oooh, my! Last year we read the first book in this series as our group read, and now through the luck of the Random.org randomizer, our long-term SOF member Leonie Rogers has Book 2 of the series up for us to read! 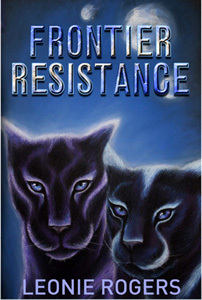 For Shanna, joining the Scout Corps had been a dream come true. The Scouts were charged with expanding their knowledge of Frontier, a hostile planet their ancestors had crash-landed on 300 years before. As the youngest in her class, Shanna struggled to find acceptance and respect amongst her older peers - a task made more difficult by the fact that she has not just one, but two of the colonists' huge feline companions, their starcats.

On a routine patrol, she and the other cadets found themselves on the frontline of a war they knew nothing about against the hostile Garsal. Now Shanna and her friends must master their new gifts that will enable them to seek out the alien invaders before they enslave her world.

But it’s hard. Shanna and her friends have gifts that might save the world, and perhaps one day the galaxy - if they can master them. But the training is difficult, and they still don’t know where the Garsal are.

On the plateau, the Council has allied with the Starlyne race, but Tamazine, the Senior Councillor’s distrust of their new allies creates a final weakness. Below, the Garsal Overlord needs a new pool of human slaves to expand his empire, but first, he must locate and subdue Frontier’s human settlements.

Time is running out, for both invader and settler, and the outcome hangs in the balance.

ARE YOU READING FRONTIER RESISTANCE? Shout it out in the discussion thread below, find some Book Buddies, and tell us what you think as you read through the book. Just remember to be kind please and use the spoiler .html so you don't ruin the fun for somebody who isn't as far along.

Just a note on this story - if you haven't read the first one, you may find yourself floundering around a bit, as it's the middle book of the trilogy. Having said that, let me know if you'd like a quick synopsis of book 1!

Mod
I have read and enjoyed all three of the books in this series, but too recently to reread this month. I'm looking forward to discussions here though.

Got it! Time to steal it back from the kiddo so I can read it :-)

This series was in my priority list of wants. I have the firxt two and whike too late for the October BOTM, I am looking forward to reading them.

Lizzie wrote: "This series was in my priority list of wants. I have the firxt two and whike too late for the October BOTM, I am looking forward to reading them."

That's great to hear! Hope you enjoy them, Lizzie!

Leonie wrote: "Lizzie wrote: "This series was in my priority list of wants. I have the firxt two and whike too late for the October BOTM, I am looking forward to reading them."

I have read all 3. Loved them. The bilogical diversity and how you worked it into the story was exceptional. The outcome in book 3 was an interrsting turn of events. Knowing the matriach had something going on but not exactly what, I really wondered how you were going to bring it to a conclusion when I saw how few chapters I had left to read.

I wish you would write a companion book of the colony's early years.

Lizzie wrote: "Leonie wrote: "Lizzie wrote: "This series was in my priority list of wants. I have the firxt two and whike too late for the October BOTM, I am looking forward to reading them."

I'm actually toying with that idea, Lizzie. And I also have a few ideas for What Happens Next. I'm in the middle of a fantasy trilogy at the moment, but I may well re-visit Frontier again when that's done.

Mod
I just started rereading this one.

Mod
I didn’t like the second book as much as I did the first. I’m currently rereading the third book and will probably enjoy it more.

I found the story line dragging along at times! But it was worth slogging thru it to reach the ending which was action packed!

Mod
The third book was excellent. I tried valiantly to put it down and go to sleep multiple times without any luck, despite the fact that I had read it before. Finished it about 2am.