Mod
T.C. Rypel's Gonji series: The initial Zebra books of the 1980’s essential split one long novel into a trilogy (I suspect the split was arbitrary). T.C. Rypel’s 1980 series has been released in a more complete forms (more books, eBooks, audiobooks). The newer releases from Borgo Press seem to have maintained this split.
Books 1-3 are the original trilogy:
1) Gonji: Red Blade from the East: The Deathwind Trilogy, Book One
2) Gonji: The Soul Within the Steel
3) Gonji: Deathwind of Vedun: The Deathwind Triology, Book Three
4) Gonji: Fortress of Lost Worlds
5) Gonji: A Hungering of Wolves

I have Red Blade from the East, as well as an original copy of book four in the series.

Ted Rypel is very accessible and has been working on Gonji still, with an impending new entry-point work called Dark Venture (novella I think).

[Porting over my comments from the main link to this discussion...]

I frankly expected group members to pass over the extant books for now and opt to re-consider Gonji when the new book of shorter material---DARK VENTURES---appears (whenever Wildside Press decided to issue it; I'm awaiting proofs). But the Deathwind Trilogy is the logical place to begin, with the re-issued novels, since they're chronological, thus far.

DARK VENTURES contains a novella ("Reflections in Ice") and the short novel "Dark Venture," which precedes the novels on the timeline. As the creation/publishing-history essay in that book ("The GONJI Odyssey") will explain, the epic novel DEATHWIND (my first novel, actually) represents my choice to present a benchmark moment in Gonji's quest (not unlike what Lucas did with STAR WARS). Who knew if I'd ever have the chance to publish more of Gonji's saga? So I wrote the pivotal Battle of Vedun encounter, which would introduce important characters and catalyze everything else to follow.

If you read the Deathwind Trilogy in Kindle, you don't get the helpful "Map of Vedun" that's present in the paper editions. You can copy it out of the Pictures at the "Gonji Fictional Character" FB page. Or PM me at my "Ted Rypel" FB page.

So...there are stories to tell that fall before and after the trilogy. DARK VENTURES contains both, not the least of which is the book-ending teaser, the 5-6,000-word excerpt of the next book in the series: the apocalyptic origin novel BORN OF FLAME AND STEEL.

And how can an "origin" be "apocalyptic"...? In Gonji's system of concentric worlds, many strange things are possible...

Thanks again for the consideration! I'm always available for questions about the books. But that aforementioned essay in DARK VENTURES will be really useful as a series b.g.

Mod
Here is map of Vedun provided by Ted!
It appears in the print copies but not the Kindle ones. 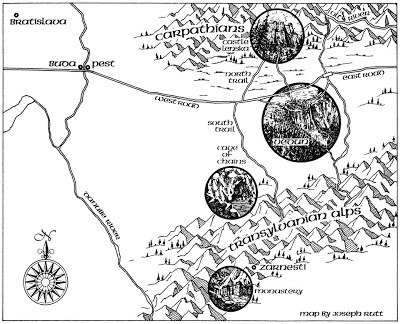 Thanks, Seth! I posted it on the FB pages where your link appears but couldn't figure how to pop it on here.

That map was drawn by Joe Rutt for the original Zebra editions of the trilogy books back in the 1980s. It's extremely helpful for keeping track of events, battle locations, etc. Wildside Press says they have problems reproducing interior artwork in their Kindles.

Mod
T.C. wrote: "Thanks, Seth! I posted it on the FB pages where your link appears but couldn't figure how to pop it on here. That map was drawn by Joe Rutt for the original Zebra editions of the trilogy books bac..."

I've published images in Kindles before...and it is very difficult to get them to show in "responsive" screens of varying resolution and dimensions. Nice to show off the map here!

Also, DARK VENTURES sounds incredible. Even if it comes out after the group read, we can use this forum to discuss (even after Oct); we may make a new folder too. Any way, I know several of us are interested in DV.

Yeah, I had no idea what Wildside was talking about, having no hand in the mysterious processes of these modern publishing formats. In fact I didn't even know the map was missing from the Kindles until a reader expressed some difficulties in getting oriented in the trilogy territory.

By that time I'd begun planning some interior illos for DARK VENTURES---had great artists lined up ready to contribute out of Gonji-love---and then Wildside lowered the boom on my plan.

I wanted DV to be a real blockbuster, presentation-wise, since its reception, with the shorter pieces and all, might help get younger s&s readers past the "novel-series" hurdle: Once DV hooks ya, there's no goin' back! At least, that was what my hubris was planning...

Mod
Not only is Dark Ventures bigger than I thought it was, but a Gonji origin novel is coming too!
Ted Rypel posted a nice update on the forthcoming DARK VENTURES as part of a discussion in the "Egypt" theme. I copy/repost part of it here:

"I'll go on to mention two other things that may be of interest to you, if you find Gonji compelling. First, I just finished proofing Wildside's printed text for the NEW Gonji book, DARK VENTURES, which should be released in a matter of weeks now. It comprises two new novellas, my essay on the series' creation/production history, and a generous excerpt from the coming Gonji origin novel, BORN OF FLAME AND STEEL. You can follow news of both books at the Gonji Fictional Character FB page, or my own (as "Ted Rypel").

Plus, veteran poster, cover and storyboard artist Woody Welch---a genuine monster specialist---just floored me with a beautiful interpretation of the monstrous Cave Worm that Gonji and his militia deal with in the catacomb battle at the end of the second Deathwind book. It's a doozy! I'll be posting it on both of those FB pages. And Woody promises more soon."

Thank you again, Seth, for your tireless, if not thankless, efforts in moderating these forums. And here's my particular gratitude for your enthusiastic support for Gonji's reintroduction in the fantasy genre that largely missed it in the 1980s, due to Zebra Books' promoting it as mainstream historical fiction.

Ugh! I see above that my battered and and besieged memories have ill served me once again: Not only did I just rehash the crux of the DARK VENTURES info, largely posted earlier in the thread, but I also sent you ANOTHER copy of the important "Map of Vedun," which Wildside left out of their Kindle editions of the Deathwind Trilogy because of systemic repro problems. Ah, well...

Anyway, I'm hoping a few readers who joined with group effort are enticed to look into DV when it comes out within the next few weeks. I'd love to hear their feedback. Over the years, the Gonji series, like any other that's been reviewed over time, has taken some hits for being either: a) too violent and action-heavy; and, b) too measured in its pacing and character-heavy!

I've heard a few negative reviewers---always a revealing dynamic---say that Gonji has "too high a body count," while a few others lament that too much time is spent getting to know characters and intensifying relationships: "I don't care who's in love with whom; or who's worried about his loved ones being imperiled---just show me the kills!" It's always fascinating to hear a full spectrum of reader responses.

The point here is that, with DARK VENTURES' two novellas, I'm expecting one story to evoke ONE of those kinds of extremist responses, and one the OTHER! And as for BORN OF FLAME AND STEEL... BOTH those extreme reactions may meet in the middle and simply implode out of bewilderment!

I just hope they both enjoy these tales before spontaneously combusting!

Mod
Just wrapped up the original Gonji trilogy. The first half (of the last installment) was okay, but the last half was exhilarating.

I am very excited about the subsequent installments including the about-to-be-released Dark Ventures and a Gonji origin novel.

Domo arigato, Seth! Delighted that it left you looking forward to more.

DARK VENTURES is a perfect entry point for new readers---shorter tales and a series publishing history. The origin novel, BORN OF FLAME AND STEEL, is as ambitious as anything in the series. It's such a mind-boggling challenge to find that there's no way of avoiding the (fantasy-)historical fact that your series hero was the result of a multi-verse apocalyptic event...that also spawned what we've come to know as the Japanese kaiju.

It's...hard to reduce to terse summary. Better to experience it.


Rypel's Gonji Sabatake is back on stage with new tales!  The original 1980's Gonji Trilogy is great fun, a mashup of Sword & Sorcery and Godzilla-like monster movies. They were released recently, but there has been no published new Gonji for decades... until now.  And this one promises even more!


(paraphrased from the book blurb):


Hear the rallying cry for fans of the popular 1980s heroic-fantasy series. Here are two new tales of GONJI SABATAKE, the itinerant samurai-Viking warrior.. and an excerpt of another forthcoming novel! An ideal entry point for new readers.

1) The novelette "Reflections in Ice" -- picking up a mature Gonji, already well into his ca. 1600 A.D. European adventures, ensnared in a desperate crossfire between monstrous oppressors: the undead assassins of the Dark Company; and mysterious horrors residing in remote caves of the snowbound Pyrenees…

2) The novella "Dark Venture" -- the most intense, action-packed and classic-pulp-worthy Gonji tale in the canon.

The first-ever story of "young Gonji," in dishonored exile from his native land. Now facing deadly peril during a bizarre and ghastly sea voyage; caught in the clutches of a hell where corrupted spells of evil magic go to die…

3) A generous preview of the coming new forthcoming Gonji novel "Born of Flame and Steel": the audacious origin tale of Gonji’s world.


Gonji Series :
The initial Zebra books of the 1980’s essential split one long novel into a trilogy (I suspect the split was arbitrary).  T.C. Rypel ’s 1980 series has been released in a more complete forms (more books, eBooks, audiobooks). The newer releases from Borgo Press seem to have maintained this split.

1)  Gonji: Red Blade from the East: The Deathwind Trilogy, Book One

2)  Gonji: The Soul Within the Steel

5)  Gonji: A Hungering of Wolves

Many thanks, Seth, for your ongoing support of the re-issues and continuation of my GONJI heroic-fantasy series. God knows how hard it is to promote a series revival from the "olden days" in the midst of a cosmic swarm of new fantasy storytelling content, not to mention gaming, where much of readership seems to have migrated.

But hell...maybe there'll be a Gonji RPG in the offing---the subject comes up every so often, along with the possibility of graphic novels, and poster art, and movie adaptations...

Hoping new readers will take a look and see whether such attention is warranted.

I'm always around, on the fringe of this dimension, willing to answer questions and expand on any discussions.

Thank you, Jack, for the fine review of the first book in my Gonji "Deathwind Trilogy." Much obliged to you for taking the time to weigh in so positively.

I hope the trilogy---and the rest of series---measures up for you.

And don't forget that the most recent book, the sixth---DARK VENTURES---can be interposed at any time without spoilers and should in fact prove beneficial to your enjoyment of the series, with its shorter tales and definitive series creation and publication history essay. That piece functions rather like REH's Hyborean Age essay in the Conan universe.