August 2016: The Wonderful Wizard of Oz by L. Frank Baum 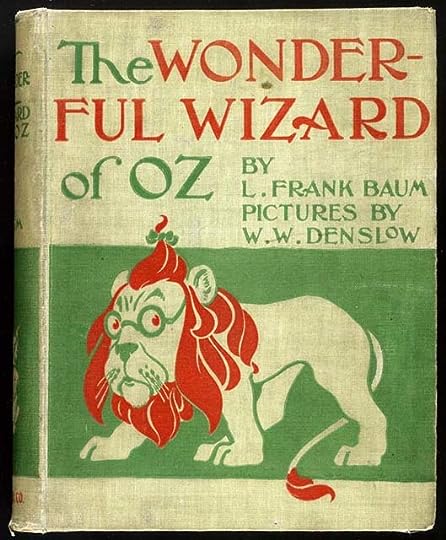 For August we will read a short and sweet fantasy by L. Frank Baum.

Dorothy thinks she's lost forever when a tornado whirls her and her dog, Toto, into a magical world. To get home, she must find the wonderful wizard in the Emerald City of Oz. On the way she meets the Scarecrow, the Tin Woodman and the Cowardly Lion. But the Wicked Witch of the West has her own plans for the new arrival - will Dorothy ever see Kansas again?

1. The Wonderful Wizard of Oz was first published in 1900 and met with both commercial and critical success. It continues to be a favorite, and the story has been translated to the stage and film numerous times. What do you think makes this tale so appealing, so timeless, and so easily adapted to other media?

3. In addition to being a writer, L. Frank Baum was an actor and playwright. Does theatricality play a role in this book? How? What role does illlusion play in the story?

4. The Wonderful Wizard of Oz is said to be the first American fairy tale, and L. Frank Baum had indeed aspired to write a fairy tale that was different from the older, mostly European ones. How is this story the same as or different from, for example, those by the Brothers Grimm? Is it particularly American? If so, in what way(s)? What makes it unique?

5. One of the things that L. Frank Baum did not like about traditional fairy tales was the didactic way in which they taught
morals and values. Does his story express any particular values or moral lessons? If so, how does he communicate them?

6. Though this story has had a timeless appeal, is there anything time-bounded or dated about it? Are there aspects of the story, characters, style, or setting that decrease the accessibility or appeal of the book for a modern audience?

8. The Scarecrow yearns for a brain, but in reality he is the most intelligent of the small group in which Dorothy travels. Is this irony present elsewhere in the story? If so, what do you suppose Baum's purpose is in using this device?

9. Baum has been praised for his ability to include psychological and philosophical insight in a fantastical children's story. In what ways is this story psychologically and/or philosophically insightful or sophisticated?

10. Analyze the character of the Wizard. Why does he behave the way he does? Is his behavior excusable or not? He tells Dorothy that he is a good man but a bad wizard. Do you agree?

11. What is the significance of the delicate people in the Dainty China Country? What is Baum saying about beauty and/or about sensitivity in this chapter?

12. In his Preface to The Wonderful Wizard of Oz, Baum says that he aimed to create a tale in which "wonderment and joy are retained and the heart-aches and nightmares are left out." Would you say he succeeded? Do you think that this type of optimism and pure entertainment are valuable? Why or why not?

14. Why do you think Baum wrote this story when he did? Was there anything going on in the world at that time that might have led him to want to write a pure fairy tale?

15. What are the power dynamics in Oz? Who has power and who lacks it? How does one gain and lose power in Oz?

16. Baum's mother-in-law was a feminist and a suffragette. Do you think the ideals of feminism influenced Baum's writing of The Wonderful Wizard of Oz? In particular, how would you view Dorothy and the witches in a feminist context?

I have not read this book in years! I might try this one audio :)

Kris - My Novelesque Life wrote: "I have not read this book in years! I might try this one audio :)"

The Anne Hathaway version is a lot of fun!

I had to read this for my college political science class.

I learned that it's supposedly (there's some disagreement) an allegory for the gold standard debate that was going on at the time.

The Yellow Brick Road = The Gold Standard
Emerald City = Greenbacks - i.e. Paper money (view spoiler)[In the book, the Emerald City is actually white. Everyone is just fooled because they're forced to wear green lenses, and people at the time said paper money not redeemable for gold was likewise fake because ultimately only has value because we agree it does. (hide spoiler)]
Land of Oz = Oz is an abbreviation for ounce, as in an ounce of gold.
The Wizard = The politicians that argued to get off the gold standard.

And on, and on and on...
My teacher ruined my childhood memories!

Melanti wrote: "I had to read this for my college political science class.

I learned that it's supposedly (there's some disagreement) an allegory for the gold standard debate that was going on at the time.

I remember the same allegory, Melanti. I even taught it a bit to my high school students.

Melanti wrote: "Kris - My Novelesque Life wrote: "I have not read this book in years! I might try this one audio :)"

The Anne Hathaway version is a lot of fun!"

Thanks, Melanti! I will try to go for that version.

I had not heard of allegory...put I never did any political science.

I loved it as a kid and still kind of do.

I'm early in my reading, but I just saw on This Day in History that today is the anniversary of the movie opening. Timely reading. http://www.history.com/this-day-in-hi...

I saw that, too, Allegra! I'm hoping to read the story soon :)

On chapter 4, noticing the differences between the movie and the book.

reply | flag
message 13: by [deleted user] (last edited Aug 25, 2016 02:28PM) (new)
Aug 25, 2016 02:27PM
1. I remember feeling like the story was so "staged" / artificial when I saw the movie as a kid. As I read the book now I feel it again. I believe Braum started with the idea mentioned in question #4, to create a modern American fairytale, then added story elements with his acting/playwright flair (maybe after studying elements of other fairytales for a formulaic approach?). Almost like he figured he would take it to the stage eventually right from the beginning too. I'm thinking he was naturally a good marketer as well as a writer and that he intended to create something with mass appeal that might make him rich. Don't know why that surprises and disappoints me...maybe because of an idea that I have that fairytale should be full of innocence?

I thought it was interesting that Baum wanted to create an entertaining fairy tale, not one like the stories of Grimm with all the graphic horrors. But, I found his story also a bit brutal. The Tin Man was pretty handy with his axe and had no compunctions about taking out a pile of wolves, crows, bees, or the Kalidahs. And, the Wicked Witch wasn't much better.

The funniest part of the book, and it's been many years since I read it, was the fight between Dorothy and the Wicked Witch. Two female characters fighting over shoes. LOL

Melanti wrote: "The Yellow Brick Road = The Gold Standard
Emerald City = Greenbacks - i.e. Paper money (view spoiler)
Land of Oz = Oz is an abbreviation for ounce, as in an ounce of gold.
The Wizard = The politicians that argued to get off the gold standard.

And on, and on and on...
My teacher ruined my childhood memories!"


"...So goodbye yellow brick road,
Where the dogs of society howl.
You can’t plant me in your penthouse,
I’m going back to my plough..."

Of course, it's not my words, Loretta, it's Elton John :)
Actually, the song is Elton John's. The lyrics were written probably by Bernie Taupin.

I know you are a fan of John Lennon. Do you like Elton John at all?

The Wonderful Wizard of Oz (other topics)