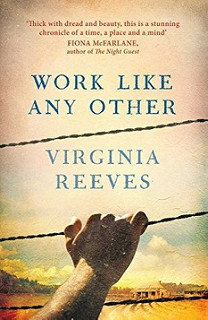 Placing itself perfectly alongside acclaimed work by Philipp Meyer, Jane Smiley and J M Coetzee, this debut novel charts the story of Roscoe T Martin in rural Alabama in the 1920s.

Roscoe has set his sights on a new type of power spreading at the start of the 20th century: electricity. It becomes his training, his life's work. But when his wife Marie inherits her father's failing farm, Roscoe has to give it up, with great cost to his pride and sense of self, his marriage and his family.

Realising that he might lose them all, he uses his skills as an electrician to siphon energy from the state, ushering in a period of bounty and happiness on a farm recently falling to ruin. Even the love of Marie and their son seems back within Roscoe's grasp.

Then everything changes. A young man is electrocuted on their land. Roscoe is arrested for manslaughter and - no longer an electrician or even a farmer - he must now carve out a place in a violent new world.

Rural Alabama in the 1920s is on the verge of electrification. Already, the pylons take the current from town to town, passing over the heads of poor farmers who think it is witchcraft. It is a power that is seen to be slightly beyond comprehension and slightly beyond control.

But, for Roscoe Martin, wedded to an unforgiving wife and her family’s failing farm, it is an opportunity to evolve. With powered machinery, the farm would not just turn a profit, it could reap huge productivity dividends. With some technical know-how, it is a sinch for Roscoe to hook up into the grid, siphoning off power that would be lost anyway through onward transmission. And Wilson, the wise black farm manager seems willing to go along with it…

However, the reader knows from the very opening words that it is not going to go well. The current will kill a man, and ultimately Roscoe and Wilson are called upon to pay the price. Roscoe receives injustice as his punishment far outweighs an offence that would now seem trivial; Wilson receives an injustice as he is deemed to be an accomplice to a project that would only ever have benefited Roscoe.

For the first two thirds of the novel, we interleave chapters narrated by a third person, and chapters narrated directly by Roscoe from prison. This works well up to a point, and of course there is an inevitable contrast drawn between Roscoe’s incarceration for having killed a man by electrocution, and the nascent use by the prison system of the electric chair. Unfortunately, the prison chapters soon run out of much to say and both sets of chapters end up telling the backstory. It is very well told, but it does feel as though the narrative, like Roscoe’s sentence, is unnecessarily prolonged, running to 20 chapters simply to match Roscoe’s sentence.

The final third of the novel abandons the chapter format and gives a first person narrative of Roscoe’s life on release. This offers plenty of opportunity to compare and contrast Roscoe and Wilson’s experiences and fortunes. It is pretty emotional in places. What it lacks, though, is any terribly cogent rationale for how things ended up as they had. This doesn’t seem to be a case of crime and punishment, or even behaviour and consequences. It just seems to be random outcomes from unjust situations with characters behaving strangely given all that we have come to know about them.

This is not a bad novel; even if parts of it can feel repetitive, it is not a long novel and it mixes the bleakness with humour and sunlight. There are some interesting ideas knocking around. But overall, it doesn’t quite work; it is not as profound as it clearly hopes to be.

A competent first novel, but little more. Alternating chapters tell a third person chronological tale of a man's hubris and his rapid downfall, bringing others with him. These alternate with first person chapters of the main character before, and largely after, his fall. The ponderous set-up of the entire thing leads the reader to expect some great catharsis, coming-to-jesus moment where the various strands of the book, stated and hinted at, come together. Nope. Just a continuance of the semi-revelatory prose. This one wins, so far, my why-was-this-longlisted award. I have it listed slightly above Hystopia simply because the later doesn't even delivery a good read, though it is significantly higher in the Great Ideas department.

Oddly, the second half of this book kept reminding me of The Unlikely Pilgrimage of Harold Fry, which, unlike this book, I quite liked, and which Trevor gave me endless grief about.

Until at least halfway through this debut novel, I was thinking it was at best a 3 star, and was wondering why it even got nominated for the Booker. The structure irritated me, alternating chapters in the third person with first person narration by the main character - this was interesting and innovative the first 8,473 times I'd encountered it, but it has become a hoary cliché of modern writing. The timing of certain events also seemed off (wait, isn't Gerald only 12 years old - what's he doing in college already?), until I realized the story wasn't being told chronologically, but moving backwards and forwards. Despite all that, and some languid sections, the book grew on me, evoking memories of the best of Faulkner in places, and by the end I realized I had really enjoyed it after all and that I had read it in less than a day

I thought this was well written and ultimately quite moving novel. It was a bit of a slow burn for me - I didn't really engage with it until the last third, when Roscoe was out of prison and then I found I was quite emotionally invested. I thought it raised some interesting themes of forgiveness and blame.

It does seem more conventional than most novels on the longlist (certainly of the ones I have read so far) and would be surprised to see it on the shortlist, but I think it was a very promising debut and I would certainly read any future novels by this author.

I decided to be completist and read this novel after it didn't make the shortlist. I am glad I did - this would definitely have made my shortlist, and I will watch for more books by this author.

I agree with all above. I thought it a strong, competent, enjoyable novel. One that wasn't flashy enough to garner the attention some of the others did. In some ways I enjoyed it the most of all the books I read. In other ways (hey, I tend toward the flashy sometimes), I enjoyed a few of the others more. Still, well done and I'm really glad it was on the longlist.