The death of a notorious London diamond merchant draws aristocratic investigator Sebastian St. Cyr and his new wife Hero into a sordid world of greed, desperation, and the occult, when the husband of Sebastian’s former lover Kat Boleyn is accused of the murder.

Regency England, September 1812: After a long night spent dealing with the tragic death of a former military comrade, a heart-sick Sebastian learns of a new calamity: Russell Yates, the dashing, one-time privateer who married Kat a year ago, has been found standing over the corpse of Daniel Eisler, a wealthy gem dealer. Yates insists he is innocent, but he will surely hang unless Sebastian can unmask the real killer.

For the sake of Kat, the woman he once loved and lost, Sebastian plunges into a treacherous circle of intrigue. Although Eisler’s clients included the Prince Regent and the Emperor Napoleon, he was a despicable man with many enemies and a number of dangerous, well-kept secrets—including a passion for arcane texts and black magic. Central to the case is a magnificent blue diamond, believed to have once formed part of the French crown jewels, which disappeared on the night of Eisler’s death. As Sebastian traces the diamond’s ownership, he uncovers links that implicate an eccentric, powerful financier named Hope and stretch back into the darkest days of the French Revolution.

When the killer grows ever more desperate and vicious, Sebastian finds his new marriage to Hero tested by the shadows of his first love, especially when he begins to suspect that Kat is keeping secrets of her own. And as matters rise to a crisis, Sebastian must face a bitter truth--that he has been less than open with the fearless woman who is now his wife.

Character List
(view spoiler)[
Sebastian St. Cyr: Viscount Devlin. Tall, leanly built man, not yet 30-years old. He has dark hair and strange yellow eyes with the unnatural ability to see clearly at great distances or at night. Lord Hendon's only surviving son, they enjoy a very complicated and acrimonious relatiohship. St. Cyr's mother abandoned him at a young age which still affects him to this day. He was forced to forgo the love of his life, Kat Boleyn due to familial secrets. He's now married to Hero who is pregnant.
Hero Jarvis St. Cyr, Lady Devlin: Viscountess Devlin. Daughter of Charles, Lord Jarvis and St. Cyr's enemy, She's tall, 25-years old with gray eyes and was considered a spinster until she married Sebastian. Independent minded, smart and not afraid of her father. She's pregnant with his child.
Kat Boleyn: Irish actress now toast of London. Former spy for the French. Sebastian's former lover who is now married to Russell Yates, a privateer.
Russell Yates: Privateer, married to Kat. He's gay and his marriage to Kat is his cover. He's accused of murder.
Charles, Lord Jarvis: Brilliant, ruthless man and cousin to the King. Completely dedicated to the preservation of the House of Hanover, he was considered the power behind Prinny (Prince Regent) weak Regency due to King George slipping into madness. In prior mysteries, St. Cyr had broken into Jarvis' house, held him at gunpoint and thrown a knife at him. They were not on the best of terms and neither trusted the other. He's Hero's father.
Sir Henry Lovejoy: Once the chief magistrate at Queen Square, now the newest of Bow Street’s three stipendiary magistrates, and friend of Sebastian.
Major Rhys Wilkinson: Former Calvary officer and Sebastian's friend who was found dead in Hyde Park. He's married to Annie and the father of their 4-year old daughter, Emma.
Annie Wilkinson: Wilkinson's wife and mother of their daughter, Emma.
Daniel Eisler: Diamond merchant who was murdered.
Tom: Sebastian's 13-year old groom or tiger who is devoted to him because he rescued him from the streets after he saved Sebastian's life. Secures information for Sebastian due to living on the streets and his ability to go undetected.
Paul Gibson: Former army surgeon, an Irishman who shared the battlefields with Sebastian where he lost a leg. Unmarried, he works out of a small surgery at the base of Tower Hill and shares his knowledge of anatomy at St. Thomas and St. Bartholomew's teaching hospitals. He frequently assists St. Cyr, his friend, with his murder investigations and provides an invaluable source of knowledge. He's 32-years old slim, dark haired and of medium height and has an opium addiction.
Alistair St. Cyr, Earl of Hendon: Sebastian's father to the world but in reality he was not. Sebastian recently learned he's not his biological father but the Earl has always known. He is, however, the father of Kat Bolyen, Sebastian's former lover, and allowed Sebastian to believe they were brother and sister. Currently the Chancellor of the Exchequer, in his late sixties with deep blue eyes.
Jenny Davie: Prostitute.
Samuel Perlman: Eisler's nephew.
Abigail McBean: Eccentric friend of Hero, an expert in the occult.
Rebecca Ridgeway: Abigail's sister.
Marcus Ridgeway: Rebecca's husband.
Campbell: Eisler's butler.
Bertram Leigh-Jones: Chief magistrate at Lambeth Street.
Drummer: Young 12-year old crossing sweep (urchin) Hero interviews for her article.
Jamie Knox: Owner of the Black Devil tavern. He's a former sharpshooter for the army and looks like Sebastian and is suspected to be his brother. He's also a reputed smuggler who has worked with Yates.
Pippa: Barkeep at the Black Devil tavern.
Ferdinand Arroyo: Former Spanish priest in Eisler's employ as an agent.
Jacques Collot: French jewel merchant with a wandering eye.
Jules Calhoun: Sebastian's valet. Began his life in one of London's most notorious flash house, some of his unusual talents were of use to Sebastian who made solving murders his life's passion.
Thomas Hope: Banker, antiquary and patron of the arts. Married to Louisa and Henry's brother.
Louisa Hope: Thomas Hope's young, pretty wife. She's a member of the Society for the Suppression of Vice.
Henry Philip Hope: Banker and gem collector. Thomas's brother.
Lieutenant Matt Tyson: Acquaintance of Sebastien from the war, almost court-martialed for murdering a young Spanish mother and children.
Blair Beresford: Louisa's Irish cousin.
Otto von Riedesel: Representative of the Duke of Brunswick (Prinny's brother-in-law) in London. He's a colonel in the Black Brunswick, a volunteer corps serving under the Duke.
Prinny: Prince Regent, future George IV.
Morey: Sebastian's butler.
Benjamin Bloomsfield: Wealthy elderly friend of Hero with a knowledge of the diamond trade.
Henrietta, Dowager Duchess of Claiborne: Lord Hendon's sister, Sebastian and Amanda's aunt.
John Francillon: Lapidary and London gem dealer.
Judah (Jud) Foy: Disheveled man who seems to be following Hero. Former rifleman.
Morgan Aldrich: Ruffian who Sebastian encountered at Eisler's home.
Piers Aldrich: Morgan's younger brother, also a thief, who was also at Eisler's home.
Elsie: Young street sweeper interviewed by Hero.
Aiden O’Connell: Irishman spying on the English for the French.
Paul Miette: French jewel thief suspected of stealing the French Crown Jewels during the Revolution.
Carl Wilhelm Ferdinand: Duke of Brunswick. Husband to George III's sister, Princess Augusta, and Caroline's father.
Princess Caroline: Estranged wife of Prinny, sister of the Duke of Brunswick
Georges Danton: Leader of the French Revolution, suspected of arranging the theft of the French Crown Jewels
(hide spoiler)]

Mod
Siiiiiiiigh, why is Kat back? lol

I feel your pain, Kris.

Maybe this will be the book where Sebastian finally realizes that just how deceitful she is.

Mod
Veronica - sorry I missed your comment!!! Thank you I needed some sympathy.

Maybe I'll be able to start this one later today....here's hoping.

I finished and enjoyed it very much. Really having to restrain myself from going straight into the next one!

Mod
I kinda feel like I'll be in that same boat, Phrynne:)

It's hard! I am accustomed to binge reading a series once I find one I really like:)

Mod
Couldn't resist posting this as this series keeps referencing Hero's carriage. I needed to see it! 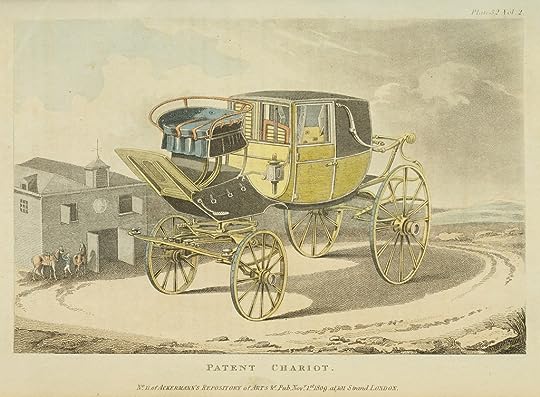 Wow! Imagine getting in and out of that elegantly in the dresses they wore!

Mod
Yeah, now I see why they needed footmen.

Thanks so much; I thought I had an idea, but this is really the top of the line model, as it would be for Hero. Wow!

Oh, I meant to say that I finished this book this afternoon. It was great.