I'm looking for another good book. So good that you can't put it down.

What are some of your favorite books that you couldn't put down?

One of mine is Dan Brown's Da Vinci Code. It was a very good book. I recommend it to anyone who hasn't read it yet. Take a trip to the library. Check it out and read it. Or head to the book store. Buy it. Read it. It's great.

Let me know what some of your favorite hard-to-put-down books are. Ready. Go!

What type of genre are you into?
I absolutely looooved Where Rainbows End by Cecelia Ahern, even though i'm not particularly fond of romance!!!

J.F. wrote: "What type of genre are you into?
I absolutely looooved Where Rainbows End by Cecelia Ahern, even though i'm not particularly fond of romance!!!"

Do you like science fiction? I couldn't put down Unhappenings by Edward Aubry. It's a book about time travel.

If you would consider reading 2 books in the sex addiction category and giving a review of each, I would give you my 2 books. details of them are on Amazon at https://www.amazon.com/s/ref=nb_sb_no...

if interested, email me with details of where to send them at dann.aungst@gmail.com - this offer also goes for anyone else reading this post.

I like reading just about everything, but I've been going through a huge romance craze lately. I couldn't put down Forever Enchanted. I ended up spending a day off just reading it in bed, it was so good.

I am also a big reader of pretty well everything. Right now I have been reading Me Before You by Jojo Moyes. It has been a while since a book kept me up to the wee hours from excitement of what will happen next. I can see why my library has 200 holds on it, even though I scooped it right off the shelf. I was meant to read this book.

Samantha wrote: "I am also a big reader of pretty well everything. Right now I have been reading Me Before You by Jojo Moyes. It has been a while since a book kept me up to the wee hours from excitement of what wil..."

How is that book so far? It looks pretty good and I'm unfamiliar with that author. I included it on my to-read list. :)

I find John Irving's books very addictive, particularly The World According to Garp.

If you're into science writing, I would highly recommend the book Life on A Young Planet: The First Three Billion Years of Life On Earth, by Andrew H. Knoll. As the title says, the book is about how for most of Earth's 4-billion year history, life was entirely microbial. A fascinating read.

This happens very rarely to me (partly because I read small amounts at a time nowadays). Wild Swans: Three Daughters of China was probably the last that I devoured. Fairly big book, maybe 500-600 pages, and I devoured it in 2-3 days.

Fair to say, though, it splits opinion down the middle. Lots of people love it, lots of people (mostly Chinese) think it's false history. Last time I was on Amazon checking reviews it had a slew of 1 and 5 stars.

It tells the tale of three women living through modern Chinese history, from the civil war between the Nationalists (who should've won but cocked it up) and the Communists. It goes down to around the 1980s or 1990s, I think.

Thaddeus wrote: "This happens very rarely to me (partly because I read small amounts at a time nowadays). Wild Swans: Three Daughters of China was probably the last that I devoured. Fairly big book, may..."

I read Hart Broken in 5 hrs and couldn't put it down :)
in a different genre, Kane and Abel was always one of my can't put down!

I just finished One True Loves by Taylor Jenkins Reid. It was very good and definitely hard to put down. I should browse through my never-ending list of books to read and find another good one, but I need some recommendations.

Can anyone recommend any fiction, mystery, horror, or thriller books that you really enjoyed and were hard to put down?

I have read several 'can't put this down' books! But you should try Captured by Erica Stevens...it's awesome although it does have romance...but I seriously loved it so much I've read the series multiple times.

Megan wrote: "I just finished One True Loves by Taylor Jenkins Reid. It was very good and definitely hard to put down. I should browse through my never-ending list of books to read and find another good one, but..."

Have you read the Mara Dyer series? I'm sure you have...but if you haven't I really did love them. Also have you read Between the Devil and the Deep Blue Sea by April Genevieve Tucholke? It's pretty good.

I also couldn't put down Kane and Abel as well as the Bernard Cornwall series The Last Kingdom. And of course the Harry Dresden Files. Will be checking out some of the recs here too.

I'm looking for another good book. So good that you can't put it down.

What are some of your favorite books that you couldn't put down?

Although I am an avid reader and prefer reading to watching TV, surfing the web or playing video games, I will quickly put a book down if an opportunity arises to do something more interesting and enjoyable. That said; here a few of my favorites that you might find worthwhile reading.
Listed in alphabetical order by author, not preference.
The Five People You Meet in Heaven by Mitch Albom
Clan of the Cave Bear by Jean M. Auel
Deception Point by Dan Brown
The Stolen Child by Keith Donohue
The Morning River by W. Michael Gear
Coyote Summer by W. Michael Gear
Lord of the Flies by William Golding
Never Let Me Go by Kazuo Ishiguro
Remains of the Day by Kazuo Ishiguro
Aztec by Gary Jennings
The Stand by Stephen King
No Country for Old Men by Cormac McCarthy
The Inverted World by Christopher Priest
The Godfather by Mario Puzo
The Catcher in the Rye by J.D. Salinger
The Jungle by Upton Sinclair

I recently read, The Five Times I Met Myself and absolutely loved it! Lost a lot of sleep since I simply couldn't put it down.

And far too many pulp-fiction western novels to mention... :D

I went through a Rainbow Rowell kick recently - she writes YA/Adult books about awkward people navigating relationships and I am constantly hooked! I became seriously sleep deprived, til I ran out of books of hers to read.

I've just finished reading The Rosie Project. The story is hilarious. it made me.laugh out loud and I shed a few tears. an excellent read and I highly recommend it

Before you judge me by recommending Patterson! I know a new book every week! However, if you pay attention to is the co-author. I have read all the private series and many have let me down. Private London and Berlin had me hooked. They are co-written by Mark Sullivan, who has his own series, which I also recommend.

I mostly read bits at a time. I don't often have the time to just sit and read. The last book I had that experience with was Relationships. It's very well written.

Both fantastic novels by amazing authors.

Yesterday I began reading a book that is totally one that can not be put down. It is hard to face that the facts of the book happened, but they did. It's a book that needs to be read. The content grips one in a manner that is difficult to put into words. I have to tear myself away in order to do other work.
The book is A Damaged Mirror, stay tuned for the book review.

I'm absolutely thrilled to share with you all this years unique interactive Christmas Advent for booklovers!! If your looking for gifts or treating yourself, dive right into our Advent Calendar full of fabulous books from so many amazing authors for Christmas Gifts or for you to enjoy, special offers too!

Enjoy!
http://beckvalleybooks.blogspot.co.uk...
Please note: image below is NOT the live version.﻿ 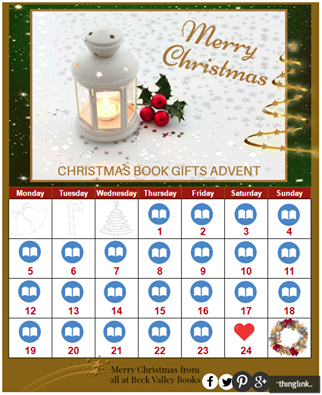 I will suggest "Life or Death" by Michael Robotham.
'Audie Palmer escapes from a Texas jail the day before the end of his ten-year sentence ' This line was enough to excite me to read this book and I really loved it as this is now one of my favourite books. There's another in my favourite list. I don't know you will like it or not as this one is from Indian Author 'Ravinder Singh' . His debut novel 'I too had a Love Story' is a record bestseller, based on true story, this book will surely make you cry.

Ketchup CloudsI couldn't stop reading and re reading. Honestly, may not be the genre U go for usually but definitely give this a try