{Bend The Light ~ Control The Dark} An Original RPG discussion 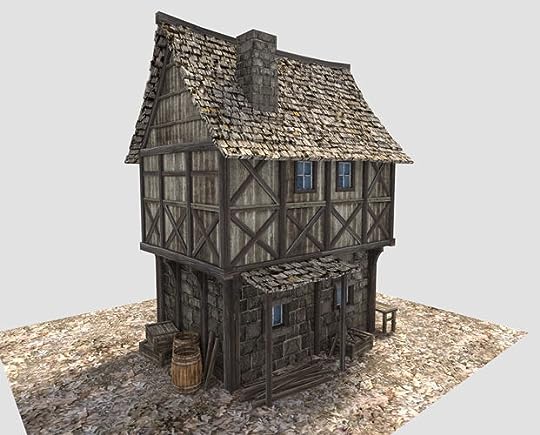 Agur grunted as he pulled open the door to the house and gave Mason a shove inside. Mason didn't stumble, but wasn't prepared for the smack across the face when Agur turned around. The force of it snapped his head to the side, and he glared at his father. Agur spoke first. "What made you think you could just run off like that?"

Ebony slipped in before the man slammed the door shut. Lucky for her, the house was dark, so she hid in the shadows. She watched Mason getting beat, wincing with each hit. She only grew angrier and angrier at the man.

Mod
Three years ago, at the age of fourteen, Mason had run away from this place to become a palace guard. He had managed to avoid his father in those three years, but he had made a fatal mistake by coming to the town today. "I had to get away from you," Mason said as he stepped back. He hurt, but he was still a lot physically stronger than his fourteen-year-old self. Psychologically, no. Agur stepped forward and hit him again, forcefully enough to make Mason stumble back into a small table at the end of the hall. He grunted as a corner jabbed him in the side, feeling the force of his father's anger at him. He couldn't find the will to fight back against his father; this was what he had grown up with and what he was used to.

((Nah, but maybe Mason should))

Ebony struggled to keep her breathing under control in her anger. "I had to get away from you." Mason, shouted, and then the man - probably his father - hit him again, and she knew if he did again she'd snap. She moved up behind him as Mason backed into a table. She could see in his eyes that he wasn't going to fight back, so she slid a small knife nearly soundlessly from its sheath, and stepped behind the man, holding up to his throat. "Don't you dare hit him again," she whispered into his ear.

Mod
"What is this?" Agur growled. Mason looked up and his eyes widened at the sight of Ebony holding a knife to his father's neck. "What-- Ebony?" He stood up, wincing from the pain in his side as he did so, and walked behind his father. Although not moving, Agur growled again. "Mason, get this girl off of me!"

Ebony met Mason's gaze, questioningly, not sure what she should do now. "Nah," she said sarcastically in response to Agur.

Mod
((Sorry, that post was a little confusing. What do you think should happen now?))

Mod
((Agur could get free and attack her? Or Mason could end up being a real prick and actually do what his father said (probably not). Or they could make Agur go into a closet or something. Or Mason/Ebony could knock him out with the butt of the knife. Or something else))

((Sorry I took forever to respond. I think it would be best if Mason took the chance to knock his dad out while he's distracted by Ebonys sudden appearance ))

Mason conveyed with his eyes to Ebony to trust him as he snatched the knife from Ebony's hand and, with a quick motion so his father couldn't react, firmly hit the back of Agur's head with the butt of the knife: knocking him out. He watched as his father fell to the floor with a grunt, and after a minute Mason turned to Ebony. He studied her, not knowing what to say, and held out the knife to her, handle first.

{Bend The Light ~ Control The Dark} An Original...