Age (Human years please): She's immortal but she always looks somewhere around 20 when she appears

Tribe: None- she's a goddess

Rank: Goddess of the mind

Description of scales: She has elm-shaped, crystal scales, jaggedly sharp at the edges, and a rippling sensation when looked at; they can change color. If Luna brushes against something the wrong way, that thing will be cut by the razor-sharp scales. Normally, her scales would be a glowing, bright turquoise color. 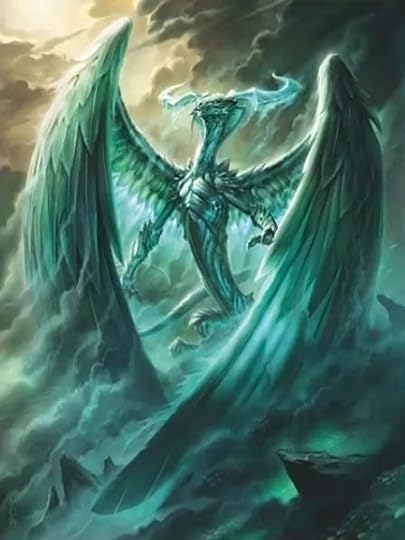 She has razor-sharp solid diamond claws, thick, feathery wings that are made of crystal feathers that are impossible to penetrate, and a tail with huge diamond spikes at the end capable of impaling things. Her hide is impenetrable. She is very light despite being made of crystal and diamond. She is always shrouded in a mysterious mist that also changes color.

Personality: She loves to learn and fight. Though, she is suspicious about those around her and you have to earn her trust if you want to be her friend. She's kind, caring, diligent, and basically everything good you can think of. Throw in cunning, intelligent, and sometimes vengeful, you get Luna.

Weaknesses: during her early years she had a fight with a big dragon, who broke her hind left leg. It's healed now, but the bone is cracked so if hit hard enough, she won't be able to use her left hind leg.

Does your dragon have any specific fighting strategies, if so, what?: She prefers to use cunning to win a battle, for example manipulating the enemy, or messing with their mind before attacking. Also, she uses her freezing breath that can freeze a dragon up to two minutes.

Special ability (None too OP): She can mind control others, creating fake emotions or making the other think something they normally won't. She can also attack with her mind, making her enemy go mad for around 30 seconds. She is immune to any mind control or mind attacks. Since she's also the goddess of time, she can control time, stop time. She is immune to time-freeze and the passage of time. Also, she can teleport. But she can only teleport within one kilometer from the place she is at once.

History (Optional): She was a normal Grayclaw warrior before the big change happened. She was out hunting when a big snowstorm blew the hunting group apart. The rest of the dragons made their way safely back to camp, but Luna was blown into the outskirts of the new world, into a giant mountain (The tallest mountain, in fact). There, she met Time himself. Time helped her and granted her powers, seeing she persisted through the storm and didn't die. Time, eventually headed back to his own domain, another dimension. To honour time for helping her and changing her into a goddess, Luna had her temple build directly on the mountain where she'd met Time. The sky there has been clear ever since.

Family (Put "Open" if looking for family): Luna is Saphira's mom, but otherwise it's open

Age (Human years please): Immortal. Appears around the age of 20

Rank: Goddess of reality and beyond reality

Description of scales: Small, elm shaped scales that ripple across her body. They are extremely hard, and change color through all the different shades of blue, turquoise, aqua, etc. Each scale's razor sharp edge is coated with poison, if handled the wrong way the scale will cut into flesh and the poison will cause a lot of pain. Her feathered wings are like diamond; each feather is rock-hard and extremely sharp.

Appearance (Do include armour, necklaces etc if your dragon has any):
Wafflez..?

Personality:
Singularia had always felt different from the other dragons. She thinks rather deeply, and to others it's like she exists on another level of reality; a deeper, purer, and clearer level. It is like she has a third eye, one that can see things that others can't. One that can see when she's blinded.

She has always had a sixth sense, one that she couldn't describe. The sense has saved her in the many times she encountered near death situations. The sense warns her of danger, and also others' intentions and feelings. She sees the world differently from most dragons, exploring the nooks and crannies of the world she resides in.

She is more of an inside dragon, who socializes less than the other dragons. She can tell what others are thinking just by observing their facial expression and body movements. Singularia speaks her mind, unafraid to express herself when she speaks. She asks less questions; speaks more statements.

She is very highly intelligent, and will look to the cunning and trickery side in combat than the brutal side. She will often look for one's weakness before making a move. She can look incredibly intimidating when she wants to.

She is an incredible secret keeper and has very few friends. She trusts no-one, not even her friends. She enjoys to spend time alone at night outside her den, just staring up at the moon and pondering much things.

Singularia is ever diligent, always learning, thinking and trying to do more than expected from her. She will take hunting, fighting, and patrolling to the next level; a much more improved and efficient way.

She is wise beyond her years; she can persuade someone extremely easily, or put thoughts into one's head like nobody's business. She is a very skilled dragon in the art of arguments and always seems to win the arguments. She is not likely to lie, but when she does, she gets away with it since she has observed how liars act and she will act opposite.

Weaknesses: Electricity, it makes her seize up and become paralyzed

Does your dragon have any specific fighting strategies, if so, what?:
She usually takes place in the center of the battlefield, since her scales are like impenetrable armor and extremely sharp, cutting any enemies that brush against her. She uses her razor-sharp claws and sometimes uses the crystal horns on her head. Her sharp feathers can be fired into the enemy ranks, causing chaos.

Special ability (None too OP):
Being the goddess of reality and in reality, Singularia can manipulate and create matter, making things pop out of thin air with just a thought. She can change reality, which means she can turn life into your worst nightmare, or your best dream. There is also a world beyond reality, which she controls also. She commands the beasts and spirits if the world beyond reality, and those creatures are only loyal to her. She can teleport long distances, and bring anyone with her if they are touching her. She is the only one who knows the answer to life and death, and she can control anything within the realms she rules: reality and in reality. She is the one who makes dreams come true; nightmares take place when not sleeping. In combat she can teleport her enemies back and forth through bother her dimensions, disorienting them and blinding them.

History (Optional):
She never knew her parents. She, as an egg, was abandoned on the edge of a cliff in danger of falling off when the cracking started. Time himself, saved her and dragged her into the dimension he lived in; Kayin. There, Time acted as a foster parent and always stayed by her side as she grew up. When she grew into an adult dragon, Time granted her abilities and made her goddess of reality and in reality. He told her about another young dragon he'd saved, one called Luna. He urged her to find Luna and work together, as the forces Luna possessed were very powerful with Singularia's. Time then took her to the in reality, dream, nightmare, imagination dimension: Nebulea. He told her, being the goddess of reality and in reality, she had total control over this dimension. She could make things pop out just by a thought. After this, Time left her in Nebulea and went back to Kayin, as he had work there to do. Singularia eventually made her way out of Nebulea and into the real world.