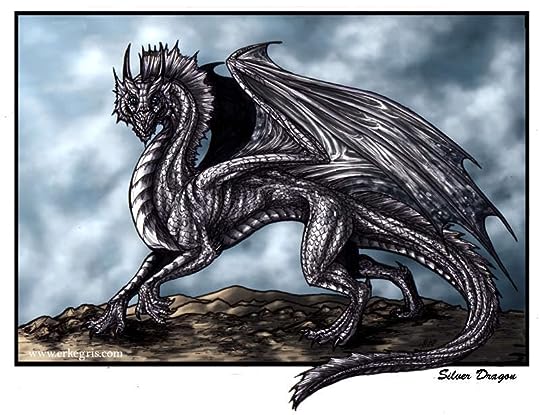 Physical description: Blue eyes, stormy gray scales, and large wings greet you when you look at Stormswift. He was born with a slight limp: His front left leg came out funny, and it doesn't have as much strength as his other legs.

Personality: Calm, bold, protective of his Queen and tribe. Would fight to the death for his family and tribe. Stormswift is a fair ruler and tries to make time for everyone.

History: To be RPed

Likes:
-His tribe
-The way he rules
-His Queen

Weaknesses:
-His Queen
-His protectiveness of his tribe
-His front left leg

Fighting strategies: Using his ability to manipulate the winds, Stormswift will make himself faster than his actual wings can, and zip towards his opponent, attacking faster than they can usually react.
Special ability (None too OP): Can move clouds at will (creating cloudy or clear skies, fog, etc.) with little energy. Can manipulate the winds with little energy, but can't make full-force tornadoes by himself.
Family: Open
Other: Good friends with Typhoon, one of his High Guard. Physical description: Large wings, blueish gray, pointy snout. Spikes are all over his head and directional fins go down his spine to his tail.

History: Typhoon usually scoffs at other dragons when they comment on his name, because he doesn't really believe he's that good, but he is. He's a great fighter, and he's very loyal, which is why he was promoted to High Guard. Typhoon has a loving family which he does his best to protect. He's good friends with Stormswift.

Fighting strategies: Blow dust, sticks, and general debris into the face of the enemy, then attack.
Or, attack his opponent using the winds to speed him up so it's a surprise.
Special ability: Can manipulate the winds in almost any way with some energy sapping. Can't do it from long distances, though.
Other: N/A

Name: Aigean
Age (Human years please): 5
Gender: Male
Tribe: Windclaw, born a waveclaw
Rank: Apprentice to be a warrior
Description of scales: His scales are large with yellow and turquoise, and his wings look like those of a butterfly sort of
Appearance (Do include armour, necklaces etc if your dragon has any): Aigean is the right one 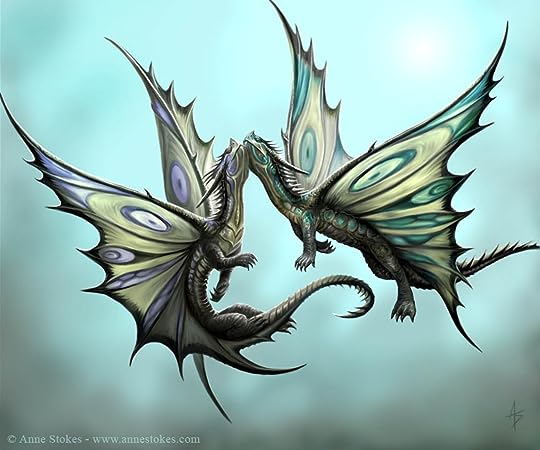 Personality: Aigean is cool and calm. He never lets his anger control him, and tries to always stay optimistic and happy. He loves fiercely, and has no trouble showing it, but he fears rejection. He's quick to make decisions, but he still puts thought into them.
Strengths: Flying, fighting
Weaknesses: Rejection, reading (he can't at all)
Does your dragon have any specific fighting strategies, if so, what?: Aigean attacks with his water from a long distance. He does it quickly for a dragon born with water powers, but not nearly as fast as the windclaws.
Special ability (None too OP): Minor control of water, but only when it's warm
Likes (at least 3): Flying, swimming, being with his "sis"
Dislikes (At least 3): Rejection, fire, his slowness
History (Optional): He met Wybern at a young age, both of them orphans, and claimed her as his sister and switched tribes
(They don't know it, but they're really half siblings.)
Family (Put "Open" if looking for family): Wybern, his adopted sister, and his 2 dead parents

Name: Wybern
Age (Human years please): 5
Gender: Female
Tribe: Windclaw
Rank: Apprentice, training to be a scholar
Description of scales: Large yellow and purple scales, with butterfly-like wings
Appearance (Do include armour, necklaces etc if your dragon has any): Wybern is the left one

Personality: Wybern is confident and fast. She can be calm and friendly or angry and harsh, having no in-between. She loves strongly, but doesn't have the easiest time showing it. She refuses to be kept controlled, and rebels at all times, even in the littlest things.
Strengths: Reading, writing
Weaknesses: fighting, harnessing her powers
Does your dragon have any specific fighting strategies, if so, what?: She only ever fights with words, but can sometimes manage to get her wind to keep enemies at bay
Special ability (None too OP): Her powerful winds, that she has no control of
Likes (at least 3): Her brother, flying, fire
Dislikes (At least 3): tricks, authority, most other tribes
History (Optional): Shee met Aigean at a young age, both of them orphans, and he claimed her as his sister and switched tribes, now they are inseparable.
(They don't know it, but they're really half siblings.)
Family (Put "Open" if looking for family): Her adopted brother, Aigean

Description of scales: Unlike other dragons, she has a wide spectrum of blue and beige feathers that are fireproof and rather warm. 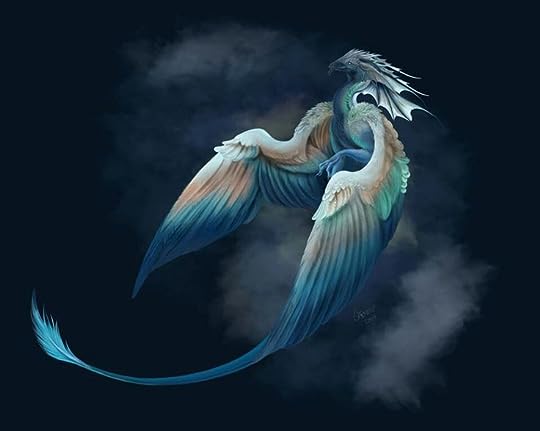 She is a very small dragon, and very light as her bones are hollow. She can duck and maneuver effortlessly, and somehow she is immune to big winds, hurricanes and tornadoes blowing her around.

Personality: Tea is a quiet dragon, but that doesn't mean she doesn't talk alot. She talks, but very quietly, and she never seems to get mad no matter what others say. But, under her mask of a timid dragon a fierce dragon lies, one with the skills of manipulation, excellent fighting, acting, persuasion, and much more. When she makes decisions she likes to call a council, and discuss the matter with the king, lieutenant, lieutenant's mate, and sometimes the head guard. Once she makes a decision, it is impossible to persuade her into changing her mind, unless she changes her mind by herself. Tea is a very mind-strong dragon and can resist mind control and mind reading. She is a fair queen and will make sure everyone gets their share and is treated fairly, though she will be firm when ruling.

Weaknesses:
-Her feathers are not as hard as dragon scales, rendering her somewhat more vurnable
-Threats to the king
-Too much pressure

Does your dragon have any specific fighting strategies, if so, what?: Tea, being a small and fast dragon will first zoom around the enemy's head, disorienting them, then she will attack with her razor sharp claws. Since she's vurnable to other dragon's claws, she manipulates the air around her so that if any dragon strikes at her, the air currents will carry her a safe distance away from the opponent.

Special ability (None too OP):
She can manipulate air flows and currents, making it easier to travel. Also, she can fly up to extremely fast speeds, being a Windclaw. Since she's a demi-god, child of Zen, she has enormous amounts of energy, unlike other dragons. She also has to rest shorter times than normal to regain all her energy.

History (Optional):
Tea is a demigod, a daughter of Zen, goddess of rest and energy and some other Windclaw. She trained as a warrior, but her skills and intelligence brought her to the lieutenant rank. One day, the previous Windclaw queen went missing. Consumed in grief, Tea asked her mother to look after the previous queen if she died. Tea promised to the previous queen's soul that she'd be a good queen, and rule fairly.

Description of scales: Zen's scales are the strangest scales you'll ever see. They reflect his mood sometimes, and other times reflect the time of day. They can actually change color and dazzle other dragons easily. 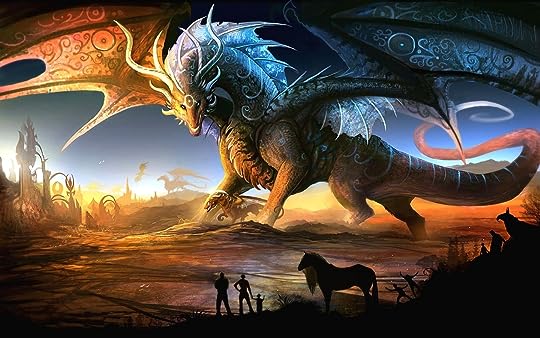 Personality: Zen is calm and peaceful, despite his position, and his personality is how he got his name. He was calm even as a Hatchling. He doesn't like fighting or wars, but he can definitely handle himself in a battle. He's very smart and kind. He would much rather have been trained to be a scholar, but his path was chosen for him. He doesn't speak up often unless he knows something is wrong.

Strengths: His personality, his actual strength, and his abilities.

Weaknesses: Fire and extreme heat bothers him more than it does other Windclaws.

Does your dragon have any specific fighting strategies, if so, what?: He creates tornados to disorient and capture his enemies.

Special ability (None too OP): He can create large tornados with his wings with virtually no energy, since he's just flapping his wings a certain way.

Likes (at least 3): Flying fast, racing with other Windclaws, visiting his friends, reading, and studying the stars.

Dislikes (At least 3): When dragons treat each other badly, wars, unrequited fighting/arguing, being told what to do when he feels it isn't the right thing to do, his past, and making promises that he ends up not being able to keep.

History: He doesn't speak of his history to anyone. Not even close and trusted friends. He rarely, if ever, even thinks about it to himself. 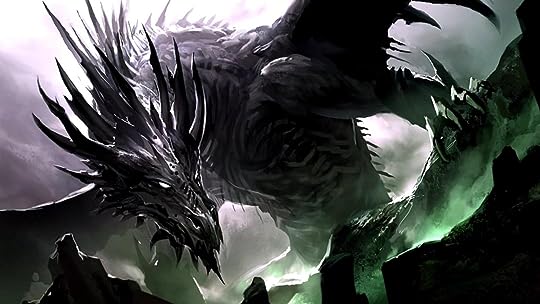 Personality: He is easygoing most times. He is nice to be around and loves a good fight or challenge.

Weaknesses:
-Can be lazy
-Prideful
-Not as strong as most


Does your dragon have any specific fighting strategies, if so, what?: Kill before they know your there

Special ability: Can pivot at any angle, so even up close he can turn so sharp that he can circle an enemy at full speed.