Description of scales: Black obsidian dagger-shaped scales, around the edge of each scale a small bit of fire flickers playfully. Igneaus' scales that run down his spine can be broken off and used as daggers - very sharp and lethal. Once a scale falls/breaks off, it grows back very fast. 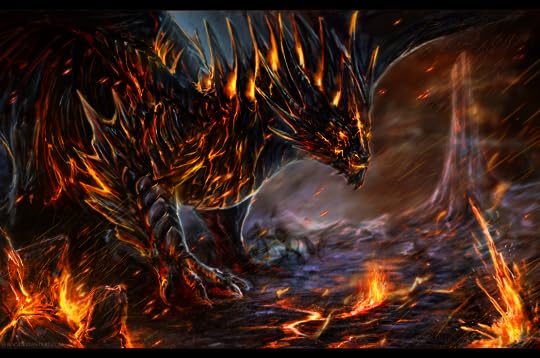 Personality: Unlike most fireclaws, Igneaus is slow to anger. Not many things make him angry, as he has lots of experience dealing with annoying customers and dragons bugging him for a trinket or something. He is very straightforward with things, speaking his mind and not afraid to interrupt others to voice his opinion. He is an expert debater, since he barters with other dragons all over Arenia for wares and trinkets. He tries to be kind most of the time, and he is sometimes timid.

Strengths: He is very strong due to time in the forge, he can draw energy from fire, he can summon helpers made of flames, debating

Weaknesses: Water, it doesn't hurt him but it annoys him somehow, There is a scar on the inward side of his hind left leg - very small, but it exposes his skin, which everywhere else is covered by the impenetrable obsidian scales

Does your dragon have any specific fighting strategies, if so, what?:
Special ability (None too OP): Ingeaus prefers not to fight, but when he does he prefers to stay at a distance, throwing the dagger-like scales from his back at his enemies, not to mention he has an hawk-eye aim.

History (Optional): His father was a forager, who traveled the world. As a hatchling, Igneaus was fascinated by the things his dad would bring back. As Igneaus grew up, he began training as a forger, since he was good with metal and forging, also since he had opposable thumbs. When he got older, he began trading with other foragers, sometimes he traded what he made in the forge. 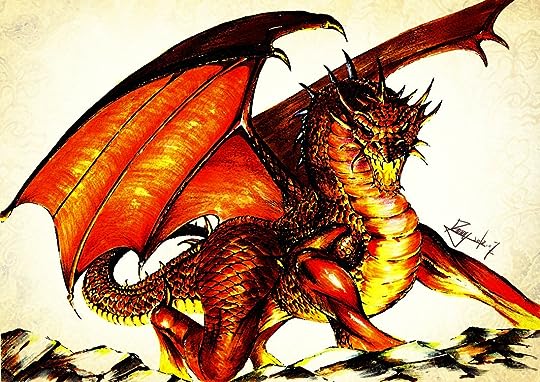 Physical description: With molten-hot scales, and strong, muscled legs, you could swear you'd see flames flickering in this dragon's eyes. Molten has fiery orange wings and large spikes around his head that trail down his spine.

Personality: Molten is known for his easily angered personality and ruthlessness in battle. You wouldn't want to anger this dragon, for he is a mighty foe. He is partially this way because of his still unknown mate, which he would fiercely protect and treat lovingly.

History: Molten, as a hatchling, was bullied somewhat because of his small size. His parents didn't seem to care, and when he became an apprentice, he started to train and fight back. By the time he became a warrior, he had no more bullies. His doesn't visit his parents and they don't visit him for reasons he doesn't understand.

Strengths:
-Fighting for long periods of time
-Physical strength
-Breathing lots of fire at one time

Weaknesses:
-His parents
-His mate
-His past

Fighting strategies: Shooting fire at an opponent's face to blind them, then rake with claws. If in close range, he'll retract his wings and use his spikes and claws to injure his opponent.
Special ability: Able to shoot spikes out of his tail and head, but it takes energy. Can manipulate fire with not much energy, can evaporate water with concentration.
Family: Open
Other: N/A 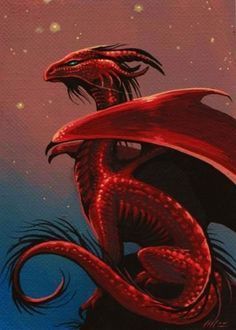 Personality: Abrean is much like fire. She's impulsive and brash. She is quick to decide whether she likes someone or hates them, and there is not in-between. She loves and hates with a burning fire, and will burn the world to ashes for those she loves. When she gets angry, you better run for your life. Once she's decided she hates you, there is no way to change her mind. She is stubborn and hates being talked down to, and when she is, she rebels with all her strength. She's clever and strong after centuries being alive.
Strengths: Ruling, Outsmarting enemies, fighting
Weaknesses: Being talked down to, The dragons she loves, her impulsiveness
Does your dragon have any specific fighting strategies, if so, what?: Abrean is clever and fast when she's cool headed, but when she's angry, she relies on pure strength and slows down
Special ability (None too OP): Her fire
Likes (at least 3): Flames, fighting, little dragons
Dislikes (At least 3): Being talked down to, her enemies, betrayal
History (Optional): Abrean was raised as a typical heir, to be the leader she is. She hasn't been queen long, and ascended the throne when the previous queen died, as they all do.
Family (Put "Open" if looking for family): OPEN

Description of scales: Fear's scales are nearly pure fire, but are so cold they burn. They're long and sharp and could slice through a thick tree easily. 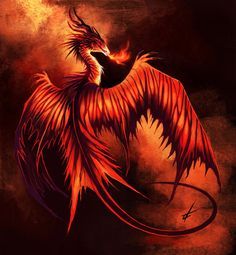 Personality: Fear is cold and hard. She isn't much of a social dragon, but she will attend necessary events for her position. She has yet to find a mate, and isn't actively searching, as she trusts the queen to not die or go missing any time soon. She often watches apprentices train, and will tag along with scouting groups.

Strengths: Her many hidden talents, and that she cares for no one but her friend, the queen.

Weaknesses: She can be to nonchalant at times and more often than not she let's her guard down with other-tribe dragons

Does your dragon have any specific fighting strategies, if so, what?: She doesn't really, but she likes brute force rather than fire

Special ability (None too OP): Unlike most dragons, she has the strange ability to directly heat up water, even from a great distance. She doesn't often do it though, as it uses a lot of energy and she's virtually useless after she does it more than twice in a row.

Dislikes (At least 3): Anyone that causes unnecessary trouble, disrespectful dragons, and loud dragons. 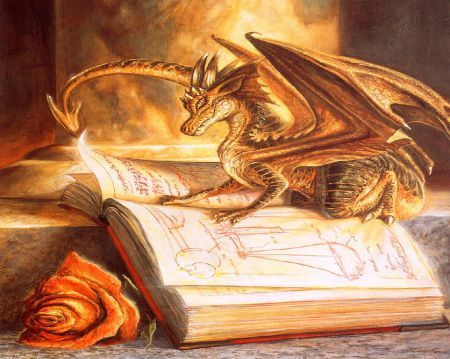 >>>Personality<<<
Aurrie is a solid friend and is way too loyal for her own good. She has easy control of her temper and feels happy most of the time. She's bright and cheerful and very optimistic. She's smart, mostly booksmart, and always has her nose in a scroll. She's kind and sweet and easy to like.
>>>Strengths<<<
Optimistic
Reading
Book-smart-ness
>>>Weaknesses<<<
She's too loyal
She is disappointed a lot
>>>Fighting Strategies<<<
She'll use words if she ever does fight
>>>Special ability<<<
She has blue wildfire, but it's easy for her to control and she never uses it, she wouldn't want to burn the scrolls
>>>Likes<<<
Reading
Scrolls
Little Dragons
>>>Dislikes<<<
Fire
Water
The color Green
>>>History<<<
Aurrie was abandoned as a hatchling and nearly died. She was taken in by her adopted mother and barely survived. She has a grudge against the gods as they "gave up" on her when she was just born.
>>>Family<<<
Open 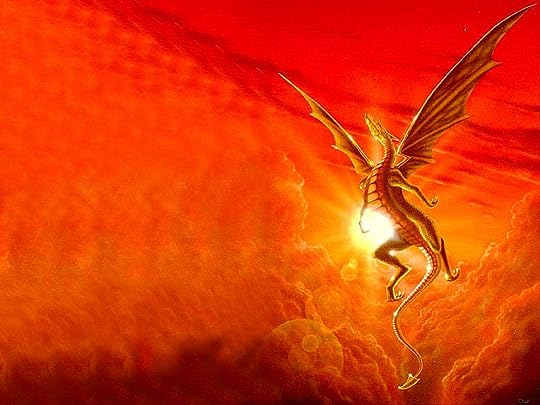 Physical description: Golden, almost orange colored scales. Long wings that help him with flying swiftly. Long tail with a spike that helps for defending himself.

Personality: Humorous, silly sometimes, serious when needed, very quick (even when not flying), protective of his two dragon sisters and mother, respectful to the King & Queen.

History: Ray is the oldest child of his parents. He has two younger dragon sisters and a loving mother, which he loves and protects. He has learned much of his personality from his father, who also helps him protect the family (and the rest of the tribe) by being a Warrior. Ray is very quick, even when he's not flying. He was taught at a young age to respect his elders and the leaders of every tribe unless they were a threat.

Dislikes:
-Water. It dilutes his powers somewhat.
-Any type of threat against his family
-Fish. He prefers birds for prey

Weaknesses:
-Water (dilutes his powers somewhat)
-His family (is protective of them and could be used against him)
-Has a weak spot underneath his chin that makes him feel extreme pain when jabbed. But he protects it well.

Fighting strategies: In close range, he'll attack with his not-very-sharp claws and sharp spike on his tail. He'll also try to burn his opponent with his scales by heating them up. Far away, he'll send fireballs at them.
Special ability: Can heat up his scales so they're burning hot at will without hurting himself. Can breathe fire and control the direction it goes.
Family:
Mother- OPEN
Father, Warrior- OPEN
Sister 1- OPEN
Sister 2- OPEN
Other: A mate, anyone?