Mod
Thanks to Mark for alerting us to October Day by Frank Griffin....


Mark wrote: "I'm presently reading a book titled October Day by Frank Griffin. Not only is it superb, it's very Hamilton-esque, and very nearly in league with Hamilton's finest.

Originally published in 1939, the publisher sums it up thusly...

"It is Sunday, 4 October 1936. Oswald Mosley and the British Union of Fascists are planning to march through the Jewish East End. Over 100,000 Londoners take to the streets to stop them. This is a vivid eye-witness record of 'The Battle of Cable Street'. It tells a gripping story of a famous victory in the history of British anti-Fascism through the eyes of seven people caught up in the events of the day: an unemployed labourer; a bus-conductor; a young woman just out of prison; a policeman; two young Communists; and the titled widow of a beer baron. Their lives suddenly collide on the streets of Stepney. Like Chaplin in 'Modern Times', they are swept along by historical forces they cannot see, in a narrative of struggle that connects a narrow street in the East End of London to the battlefields of Spain and the concentration camps of Nazi Germany."

In his introduction to the 2011 edition, published by New London Editions / Five Leaves, Andy Croft writes: "October Day was seen at the time as an example of the new "Cinematic Fiction" of the late 1930s. Among the best-known exponents of this new and experimental kind of novel were Patrick Hamilton, Arthur Calder-Marshall and John Sommerfield. These romans à fleuve represented a break with the traditional unities of character and plot in favour of a large cast of characters connected only by historical accident."

It ain't every day that I'm able to strongly recommend a book before I've even reached the half-way mark, but today is such a day, and this is such a book. Simple as. " 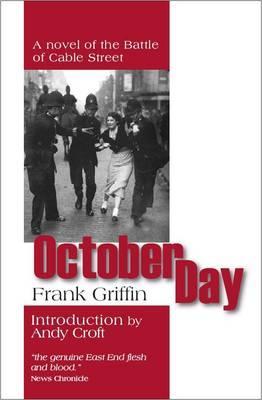 Mod
CQM2 wrote: "It certainly sounds like it shares a lot in common with John Sommerfield and May Day."

Another book I need to read.

Mod
"Mark wrote: "Not only is it superb, it's very Hamilton-esque, and very nearly in league with Hamilton's finest."

CQM2 wrote: "Which is a good thing in my opinion. "

Mod
Interestingly one review on Amazon UK suggests that the Battle of Cable Street has been inaccurately reported...


A Simple, But Sadly Not Accurate, Tale of These Iconic Events
By Dr. R. Brandon
on 9 May 2012

This is a pleasant story of four characters whose lives become intertwined with the events of 4th October 1936, the so-called Battle of Cable Street in East London. The four people involved represent ordinary Londoners; a single policeman, a bus-conductor, a destitute young woman and an unemployed father of four children. There is no Fascist representation. The story takes place on the single day of the events at Cable Street when anti-Fascist demonstrators successfully blocked a march through the East End of London by Oswald Mosley's British Union of Fascists (the Blackshirts). The actual battle was between demonstrators and the police who were attempting to clear a path for the marchers. The Fascists were not involved and eventually decided to march west and disburse.

The style of writing and the portrayal of events is very reminiscent of the work of Patrick Hamilton, although perhaps not quite so accomplished. The book, whilst being unashamedly a novel and a work of fiction, does suggest that the events described at Cable Street, Leman Street and Whitechapel are based on fact and as a result this work has joined the lexicon of left-wing books said to depict the struggle of the working classes. To be fair the actions of the main characters are plausible and the actual riot in the area of Cable Street is also a fair description of events if perhaps a little more violent than contemporary film would suggest. However, as sadly is often the case, subsequent events are altered to suit the left wing point of view of the book. The largely Communist section of demonstrators did later rally at Victoria Park Square but their march along Bethnal Green Road to Shoreditch Town Hall was not triumphant and life-affirming as depicted but was met with cat-calls and insults by the local populace.

Again the book leaves the characters and reader believing that anti-Fascist action was decisive and that solidarity of the working class resulted in a left-wing victory. Actual history was not nearly so convenient. Mosley successfully marched through the East End with his Blackshirts a short while after the events of 4th October 1936 and held a number of large rallies in Victoria Park Square and the Bethnal Green area where some 25% of the electorate supported his candidates.

The book is well written and tells a nice simple tale but should not be taken as a true representation of events.

I've never heard any of that before. Anyone know if what this reviewer is saying is a more accurate reflection of Cable Street?

News reel footage of the Battle of Cable Street in in 1936 where the Sir Oswald Mosely's Black Shirts were prevented from marching through the East End of London by anti-fascists.
Category

Mod
Another video here (which I've not watched yet as it's 40 minutes but it looks good based on a quick gander)....

The magnificent mural in Cable Street in East London, depicts the 1936 battle of Cable Street, when East end residents stopped Oswald Mosley and his fascist followers marching through their streets. In this powerful dissection of what happened, the real battle we learn was three way, between the police, the fascists and local people. Interwoven with eye witness testimony from Bill Fishman, Alan Hudson provides a riveting account of the events, the context and many hidden truths. The official labour movement tried to stop the anti-fascist protests and organised an alternative rally in Trafalgar Square. Lessons for today come thick and fast and we are left to contemplate the mural's contemporary meaning. It may only strike a cord locally Alan explains if we support today's migrant population and oppose all immigration controls.

Thanks hugely for all the sleuthing, Nigel. I'll look forward to sitting down with all of that footage after I've finished the book.

Regarding the accuracy [or inaccuracy] of how the events of 4 October 1936 are portrayed, I really couldn't say, and I'm not so sure that I care. Further, I think that Dr R Brandon misses a very big point in his critique, and that is that the novel [October Day], originally published as it was in 1939, did not benefit from having the perspective which comes only from the distance of time needed to look back in a way that Dr Brandon perhaps wishes it did. In other words, the events of late 1936 weren't yet resigned to the annals of history by the time 1939 rolled round... three years' difference can count as current, in my opinion. You also need to factor in the reality of information not being as readily available and immediately disseminated in the late 1930s as it is in present times, which, if the novel is partly inaccurate from a historical point of view, should be easily forgivable.

He also raised a point about the left-wing slant, which is a criticism that I have absolutely no problem negating. A massive chunk of 1930s London writing falls into the "Red Letters" category of left-wing leanings and sentiment, so to dismiss October Day on that basis would necessitate also dismissing countless other novels, both timeless and forgotten.

Mod
Wise words Mark. I'd add that, even if the Battle of Cable Street has been over mythologised, then so what? With the rise of Nazism and fascism it was important then (and now) to have alternative narratives to show that the fascists were not going to have it their own way - and hopefully that example still gives people the world over inspiration to resist tyranny, prejudice and scapegoating etc. Just based on a cursory glance at the second YouTube vid, it is clear that something extraordinary happened that day.

Having now finished the novel, I can only reiterate my endorsement and enthusiasm... I thought it was a brilliant read, and slots in quite nicely alongside Hamilton, Norman Collins' London Belongs To Me and, certainly, as CQM2 pointed out, May Day by John Sommerfield.

Certain passages may have been a bit ham-fisted, but not so much as to detract from the novel's merits, of which there are many.

Dr R Brandon's assertion that "there is no Fascist representation" in the novel is simply not true. Without wanting to give too much away, I will point out that one of the main characters holds the opinion that a leader with Hitler's qualities is precisely what England needed.

Mod
Thanks again Mark. I can't wait to read it.