Assassins of the Void discussion 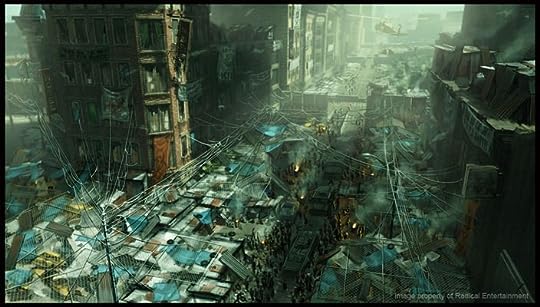 The poorest natives are born here, and raised here. Though every so often a noble will pass through, and pick from the rubble a bodyguard. Because Serkonians are the best fighters in the empire.

Aron pulled his jacket close to him. Searching for something to eat with new pocketed cash. Having just left the ring of street fights about the outskirts. He felt no more remorse for killing in the ring. No rules and it was dog eat dog. Snorting and lifting his peircing blue eyes to a fimilair stand. Bruised produce but better than nothing. Paying for a few things and chomping down on a slightly bruised apple of the sorts. The ache in his stomach stated. Wolf dieing for some protein or something. He grumbled and turned down an alley way. He liked these darker parts more than the bright streets. His sensitive eyes didnt like it. Taking another bite of his apple before tossing the core behind him. Wondering what he might find this time.

In the ally a figure sat slumped against the wall. The figure didn't move, nor make any noise, so it was hard to see him at a distance. He couldn't be heard breathing, but if you focus on him, his stomach and chest could be seen barely moving. The ally smelt of damp dirt and, due to the badly injured figure, blood. His white hair is what stood out more in the darkness. His hand was gripping his wounded stomach in pain. Fuck, he really shouldn't of messed with The Outsider. He'd have to get him back for this. If he survived, that is. He did attack the Void's heart, which should of killed The Outsider. Hopefully.

((Sorry it took so long for me to reply btw! I was having internet problems :( But they should be better now!!))

Aron walked carrying a bag of produce in one hand. Damp scents all around as he walked. Always on gaurd and looking. It wasn't long before a familiar scent hit his nose. Coppery and fortunately very fresh. His wolf side perked at the idea of an animal that may be wounded but it was far to human smelling. Tempted to turn and walk back the other way but it was curiosity the intrigued him. How bad was it wounded? Was it even alive? Well it was enough to work the Werewolf into a steady walk up to find this scent's owner. He wasn't all bad. A street fighter not a heartless prick. Sniffing around a few moments. Locking on the scent and heading down a few allies. His precise wolf eyes finally seeing a figure that seemed tiny compared to his tall stature sat down and slumped. Nudging the body with the toe of his boot gently. "You dead?" Well if he was better take him to the funeral parlor it was the respectful thing to do. Even if he wouldn't admit it.

The moment Axis was nudged, his red eyes snapped open. He quickly pulls out a blade with his other hand and points it directly at the other figure. It was obvious he wasn't able to fight and defend himself, but he was still willing to try if he had to. He swallows down some blood, continuing to glare harshly at the figure as he mumbles,"State your name and business immediately."

Aron stepped back and he gazed over the blade. "Taking a werewolf on with that wouldn't be the best idea kid." The blade might as much scratch him but nothing more. "Walking home and saw your bloody carcuss." He replied bluntly not to keen on giving out his name to this guy. It could end badly. He didn't intend on having his throat slit while sleeping but this guy was defensless and practically dieing. His Mom would so smack him if she were alive if he just left this albino runt to die after seeing the shape he is in. Not entirely scared either. "I think I could help you out with those wounds but by the way you seems your not to keen on it."

Axis pants, keeping the blade pointed at him just to be safe as he glares at him harshly,"And why would you want to help me, what exactly would you get out of it, mutt?!" He loved dogs, but he was the High Overseer, many people wanted him dead, so he couldn't let his guard down.

"It be easier to leave you. So much easier but letting you die when I could help you wouldn't settle to well with me." Bluntly honest. He was a mutt so no denying that he wasn't born just bitten by a wolf. "Call it a belief thing or something but compared to the others here. It'd be best to accept my help before your robbed or raped by the lowly scum here."

Axis tenses, glancing away before he slowly lowers the dagger. Damn mutt was correct, he was completely exposed out here. He glances down, sighing before he mumbles,"Fine, ill accept. But not because of what you said! Just because I don't want to bleed out in an ally."

"I doubt anybody would." Seemed like a pretty lame death to him. He'd prefer dieing fighting till his last breath of dieing than some crummy alley way. Holding his hand out for the other to take. Doubting the runt could walk. Might have to carry him. At least he wasn't a fat ass and would be easy to carry.

Axis eyes it before he grabs his hand and pulls himself up. He grunts at the pain, gripping his wound tighter as he leans against him. Now that he was standing up, his gaze was blurry from the pain and blood loss.

The wolf felt a smirk pull at his lips. A small tug and runt in his arms. "By the tell of your scent and you body drenched in blood. Relax and just hope I don't drop you." He had the other bridle style. Best to get going before runt died or passed out.

Axis grunts,"Yeah, thats fucking reassuring." He mumbles, glancing away as he continued putting pressure on his wound. His head hurt too, but again, that was probably due to blood loss. If The Outsider survived, he better hope Axis didn't find him and kill him while he's weak.

He only rolled his eyes and began the journey back to his home. He had more than enough supplies there to patch runt here. shimining out of his jacket he gave it to Axis. "Hold it to your wounds." Better ruin it than shifting and ruining it. It one bound and he was easily leaping ledge to ledge. It was quicker. Even if it was very very tempting to drop runt here.

Axis blinks, huffing and glances away though accepts it and places it against his wound, refusing to look up at him as he used his other hand to grip onto the guy to make sure he wouldn't fall.

Aron felt the grip him. Damn couldn't drop him with out taking himself down to. Okay what ever just keep going. He kept moving. Faster now. Having clear sights of ledges on the alley way. It wouldn't be long till they got to his place. Then he could stitch up this kid and have him gone. Well perhaps depended on his mood and the other's willingness. Setting it aside for now. Not to keen on it now.

{{After your post here. We could continue at Aron's house.}}

((Alrighty :) You gonna post your next reply there then?))

Axis glances down. Fuck, they were getting pretty high now. His grip tightens before he mumbles,"Are we almost there yet, mutt?" Even if he knew his name, he was probably always going to call Aron a 'mutt'.

Assassins of the Void