"According to the guys at Fairfield Academy, there are two types of girls: the kind you hook up with, and the kind you're friends with. Seventeen-year-old Alyssa Reed is the second type. And she hates it. With just one year left to change her rank, she devises a plan to become the first type by homecoming, and she sets her sights on the perfect date—Justin Carter, Fairfield Academy’s biggest hottie and most notorious player.

With 57 days until the dance, Aly launches Operation Sex Appeal and sheds her tomboy image. The only thing left is for Justin actually to notice her. Enter best friend Brandon Taylor, the school’s second biggest hottie, and now Aly’s pretend boyfriend. With his help, elevating from “funny friend” to “tempting vixen” is only a matter of time.

But when everything goes according to plan, the inevitable “break up” leaves their friendship in shambles, and Aly and Brandon with feelings they can’t explain. And the fake couple discovers pretending can sometimes cost you the one thing you never expected to want. "

Hannah and I will be reading this! Feel free to join!


(view spoiler)[I can tell right now that this operation sex appeal is going to blow up in her face. It's sad that she's doing this for Justin. I could tell right away that Justin is a loser. It's really nice of Brandon to help her with this. (hide spoiler)]


(view spoiler)[Justin is going to probably turn out to be a jerk. Aly is clearly an idiot for doing all this. Hopefully Aly & Brandon will work everything out by the end. (hide spoiler)]


(view spoiler)[It was your typical YA read. Everything got crazy of course because we all knew Operation Sex Appeal was going to backfire. Aly finally got Justin but of course by then she was already too in love with Brandon. It was nice that her friend Gabi got with Carlos because it was obvious that they both really liked each other. (hide spoiler)]

I completely agree with you. (view spoiler)[ not only is it going to blow in her face, it'll likely derail her friendship with Brandon. Although, it seems quite obvious how this story is going to end. (hide spoiler)]

45% (view spoiler)[ that's me, right now, given how slow those two are to realize what's going on: 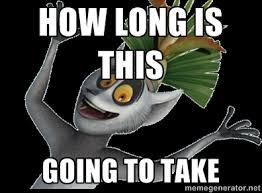 Tati wrote: "45% that's me, right now, given how slow those two are to realize what's going on:


I know. It was so obvious to everyone but them.

48% - (view spoiler)[ Why, oh why, must there always be a bathroom scene with girls/women tearing each other down? Such a cliche. (hide spoiler)]

Yes it is sadly. Which is why most people on my list gave it a 3 and nothing higher.