::Tribe Specific::
Tribe: Lightning Tribe
Rank: Leader
Apprentices: N/A
Powers: Storm prefers to keep all his powers a secret because he doesn't want to see too powerful.
Telekinesis Storm has the ability to move objects and on some occasions, cats and light wolves, with his mind. When he does this his body trembles, and the more he trembles the more effort it takes. Afterwards he gets very hungry.
Lightning Harness Being the leader of Lightning Tribe Storm has the ability to summon lightning in dire situations and make it strike wherever he wants. He can also use lighting to increase his own strength, agility, and powers. He has only ever used this power once.
Appearance Shift Similar to shape shifting, Storm has the ability to change body build and fur color to match that of someone else's. The only thing he is unable to change is breed and eye color. However, Storm finds this very amusing to use on certain occasions, but it is also very uncomfortable.

::Personality::
General: Storm is very laid back and observant. He would rather listen than talk. He never overacts and is very good at judging a situation then making the correct decision that is needed. However, sometimes he doesn't speak up and will allow things to happen without him ever acting on it. In some cases he feels like others need to learn from experience, but sometimes it can just get out of hand. He leads his tribe in a very conservative way, barely ever leading them into trouble.
Strengths: thinking, observing
Weaknesses: speaking up, acting
Fears: going into battle and not being prepared
Quirks: he is always very alert
Goals: keep his tribe safe
Belief: Light Tribe 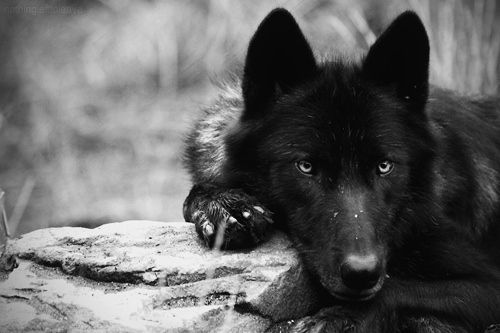 ::History::
Early Life: As a pup Storm was very happy. He played with his two siblings and other pups/kits his age. However, after two moons there was a bought of green cough in the clan. His whole family caught it, but him and his mother were the only two who survived. Even though it was near impossible the two moon old Storm made it past incredible odds as he would do many more times in his future life. That experience changed Storm. He started to think more and to watch things around him. He would still play and do everything a regular pup would do, but he was quieter.
Apprenticed: As an apprentice Storm was a very fast learned he was average, but still really good. His apprentice years flew by. At one point near the end of his apprenticeship a badger raided camp and was about to attack the apprentice den. Shockingly, very few of the apprentices and warriors woke up. The ones that did, including Storm, was able to drive out the badger, but not without landing Storm a scar on his cheek and the loss of a beloved friend (Who could've possibly been more than that too), Cherry.
Young Life: As a warrior Storm was just as laid back and chill as ever. He never found a mate though because Cherry was the only mate he ever wanted to have. He didn't let that stop him. He continued to go on with his life. About ten moons after Storm became a warrior a gang of rouges attacked the Tribe. Storm fought hard and helped his tribe a great deal in driving off the rouges. He earned a long scar on his hind leg. In the midst of the battle the current deputy was killed. The next day, early in the morning, Storm was named deputy in their place. Though Storm was still recovering from the injury on his leg he carried out his new deputy duties.
The Golden Years: As a leader Storm now knows a lot more than he would've ever imagined he would know. It has been a lot easier than Storm ever would've thought. He found he could solve problems with a simple negotiation that would cost his tribe hardly anything. He has been very fair and just. 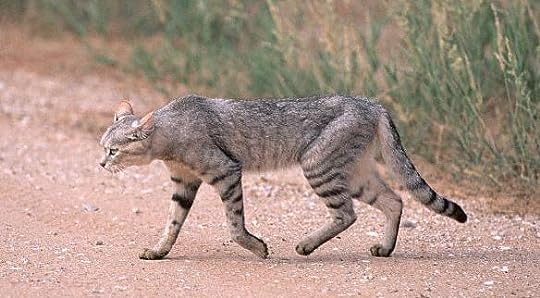 Personality: Sand is the slightly grumpy deputy of lightning tribe. Although his sour attitude isn't unbearable to deal with, it can get annoying when whatever you do is met with a underhanded or snide remark. Despite the bad attitude he still has his uses. His organization skills are great, allowing him to easily get patroles out of the way, and his stern attitude makes everyone know that their is no skipping out on duty. Bever the less he is a loyal members of the tribe, even if it seems like he hates everyone.

Powers: Sand can produce small spurts of electricity from his body. At the least the shock will just surprise you more than it actually hurts, at the most it will cause a cat a relativly large amount of pain.

History: For as long as he could speak, Sand has had a sharp tongue that has gotten him into trouble with others. The elders had a distaste for the lack of respect he showed them, the other kits never enjoyed how he spoke to them, and the elementals had grown tired of his smart remarks cycles ago. It seemed he was going to grow up a troubled cat, and was going to stay that way. The only ones whom had not given up on him were his parents as well as the leader of the tribe.

The leader had a plan that he felt would take out two birds with one stone. There was a particularly shy and timid elemental whom had taken these qualities into her maturity, and he felt that Sand was the perfect way to not make her unshy, but to at least help her learn how to better handle herself around the cats and wolves she usually avoided, because Sand's tongue was probably a lot more worse than any of the other tribe mates, and if she could handle Sand, she could handle them. As for his plan for Sand? He knew that having a teacher whom he didn't feel threatened by would probably shut him up and cause less fights between the two.

Once made an elemental Sand had started to simmer down some. He was still known to be rude and sarcastic to whomever spoke to him, but at least now he was willing to cooperate. He had started to make a name for himself for how well he could cooperate and still leave people hating him at the end of the day. As time went on Sand showed signs of becoming a great elemental. He came back with prey every time he went out, and was always willing to take an extra shift whenever it was needed. Eventually, after the sad death of the last deputy, Sand had taken over the spot as deputy. Where his keen mind and great organizational skills greatly helped the clan, but still allowed for everyone to hate his tongue.