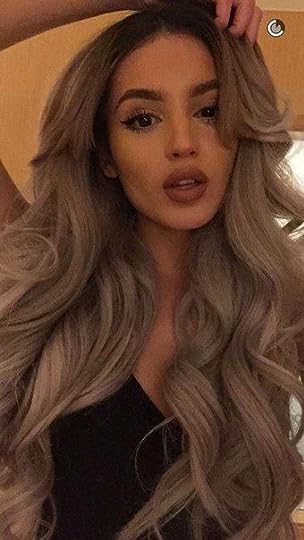 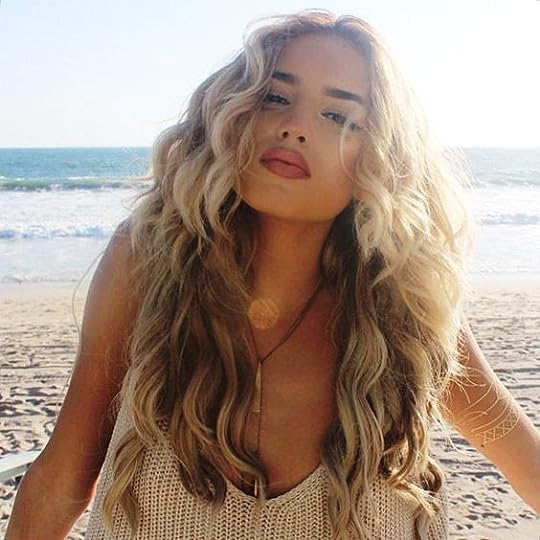 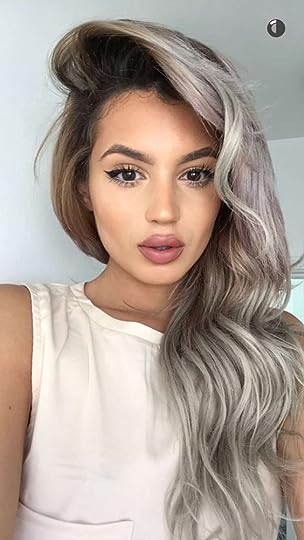 Valentina was definitely graced by the gods, when she was born. She was a beautiful baby girl, with silkiest hiar. Her hair however was different; she was naturally born with a black and silver-gray hair. She was the first in all of Argentina, to have hair such as this. For this reason the girl was called the wise one.

She has beautiful skin, that had a color that envied pure gold. She was given a beautiful sun kissed skin. She would never burn in the sun, as the sun would simply add a natural glow to her skin. Her parents had always made sure when she was young, that she would bathed in the baths with the most nuroshing oil and scents. Her lotions would be made by the best, never once irritating her sensitive skin.

As the girl grew older and her figure began to mature, never went unnoticed. She would perky round c cup breasts, along with a stomach that was toned and flat. Her bum was perfectly rounf and firm, but showed her very few of her stretch marks. She wasn’t ashamed of them, she was quite proud of the way they showed. Now, at the age of 16, she was blessed with her waist length hair, that she either keep up in ponytail or down. She wasn’t a big fan of curling so naturally she kept it wavy

Unlike her mother she was fairly short, around the height of 5’3. She couldn’t help but get annoyed at the height difference between others, but she hated to complain about it even more than necessary. She had a tattoo of her abuelas name and death date on her shoulder written in Arabic. She purposefully had it done, to be reminded never to give up even against her fathers wishes.

When she was growing up, her mother noticed how she would easily be friends with boys but yet very nervous with girls. She not only was afraid to be judged by them, she was always somewhat attracted to them. She was attracted to males too ofcourse, but she had always been free to decide. Her first kiss even had been with a young lady, which happened to be her best friend Deliliah. From the point on, she didnt really care about who she liked as long as they had resepect and good intentions. She kind of, how do you say it, she went with the flow. she wasnt the biggest fanatic about relationships in the first place. She had few simple crushes of either gender but never serious

Valentina has always been the to type to speak her mind, she never really did have a filter. Her mother had always taught her that it is always better to stand up for what is right. She is very witty with her words and sarcasm could definitely be her second language. She naturally has a personality that she gets along with anyone even if she doesn’t partially like them. She tries hard to be a peace maker, but sometimes her insecurities get the best of her. She easily compares herself to others, and it could make her a bit bitter and mean. None of the less she likes making people happy even if it makes her feel vulnerable.

On the beautiful day of august 5, our beautiful girl named Valentina had been born in the royal Cortez family. She was born in the nobility of the Cortez family as their fourth child, and youngest child. She was not even expected to live, since the queen had trouble during the pregnancy. None of the less she was the miracle child. She was born perfectly healthy with an abnormal color of hair, that was mixed with black and grey. She was given the title of the Wise Child.

When she was growing up she was never exactly fit in with her family. She was treated as a favorite of the four children, but still her siblings loved her. She was particulary close to the eldest brother Xaviar, he would secretly teach her the art of the sword. She would always enjoy the way her brothers and father would spare from time to time in the courtyard. She already knew her father wouldn’t let her learn, so her brother surprised her with the sharpest sword he bought from England. She not only enjoyed that but her sister Candence, had taught her how to play the harp. She enjoyed the sound, which her mother was very proud of.

Sadly enough, the queen had soon died of a sickness that could not be cured. On her death bed she asked her little girl to play a tune of joy on her harp. When her mother almost left, she gave her a beautiful sterling bird that played a beautiful sound. Her mother said to keep the bird very protected because it would her pet. That day her and her mother named it, Violetta. In return her mother asked her to play the harp in sync with birds singing. She never once went against her wishes, so she played until her last breathe was given. The same day she never once placed after, since the age of 11.

When thinking about the girl she would always stay in the town, greeting people making friends with ‘commoners’. She never did care for her royal name, she just wanted to be from the titles and be herself for once. Her father never liked the idea, but she didn’t really care what he thought of her. Her siblings even begun to scold how careless she was. She would spend her money on fixing orphanages and buying food for the commoners than clothes on her back. She miss many family evenings to eat, and spent her time with other families to make sure they were doing fine. Her father decided it was best to send her away for her studies, for her to not get disctated by others.

She protested the idea of leaving, but she was told not to return until she understood what it meant to be royal. She hated the role of titles, she wanted to be just valentina not a just some princess. She wouldn’t mind going without her dads constant nagging so see soon agreed to leave. She was going to take her school studies seriously and also meet new friends hopefully along the way. She wanted to make new friends, and start a new adventure.

Other:
∞ she has a pet sterling named violetta
∞ she suffers from dyslexia
∞ she is actually a horrible cook
∞ she is very clumsy

Heartfield Academy for Royals,Nobles and Servants