Kindle Countdown Deal - Only $0.99 for a limited time. 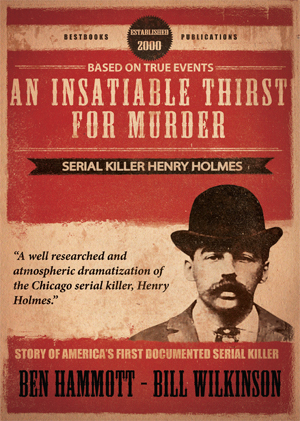 This book contains the shocking dramatization of real events carried out by the serial killer, Henry Howard Holmes.

America's first documented serial killer, Henry Howard Holmes, holds a dubious and ghastly record that few serial killers in history have surpassed. The 19th century killer is thought to have committed over 200 murders, but, for unexplained reasons, appears to have been overlooked by many true crime enthusiasts. Set partly in the era when "Jack the Ripper" was terrorizing the foggy streets of London with his gruesome slayings in the 19th century, Holmes was committing his nefarious crimes in America, undetected.

Kindle Countdown Deal - Only $0.99 for a limited time.

Please leave a review on Amazon & Goodreads if you enjoyed the book.

Mod
Thanks for sharing:-)