Muse A is a man who has been single for a very long time and hasn't been able to frick frack ever since he was in High School. Muse B is a man who isn't single, has a family, has a wife, and has kids, he's been able to frick frack for a long time. Muse B has just been fired from his job and is in dire need of a new one, living in Bandera, Texas ; you can find just about any type of job. Muse A is in need of another partner, he's a cattle rancher and sheep herder, and well again in need of a partner, he puts out an ad and Muse B is the first to accept it. Now set in modern times, it's still illegal to be gay, but when Muse B first lays eyes on Muse A, it's love at first sight and he stops at nothing but to flirt with Muse A, Muse A doesn't think anything of it and flirts with Muse B. As they lead the cattle and sheep to the top of a small mountain in Bandera, they start to become friends and even more when Muse B starts to cuddle with Muse A in their tent, when Muse A wants more, Muse B is more then happy to oblige. When the weekend ends and Muse B must go back home, he is saddened to leave Muse A and promises him that in a year he'll come back to him. Muse A trusts Muse B.....blah blah blah, a year later.....Muse B keeps his promise and comes back, but he finds out Muse A is married and has a child, he then leaves and never returns, until Muse A sends a postcard, apologizing. Muse B sends an postcard telling Muse A to come visit, Muse A does and when he gets there, Muse B is forced to tell his wife how he feels about the man on his doorstep, his wife isn't happy but doesnt tell him she'll leave, instead she welcomes Muse A in and the two become friends as he screws around with her husband. Muse A's wife finds out about this when Muse B's wife calls her, she isn't happy about it either, but she could care quite less as long as her husband is happy. After a while though, the wives aren't happy and they leave, the kids are in their custody, and well when the town finds out, Muse A and B are surprised that they support them, when asked why, the people just smile and say, " Love is love, and Cowboys can love whoever they please,". Blah blah blah blah we can continue from there and whatnot.

Shall we make characters now?

Yes, I think we shall

Alright, me or you first? 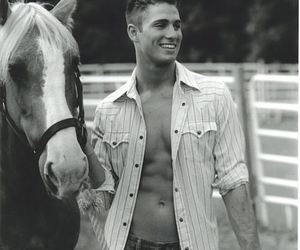 Sexuality: Homosexual
Crush: No one...soon your character...then a woman ( not really )
Family:
Jocelyn Rast ~ Mother
David Rast ~ Father
Brendan Rast ~ Brother
History of the last name Cassidy: Cameron hated his last name was younger and when he started school, he asked his mother to put the last name Cassidy as his last name, so everyone began calling him Cameron Cassidy.
(view spoiler)[Amy Cassidy ~ Wife in the middle of the Roleplay
Josh Cassidy ~ son in the middle of the Roleplay (hide spoiler)]
Other: Cattle Rancher

Where should we start? When they're already on the trip?

Yes, I think so

Cameron looked around as his horse stood on the top of a small hill, he smiled softly and looked behind him at John, " It's a beautiful sight ain't it?" Cameron said.

John grinned and nodded to Cameron. "It sure is. Beautiful sight. Ain't gonna get this sight out in the city." he said.

" Nope, well sun is setting, better set up camp for the night," Cameron said as he watched the sun for a moment before turning around.

John nodded. He removed his hat and ran a hand through his hair. He turned around to help set up camp.

Cameron unmounted his horse and grabbed the tent, he began to set it up.

John grabbed the tent and firewood. "Do you want me to start the fire, Cam?" He asked him.

" Yes if you can please," Cameron replied as he focused on the tent.

John nodded and began rubbing stick together. He grabbed a handful of leaves when no smoke was starting.

Cameron finished putting the tent up, he reached into his pocket for his matches and turned around to John, he smirked and comes over he bent down beside John, " Try using a match," Cameron suggested.

John's face fell when he saw Cameron had matches. "Wish you would've said hat earlier," he muttered. He took the match from him, smiling.

"Yeah right." He said, smirking at him. He dragged the match along his boot. Flames ignited and he placed it on the pile of dry leaves and tree branches.

Cameron smiled, he looked up at the sky, " I'm gonna start laying down," Cameron said.

" No not really," Cameron said and ducked into the tent, he laid down and closed his eyes.

"Alrighty then." John said. He fed the fire some more before grabbin' his small bag of Beef Jerky.

Cameron sighed, facing one of the walls of the tent.

(( when should they start the cuddling stuff? ))

Cameron's eyes were opened, he was still very tired.

John had just finished adding more firewood to the fire. He went in his tent and laid down.

Jordan ran a hand down his back, hoping to bring some kind of comfort.

Cameron sighed in content, " I think your the only friend I have ever had," Cameron said, but he shifted and moved a little closer to John.

"Really?" John asked him. He noticed Cameron moved closer, but he didn't say anything. "Why do you say that?"

" Because no one else is nice to me," Cameron said.

John nodded at Cameron. "I understand, Cam. And I'll always be nice to you."

Cameron nodded, " I know," Cameron said, he turned around to look at John.

Cameron smiled, he then bit his lip, " This may seem weird, but I can never go to sleep without cuddling with someone," Cameron said, he awkwardly smiles at John,

John laughed. "Really? Well I wouldn't mind being your cuddle buddy." He smiled.

John laughed. "Really. What's so surprising about that?"

Cameron shrugs, " Everything is surprising about it," Cameron said, he then smiled turned around and looked at the wall of the tent.

"What do you mean?" John asked him gently.

" Well..I don't know how to explain it really," Cameron murmured, he slowly takes one of Johns arms and wraps it around his torso, his lip bleeding from biting on it too hard. Cameron hoped John didn't feel weird about this, they were strangers to each other for god sakes.

"Tell me." John insisted. He ran his finger along Cameron's lip. "You should really stop biting your lip." He murmured.

" It's surprising because, well....no other man does this for me, and it's sort of new to me feeling another mans arms around me," Cameron replied as he turns around again to face John.