Hello, everyone! I'm Kate M. Colby, and I'm here to help Angela celebrate the release of Fire and Lies (Tales of the Drui Book #2) , plus introduce you to my steampunk fantasy novel The Cogsmith's Daughter (Desertera #1) . 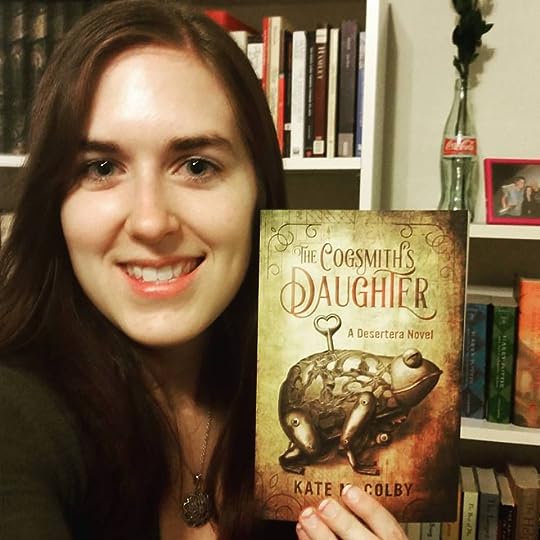 Pardon the blurriness! This photo is from the day I received my first print copy of The Cogsmith's Daughter (Desertera #1) , and my hands wouldn't stop shaking!

Read on for your chance to win a FREE signed paperback copy. 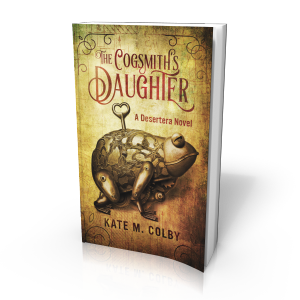 In a desert wasteland, one king rules with absolute power and unquenchable lust, until the cogsmith’s daughter risks everything for vengeance.

Two-hundred years ago, the steam-powered world experienced an apocalyptic flood. When the waters dried up, the survivors settled around their moored steamship in a wasteland they named Desertera. Believing the flood and drought were caused by a scorned goddess, the monarchs demanded execution for anyone who commits the unforgivable sin—adultery.

Today, King Archon entraps his wives in the crime of adultery, executing each boring bride to pursue his next infatuation. Most nobles overlook King Archon’s behavior, but when Lord Varick’s daughter falls victim to the king’s schemes, he vows revenge.

When Aya Cogsmith was a young girl, King Archon had her father executed for treason. Orphaned and forced to turn to prostitution for survival, Aya dreams of avenging her father’s death. When Lord Varick approaches Aya with plans for vengeance, she agrees to play the king’s seductress—even though it puts her at risk for execution.

Packed with high-society intrigue, dappled with seduction, and driven by revenge, The Cogsmith’s Daughter is a steampunk fantasy novel with the perfect mixture of conspiracy and romance.

One woman’s quest for revenge, held in a steampunk world ruled by theocracy and thirsting for truth (and water).

Where can I get my copy of The Cogsmith's Daughter (Desertera #1)?
Just click on the retailer names below! 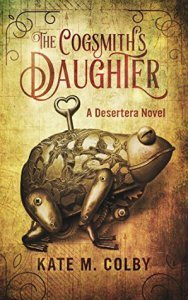 In celebration of Angela’s release The Cogsmith's Daughter (Desertera #1) is FREE on Smashwords TODAY ONLY! Just use coupon code SFREE at checkout.

Or, stay right here for your chance to win a SIGNED paperback at the end of the hour!

One of my goals with The Cogsmith’s Daughter (Desertera #1) was to create a female protagonist (and supporting characters) who is complex and flawed. Aya is loyal, determined, and learns to be brave. But she is also stubborn, blinded by her ambition, and insecure about her sexuality (which is quite a bad trait in a courtesan!). 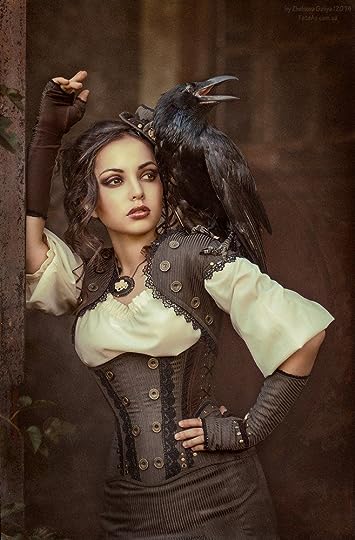 While Aya is the star of The Cogsmith’s Daughter (Desertera #1) , I didn’t want the Desertera series to be ALL about her. Enter: Miss Dellwyn Rutt. 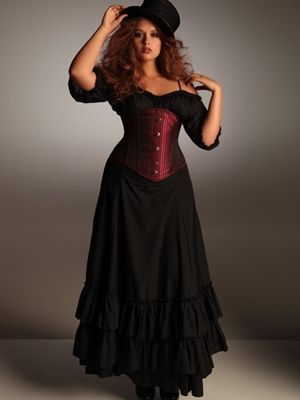 Dellwyn is Aya’s best friend at the Rudder (the brothel), and unlike Aya, Dellwyn loves being a courtesan. She thrives in intimate situations, is incredibly confident in her sexuality, and adores the attention of her clientele. She’s also fiercely independent, a true mothering spirit, and has one heck of a quick wit.

Dellwyn’s flaws? She fears (and avoids) commitment, undervalues her own self-worth, and has a bad habit of sticking her nose where it doesn’t belong.

In The Cogsmith’s Daughter, Dellwyn acts as Aya’s support system, shoulder to cry on, and occasional comic relief. But in Desertera #2 (coming this September!), Dellwyn is our leading lady, and we’ll get to dive deep into her life at the Rudder. Follow my Goodreads author profile -- Kate M. Colby -- for updates.

Don’t let me have all the fun!

When I’m not researching the anatomy of late-19th century steamships (seen in The Cogsmith’s Daughter (Desertera #1) as the palace), plotting twisted revenge schemes, or designing the corset-packed wardrobes of my protagonists, I also write nonfiction for writers.

If you’ve been scouring Goodreads and thinking “Man, I want to write a fantasy novel!,” I’m here to tell you that you can.

A great second step? Download your FREE copy on Amazon (until July 4). 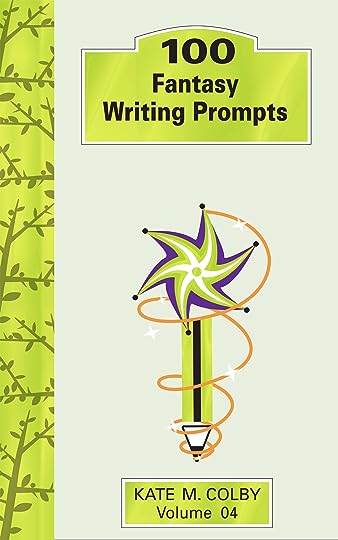 A few other writing tips:

1. Write first. Edit later. If you edit while you write, you might get too obsessed with perfection and never finish.

2. Break any rules of reality you want. NEVER break the rules of the fantasy world you create.

3. Give your protagonist flaws, and give your villain redeeming traits. No character should be pancake-flat.

Fantasy not your thing? No worries. I’ve got booklets published (or in progress) for several genres. Check out my Goodreads author profile for yours.

Loved Aya so much!! I'm so excited for the second book to find out how her shop is going. Hopefully she will stop by in a couple of pages.

Sara wrote: "Loved Aya so much!! I'm so excited for the second book to find out how her shop is going. Hopefully she will stop by in a couple of pages."

Don't worry! Aya makes quite a few appearances, and you'll get a peek inside her shop too. :-)

Thanks for stopping by! Now, what you’ve probably been scrolling to find…

For your chance to win a FREE signed paperback of The Cogsmith’s Daughter (Desertera #1) , simply answer this question:

What is one strength of Aya Cogsmith, the novel’s protagonist?

Anyone who answers correctly by the end of the Fire and Lies Release Party (July 2, 11:59 p.m. EST) will be entered to win. From the those who answer correctly, the winner will be chosen by a random number generator and notified via Goodreads direct message.

Before I go, I’d like to say a quick thank you to Angela B. Chrysler for letting me share in her book launch. I hope it’s a smashing success and wish you all the best, Angela!

Hum... She is the daughter of the cogsmith so I will say her ability to fix and work with mechanical objects like clocks, her frog.. Right?

Hum... She is the daughter of the cogsmith so I will say her ability to fix and work with mechanical objects like clocks, her frog.. Right?"

Absolutely! And the more she learns about her craft, the better she gets!

Sorry I wasn't able to come by when you were live, but I've got my copy of book 1 just waiting for its turn in my reading queue!

Samantha wrote: "Sorry I wasn't able to come by when you were live, but I've got my copy of book 1 just waiting for its turn in my reading queue!"

No worries. I'm excited to hear your thoughts!