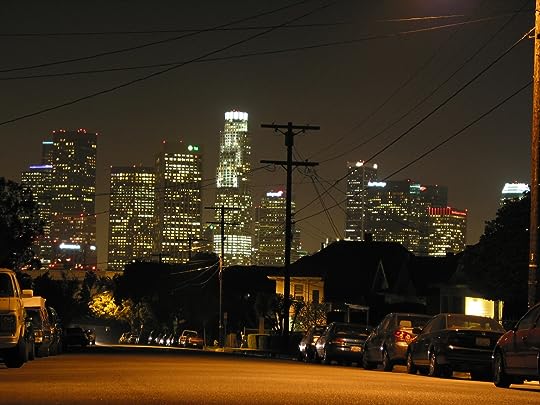 Bedford Avenue is more commonly known as the slums of Downtown. Other than the run down apartment blocks, this is the most populated area in Downtown. Those who reside here are treated with a lovely view of a part of Uptown. But, that only fuels jealousy.

Jasper cursed his luck. All he had wanted was a damn shirt. Now he got tangled up in this kind of drama. He checked his watch. He still had three hours left before his house was apparently going to be destroyed. He had spent the first hour panicking, and then the next hour debating whether or not he should do it. It wasn't like that vampire really knew him. However a guy with that many connections could quickly find out.

Jasper wasn't about to sell out one of his packmates. His house didn't mean that damn much to him. But he certainly felt it wise to let said packmate know that someone had hired him for a bounty on their head.

He just needed to figure out which packmate... and he had a good idea who it was. Looking around, he finally spotted her walking back from God knows where.

But once he was in front of her, his mouth went dry as it always did when talking to people. How the hell was he supposed to word this? Gathering his strength he said, "Uh... Jo... uh... hi. D-did you um, happen to see uh... any vampires today?"

Joanna had been walking back home from Uptown. The stark contrast of Downtown's neighborhoods was something to marvel at. Hell, it even smelled of shit as compared to Uptown. But, this was home, either way.

Then a familiar smell peaked her interest. She turned to see Jasper approaching her. A friendly smile appeared on her lips as he slowly greeted her. "Hey, Jasper." She said as she waited for him to continue. And his question certainly was an odd one.

"Sure. I saw one that we go to school with today." She said talking about Felix, who she spent time with earlier. "And before daybreak I saw a rich asshat that barely passed for a vampire." She said with a small snort as she remembered the one at the bowling alley.

Jasper's eyes widened at her saying that. Bingo. "Well... um... rich asshat there, um... is out for your head over in the well... um, mall." He slowly and agonizingly made his way through the story and by the end of it, he said, "What are you uh, going to um do? You certainly don't have to um go... you know I don't care all that much about my house or folks... but I don't want you to um, get hurt."

Lowering his voice, he found himself saying, "I am scared a bit, Jo... I don't think he is uh... someone you should mess around with."

He wished more than ever that he was a wolf and he could just sink his teeth into the damn vampires neck... but he was plain ol Jasper for now and didn't have such powers anymore.

Joanna's eyebrows raised when Jasper explained that this vampire was out for her head. She couldn't help but to actually laugh as well. It seemed like someone actually had a stick up his ass. And that.. Well, that was richer than he was.

But, then Jasper explained the rest of the story. Joanna's face dropped when he said that Jasper had been threatened. Anger was clear on her face, but it had softened when he told her he didn't want her getting hurt. "Don't worry, Jasper. I won't." She promised him with a smile reappearing on her face.

Joanna let out a breath as she placed a hand on Jasper's shoulder. "It's okay. I'll go see what this guy's problem is and get it settled." She said with a warm smile before she turned back around to head back into Uptown.

Jasper was surprised to hear her laugh. He would've been scared out of his mind if he heard news like this. He guess that was the difference between Jo and him. He couldn't help but feel a glean of admiration towards the girl.

He didn't know how she could guarantee that, but he nodded in support. Joanna was a pretty tough girl.

As she walked away, he debated with himself for a while, before deciding to quickly follow her.