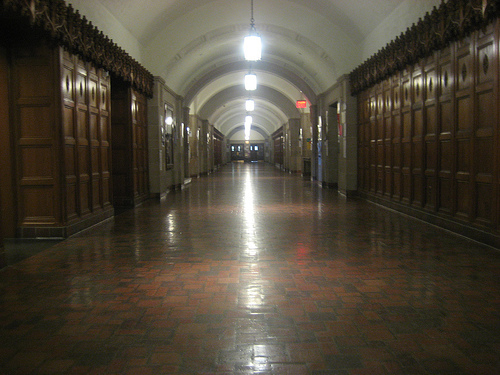 The hallways in St, Clark's Preparatory School are certainly something to marvel at and not so congested in between classes, as compared to other schools.

Maddox had been staying late in the school to make up a test he had missed a few days ago. It was one of the days his hunger had make him quite ravenous, so he opted out of the whole 'school thing'. It was the safer option for everyone considering he was still technically considered a 'newborn' vampire and so he had much less control over himself than older vampires.

He had sauntered out to his locker to put his things up. Once he shut the lock he turned and saw Evie at her own locker. He knew the girl, but not too well. She was in his AP Literature class. From this view he couldn't help but to wonder why he had never actually hit on her before.

"Hey, Evie!" He called as he approached her. But, annoyance came over his face once he got no answer. He leaned against the locker next to her own and reached out to pluck a headphone out of her ear. Maddox gave a heavy sigh. "You know.. It's so rude to to ignore someone who is trying to be friendly." He said as a smirk came over his lips. He couldn't help but to take in Evie's sent as he stood inches from her. Humans usually smelt fantastic to vampires, and Evie smelt oh-so-sweet.

Maddox's smirk didn't waiver when she insisted he was being rude. "Well, I suppose we are even then." He practically purred as he spoke, clearly smug as they came. "Two wrongs can make a right then." He mused as his multicolored eyes held Evie's blue eyes.

"Yes. Unfortunately I can be a busy man." He gave her an excuse for making up another test. "Not all of us can waste time being a good girl and decorating for some school event." He quickly returned the banter, making a small dig at Evie since she had brought up the fact he had to make up another test.

But, Maddox waved his hand in the air as if there was smoke in between them. "Now, I didn't come here to act the part of an old couple with you." He suggested as he tried to move past their previous conversation. "I don't know much about you. Aside from the fact that you are a good kid. Well, and you are smart.. I'll give you that. You manage to give me a run for my money in our literature class." He went on about Evie, even raising his eyebrows suggesting he was impressed about her grades. "What do you when you are not wasting all your time here?" He asked in a tone that was probably too suave for his own good.

Maddox couldn't help but to grin when Evie blushed. He swore he could feel her blood gather behind her blush. That made him roll his shoulders to get his attention off of it.

He blinked as she spoke. Wow.. This girl was boring. She really was a good kid. She did nothing exciting. Maddox could potentially fix that..

"Let me take you out sometime. Yeah?" He plainly asked her with a smirk. "We can go to dinner or out to a club scene. Whatever strikes your fancy." He told her with a quirked an eyebrow.

(Sorry that this is so short!)

"Maybe?" Maddox repeated with a laugh, clearly he didn't believe her 'hard to get' facade. Then she started to walk away he just sighed, following after her. But, he took his time to watch her hips swing, not even bothering to hide it if she looked back at him.

"No. Not often actually." He admitted as he crossed his arms behind his head as they walked together. "Business takes up a lot of time. But.. Yeah, I do occasionally spend time at the club scene. He said with a shrug as if it was no big deal.

Maddox just really liked the feel of it. He loather it before he was a vampire. He had to be drunk to enjoy himself there. But, now? He loved the heavy bass of the music that he could feel from his senses and the sound of the heartbeats around him. It was almost like a drug.

"Why? Does it change your view of me at all?"