Mod
I'm saying that "Skin Lane" by Neil Bartlett, which, at the time of writing, I am about 40% through, is Hamilton-esque in its evocation of dear old London.

"Skin Lane" captures vividly the atmosphere of the changing London of the 60s, and Neil Bartlett's descriptions of the City itself - the churches, the markets, the dark alleyways - feel very accurate.

The central character is a single man in his mid-40s who is known to everyone as Mr F. He has been called that by his fellow workers at M Scheiner Ltd, a firm of manufacturing furriers based in Skin Lane in the City of London, for 20 of the 33 years he has worked there. Only his boss, Maurice Scheiner, and Mrs Kesselman, the formidable woman in charge of the machine room, seem to recall that his name is Freeman. Mr F lives by himself in a one-bedroom flat in a Victorian mansion block in Peckham. He wears a double-breasted suit of brown worsted; the cuffs of his white shirt are always immaculate. He washes his hands with carbolic soap before rubbing lanolin into them. He has a reason for this daily ritual, which Bartlett reveals quite early in the constantly surprising narrative.

"Skin Lane" is set, for the most part, in 1967, the year in which the recommendations of the Wolfenden Committee regarding homosexual acts between "consenting adults in private" finally became law. Mr F remains indifferent to this monumental change, even though he has read about it rather cursorily in the Evening Standard he buys at London Bridge station on his way home. Mr F is that rarest of beings, a complete sexual innocent, who has never experienced any stirrings of desire. His job as a furrier is his life, and beyond the immediate task of skinning the various pelts that land on his work table, he has no curiosity where the rest of the world is concerned. He doesn't read books and the only music he listens to on his ancient radio is of the light variety. Cinemas and theatres tend to be crowded, so he can't be bothered to catch up with the latest films or plays. On Sunday afternoons he occasionally visits the National Gallery or a museum. He enjoys looking at stuffed animals and birds in glass cases, which isn't odd given his occupation. He is dull, but it is Bartlett's achievement to make his very dullness interesting.

"Skin Lane" is getting increasingly sinister and tense, so if that is to your taste, along with a great evocation of London, then (so far, at any rate), I'd say get your mitts on "Skin Lane". 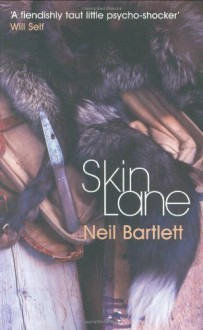 I nicked quite a bit of what I wrote above about the book from this review in the Guardian (I'll pen my own review once I finish it and post it here)...

This is from the GoodReads book description...

Shortlisted for the 2007 Costa Novel Award

“I read "Skin Lane" with one eye closed out of sheer animal terror. Then, unimaginably, it brought me to tears; what a work of art—so unexpected and heartbreaking and lovely.”—Armistead Maupin

“A powerful and complex story of sexual obsession. . . . A profoundly original meditation on thwarted desire.”—Patrick McGrath

“"Skin Lane" welds itself to your hands from first to last. Textured, teeming with menace and deeply moving, it is an extremely fine piece of writing.”—The Times (London)

“A fiendishly taut little psycho-shocker.”—Will Self

At forty-seven, Mr. F’s working life on London’s "Skin Lane" is one governed by calm, precision, and routine. So when he starts to have recurring nightmares, he does his best to ignore them. The images that appear in his dreams are disturbing—Mr. F can’t think of where they have come from. After all, he’s an ordinary middle-aged man.

As London’s backstreets begin to swelter in the long, hot summer of 1967, Mr. F’s nightmares become an obsession. A chance encounter adds a face to the body that nightly haunts him, and the torments of his restless nights lead him—and the reader—deeper into a terrifying labyrinth of rage, desire, and shame.

Neil Bartlett is an award-winning English novelist and theater director. He has directed on numerous occasions for the Royal Shakespeare Company.

Mod
Finished! I recommend to all fellow Hamiltonians. And can confirm it is indeed Hamilton-esque. London is the star of this book, and the descriptions of the city are superb. The characterisations are also brilliant. Very good indeed.