Mod
I swear we had a GoT thread, but I can't find it! So here we go.

Please note that this is a place to discuss any and all episodes of Game of Thrones, so it might be an idea to avoid it if you haven't caught up.

THAT WAS SO EPIC!

Mod
i need to catch up. I believe the wife and I have season four and five to catch up on. cant quite remember though, would have to check. We just finished vikings so hopefully we can get back into GoT in the near future.

Mod
I'm about four episodes behind you Rinn. Still too annoyed at lack of book to get stuck in.

Mod
I'm caught up Rinn! I think I like this season the most, strictly because I do NOT know what it going to happen.

Last night was good, but Hold the Door took something from me. 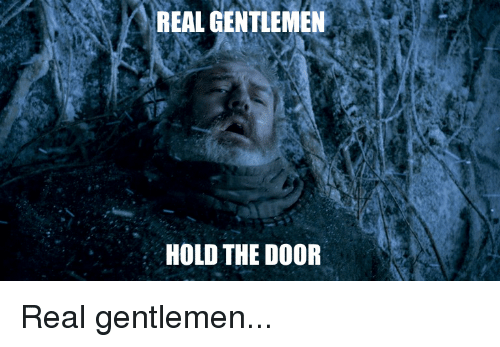 I just got caught up too! I agree with you Hybrid, I feel like I'm enjoying this season the most. Early on, I was nitpicking all of the things they changed from the books and trying to decide if I liked their version or not. Now I'm just watching to see if my predictions come true.

This week's episode was a great example of being just enjoyable. I wasn't terribly surprised by much of what happened (unlike Hodor - did not see that coming), but it was incredibly well done. The battle scene was the best yet, I think. It looked like there were only about a dozen guys fighting in the Battle of the Blackwater, but this was much more convincing. Yay Jon Snow!

Yeah I was surprised by Hodor - or rather, would have been, had people not posted what is essentially a spoiler without being one (e.g. posting a picture of a character and a sad emoji).

I knew Rickon was going to die, but when it happen I still gasped - it was so brutal. And they showed him getting struck like 3 or 4 times! That battle was so intense though. I literally have not physically reacted to an episode so much - gasping and cheering and screaming (and crying with joy for Sansa omg).

Mod
My favorite new memes are just pictures of Sansa with the caption "Who let the dogs out?"

I just watched this episode and holy sh*t!! I think all my dreams just came true... Still in fan girl mode... Cannot discuss on a detailed level right now..

Soooo how about that finale? I had wondered if it wouldn't be too exciting, because episode 9 is usually the big one. I was clearly, and happily (I think?!?), quite mistaken!

Mod
I don't even have words to explain that last episode, but my husband was punched in the arm at least half a dozen times. There may have been some shrieking too.

The music throughout that whole episode was SO different to normal and so so perfect.

I loved all the changes and the build up of tension. Cersei really went for it... and Tommen, oh my god I was just sat there with my mouth hanging open!

Now Sansa is going to have to deal with Littlefinger, the creep. And does this confirm L+R=J??

As soon as Tommen put down his crown, I knew what he was going to do. Now, I am somewhat conflicted. Is this really what Cersei wanted all along? I know they go on and on about how much she loves her children but then she broke her son anyway. And now is Jamie going to have to put her down Mad King style?

I have to say that I think this was my favorite season yet. It may be mostly due to not knowing what was going to happen but I also feel like they really upped their game on the story.

Is Jon going to hook up with his cousin Sansa or his aunt Daenerys? Either way, shit is definitely coming to a head.

Mod
Well, there is the prophecy from Maggy the Frog about Cersei...

- She would be married to a king, not a prince (Robert)
- She would have 3 children whilst her husband would have 16 (Tommen, Joffrey, Myrcella, plus Robert's many bastards)
- Her children would all die before her (which has now happened)
- And she would die at the hands of the 'valonqur', High Valyrian for 'little brother' - so Tyrion or Jaime, but I want to say Jaime because that look he gave her at the end...

The Tommen scene was so well done. I spontaneously predicted before we turned it on that it might be the episode they killed him off, just on a hunch, but I would not have guessed just how!

I know I've read stuff on Martin denying L + R = J, but I'm not sure if he's just trying to be tricksy, or if the books will do it differently...? Assuming the books ever exist! I hope Jon isn't involved in any incestuous relationships...

Where's Ghost been hiding recently?! I miss the direwolf emphasis.

Mod
I want to re-read the books so bad, but I have new book guilt. Ughh.

Mod
I've been wondering the same about Ghost. Although at the rate they've been killing off dire wolves, maybe Ghost should just hang out somewhere safe.

Mod
Hmm, I was reading Tor's predictions and they are pretty sure Ghost will be killed off soon.

Mod
Why you do this to me Rinn?!

*Sobs and runs away*

Ive also heard that there are only 13 more episodes according to the writers and that season 7 will be seven episodes and season 8 only six episodes.

As far as R and L = J that part didn't surprise me as it has been heavily hinted at,

It seems to be hinting that Jon and Danaerys will hook up, but I think there could be a possibilty of a D and Jaime, or even a D and Tyrion as they seem to be growing very close.

Now it is just the wait until April 2017 for new episodes, or an indefinite wait for the books. This season would pretty much take the show past Winds of winter which hasn't even been written yet so the show will end far before the books. It has been great seeing a Fantasy show so well recepted and hopefully it paves the way for more in the future. There are so many series out their that could be great as movies or tv shows.q

p.s. as much as I enjoyed the books/show I still think ASOIAF is overrated.

Mod
Hmm, by that theory... what about Stannis? :P

Mod
I thought that the episode after he died it showed Brianne more concretely killing him with blood coming up. Lol again it's just a theory.

Mod
I'm also on board that Jaime will kill Cersei. She is indirectly (almost directly) responsible for all her children's deaths through her coniving. Even if she doesn't I dont think there is anyway the Lannister army could withstand the army of the North, Dorne and Tyrelle's, Grey joys, Dothraki, Unsullied, three Dragons, not to mention the White Walker's. So hope she enjoys being Queen for the very short time that she will get to.

Mod
I have to point out that, yes some "dead" characters come back but they are nothing in comparison to the number who are actually dead.

Also, I read a very interesting theory that Lyanna whispers a name other than Jon Snow to Ned. Which, is totally plausible since when it happened I thought it was way too many syllables.

Mod
Not saying that I don't want Hodor to come back lol.

Mod
Maybe she whispered "name him the hound" :p

I think she said she got married to Rhaegar at the registry office.

Mod
I can tell you the theory of what she said if you want, but I'll only mention it with permission.

Mod
I already know so I'm happy for you to go ahead. This is a spoiler thread after all ;)

Mod
I've read what I think will be the same theory. That Sam Tarly travelled back in time to impregnate Lyanna Stark and is actually John Snow's father

Mod
But then you'd think that Jon would know a little more than nothing :P

Mod
That is creepy Lancer lol.

Ok, I started explaining the theory and was butchering it, so here's a link lol:

Mod
I also would like to know, who has the time to sit around and ponder all these theories so thoroughly?? I've been into the series for a long ass time and have had plenty of my own theories, but this, this took a lot of Westeros history research to pint point all the clues.