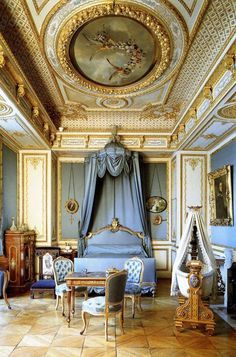 With a balcony overlooking the gardens.

Arianette allowed Anastasia to lead her to her chambers. Her vision was still blurred ever so slightly by tears, but she couldn't seem to muster any more. Everything felt so cold. She felt detached from it all like she was watching everything unfold from afar. Her last moments with Nathaniel kept replaying in her mind.

Anastasia opened her door and gently helped Arianette inside the room and gently set her down on the couch by the window. She then rang a bell and asked her maid to bring them some tea. She then sat down beside Arianette and put a comforting hand on her shoulder. "What did Caspian do?" She asked softly before realizing that was too intrusive. "Sorry, I shouldn't have asked. You don't have to tell me if you don't want to."

Arianette snapped out of things once she heard Anastasia speaking to her. "No, it's fine," She said, "It's only natural to be curious." She sighed, unsure of what to tell Anastasia. Was there any benefit to hiding the truth? "Everything that's happened to me is my fault," Arianette said, "I fell in love with Prince Nathaniel despite it being against the rules. I should be grateful that the only thing Caspian did was send him away. I fear that the only reason he's allowed me to live is that I'm pregnant with his child."

Anastasia's eyes widened a bit. It was a lot to take in... but it also meant that Court would likely end soon because Caspian would marry Arianette. Anastasia couldn't help but be furious. Not because she wouldn't win Caspian's heart, but because of what he did. "He knows you two are in love and he didn't let you leave with him?!" She gasped, clenching her fists. She didn't care who he was, Anastasia planned to have a little chat with the Prince. She then frowned and her eyes softened and she hugged Arianette. "I'm so so sorry.... if there's anything I can do to help, anything at all, please tell me." She said softly.

Arianette's eyes widened as Anastasia hugged her, unsure of what to do for a moment, before settling on returning the girl's hug. "Thank you," She said, "Although things aren't as simple as just being in love with someone. Caspian made the choice that he thought was best, and even if I don't agree, I'll have to stand by him." Now she had to pay for her mistakes. Fate was playing a cruel joke on her, punishing her for reaching too far out of her station. She had wanted this when she first decided to come to this place. Now that she had it, she wasn't sure if it was what she wanted. "You're so naive," She said with a smirk, "I always thought that was a bad thing, but perhaps it isn't as bad as I originally thought."

Anastasia chuckled a bit and smiled. "I'm not as Naive as I appear, it's just easier to pretend to be. Makes things hurt less. Though, I don't pretend to be as strong as you. I'm strong but in different ways." She told her and smiled softly. "Maybe I can speak with Caspian and see about this. I know he likely won't listen but I can at least try. If he knows it's not a secret, he might do something in order to save his reputation."

"Cynical is probably a better word to describe me, but thanks," Arianette said, trying to conceal a small smile that had formed on her lips. "This is him saving his reputation," Arianette replied, "He would look a fool if he let me run off with his child. While I appreciate your help, this is my problem, not yours. I don't want to drag you into this."

Anastasia sighed softly. "It's not dragging me in if I jump in willingly. What es doing is wrong and, prince or not, someone has to stand up to him and tell him that." She said firmly but still smiling softly at Arianette.

"I don't get the sense that I can dissuade you from helping," Arianette said with a sigh, "Don't say that I didn't warn you, though." Anastasia claimed that she wasn't as naive as Arianette believed, but believing that somehow two women could just stand up to the Crown Prince of France and make demands seemed awfully foolish to her. "And just how exactly are you planning on telling Caspian that he's wrong?" Arianette inquired, wondering if she had some sort of plan.

Anastasia bit her lip. "Did Nathaniel give you any letter or anything? For when you two escaped claiming the child was his? That certain care should be given to you and the child in England?" She asked.

"No, I don't believe he ever did," Arianette replied, although she wished that she had thought of that earlier. Besides, she wasn't even sure if a letter would be enough. She wouldn't be surprised if Caspian increased the number of people that he had watching her. A letter like that would only be useful if she managed to make it to England.

Anastasia frowned a bit. "I thought I saw him carrying a scroll before.... maybe he left it in your room or his. I know I saw something.... if he wrote a letter, and we can find it and get it to England, the British family will demand your safe passage to England. Married or not, you would still be carrying the possible heir of England. Caspian wouldn't have a choice but to allow you to leave unless he would risk a war with one of his most powerful allies."

"And therein lies my greatest fear," Arianette replied, "The last thing that I would want would be a war caused by my actions. If this letter is real, though, I should like to have it in my possession. I can't do something as foolish as just revealing the information. If I did it anywhere in French court, the letter would immediantly be destroyed. It will take much more than that." She wasn't sure of how she would execute her plan without executing herself in the process. "I can't go looking for the letter if he left it in his chambers," She said, "It would be too suspicious. I can search my chambers without much trouble. If you truly wish to aid me, could you search his chambers for this letter than you speak of?"

Anastasia's eyes widened a bit. She wasn't sure how it would be any less suspicious if she did it, but she nodded anyone. "Of course. I'll make up some story about him leaving something behind if I'm caught. And how he invited me to his court back home to return it." She assured her. "Don't worry, I'll make sure you get to England and get the happiness you and Nathaniel deserve." She said with a small, reassuring smile.

"Please, don't do anything with the letter if you find it," Arianette replied, "I need to see it first. And as for getting caught, there shouldn't be many people, if any at all, guarding an unoccupied room. I suspect that after today there won't be many times when we'll be able to meet like this, as it's likely that I'll be under constant supervision soon. The guards shouldn't enter my chambers, but they'll be monitoring everyone who visits me." She wasn't sure if Anastasia was cut out for this, but she didn't have much of a choice.

Anastasia nodded. "Alright. I'll try to use the maids door into your room when I can and I know it's safe." She told her. "I'll try to find the servants entrances and tunnels so it's easier for you to sneak around and out of the castle if the time comes. How much do you trust your maids?" She asked softly, not sure who might be listening behind the door.

"Not well enough to ask them to help with this," Arianette replied, "But I'll be able to get rid of them easily should we need to meet. I'm sure they're quite excited about caring for the potential next queen of France and will be willing to go fetch me whatever it is that I desire." They were quite gullible, a trust that had always irritated Arianette. Now it seemed like it might prove useful.

Anastasia nodded. "We have to be careful though, Caspian might dismiss more girls faster now that he's likely to pick you. And if he dismisses me, I can't be of any help." She said and played with a strand of hair, deep in thought. "We'll have to cross that bridge when we come to it. But we must both act as if nothing has changed. Though, you'll naturally have to be a bit closer to Caspian. If he thinks he's lost your liking, it might drag Court on longer, giving us more time to work."

"If he tries to dismiss you, I'll ask that you stay at court as one of my ladies," Arianette replied, having already thought of that, "It might arouse some suspicion, but it's far better than you being gone from court. And trust me, I won't have trouble acting as though he's lost my liking." Truthfully, she still wasn't entirely behind this plan. It was incredibly dangerous, and the longer this took, the harder it would be for her to escape due to her baby. She doubted that the fight over her child would ever end if she made it to England, and if the truth was ever found out, she would surely be executed along with Nathaniel.

Anastasia smiled slightly and nodded. "Very well. For now, you should dine in here with me, tonight. Recovering too quickly from something so upsetting might arouse suspicion as well. I'll go have my maids fetch us both some dinner and later tonight we can begin searching for the letters. you can search your room when you go to change and I'll sneak into Nathaniel's before the maids have a chance to clean it tonight." She told her.