170 views
POSSIBLY SOLVED > Romance: illegitimate daughter of a powerful man who grew up in an abbey, pink cover, white text

I read this book between the years 2000 and 2004. It was an adult romance and it was set on an island in a time period where men still fought with swords but were exploring more scientific advancements. I remember a scene where they test a simple version of a glider/plane that one of the side characters designed.
I remember the cover was pink with large white letters. The front paperback cover was cut decoratively along the edges, so the edge of a dark pink page shows. When you lift the cover to view the dark pink page, there is an illustration of either a castle or some ruins. Mostly I remember marble columns.
The main character was the illegitimate daughter of a powerful lord on the island. I believe he was the ruler over the entire island but I'm not completely sure. The woman grew up in an abbey or convent so she could be protected from her father who is not a good man.
I do not remember much about her love interest apart from the fact he has power and he fights well with a sword. I believe he was sent there to rid the island of her father's rule, but I'm not completely sure that part is form the same book.
Thanks for any suggestions! :) 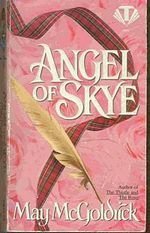 Angel of Skye?
Famed Scottish warrior Alec Macpherson is drawn to lovely Fiona Drummond Stewart after he rescues her from bandits in the forest, not realizing that she is the secret illegitimate daughter of King James IV and the target of the evil schemes of the ambitious Lord Gray.

Alec Macpherson is a mighty warlord and new laird of Skye and the islands of the Outer Hebrides. The Highland chieftain is a giant of man with a gentle heart. One day while out hawking, he stumbles across a beautiful maiden named Fiona. The island people call her the "Angel of Skye" for her unselfish service to the lepers and the sick. Fiona had been raised at a local priory since being dragged from the sea at the age of five. Only the wise old nun who ran the priory knows the secret of Fiona's past, and she guards her secret well. Alec and Fiona fall helplessly in love. Only then does the prioress come forward with the facts surrounding Fiona's birth.

Angel of Skye?
Famed Scottish warrior Alec Macpherson is drawn to lovely Fiona Drummond Stewart after he rescues her from bandits in the forest, not realizing that she is the secre..."

Angel of Skye looks like the book I'm thinking of. I will know for sure when I get a copy of the book. Thanks for responding! :)

Mod
Giving this a bump since Lexi posted recently.

Angel of Skye (other topics)