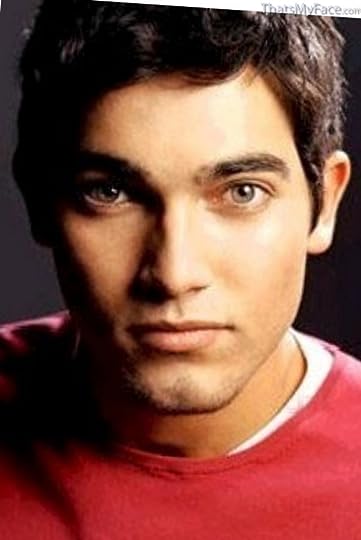 {Details} He looks like one of those stereotypical rebellious people. Slick black hair and rough stubble along his jawline. He has dark eyes and his smile can melt anyone’s heart. If he stands straight, he ends up being around 6 feet tall and it is very evident that he takes very good care of himself physically.

Apparel Usually seen wearing aviators and a sharp looking brown leather jacket that is pretty worn down. It’s the only nice jacket he owns though. He usually wears jeans that are worn down and torn near the ends, but he makes up for it with his nice motorcycle.

[Personality] He’s very snarky and though he may act nice to most people, he doesn’t appreciate being told what to do. He’s true to his appearance though, defying authority and taking huge risks. He’s been on his own for so long he doesn’t care about anything other than himself. He’s very confident and a natural leader.

Ok. It's like 5 am and I haven't slept since yesterday so I'll edit once I wake up :)

Even though Jonah was out of school and lived by himself, it didn't mean that he didn't like to do things that would enhance his intelligence in any way. Every once in a while, he made the trip to the library or to museums around the state. It didn't really matter what he did, since he was alone all the time. He'd been living alone since he'd emancipated himself when he was thirteen. It had been a long trial, but by the end of it, he'd managed to get out his horrible family and live by himself. He even had this sweet motorcycle. He grinned as he sped by an old school bus, parking at the designated area and getting off. He took off his helmet and locked up his like, thankful for the free parking. Even though he was pretty well off, he didn't like spending too much.

He looked back as the school bus also parked and let out a bunch of kids that looked to be in their senior year of high school. He smirked and then walked inside the museum, putting his hands in his pockets as he walked in.

Jonah walked around the museum happily, looking at all the exhibits and reading the pamphlets. While some people might mistake him as rebellious--and he was for the most part-- they completely ignored the intelligent side of him. Sure, he was reckless and a typical teenager, but he actually did like to learn. They automatically assumed that because he lived on his on and didn't communicate with his messed up family, he was the bad kid. When in fact... his family was the bad influence.

As he walked around, he noticed the high schoolers, following a few as they followed a tour guide. He blended in pretty well and could easily be mistaken for a high school student. His eyes landed on one person in particular, curiously watching the girl with the dress. For some reason, she looked so out of place with all of these crazy teenagers. She seemed calm and mature rather than the majority of them. He quickly looked away when he rrealized he was staring and walked away from the group, deciding that he was hungry and he could use some lunch. He had two choices: go out to eat, or eat in the cafe upstairs. But he didn't feel like paying extra for food so he went outside to go find a restaurant.