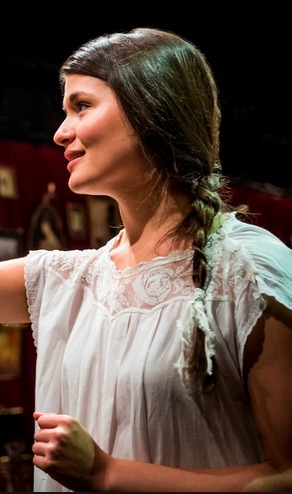 Favorite clothing style/outfit: She dresses like most of the members of the Imperial Court: white dress with empire waistline and dress-length coat

Where does he or she live? What is it like there? She lives in Nikolaevgrad, capital of the Rasiyan Empire. It is a seaside town in the far north with grand enlightenment-era architecture
Defining gestures/movements (i.e., curling his or her lip when he or she speaks, always keeping his or her eyes on the ground, etc.):

Things about his or her appearance he or she would most like to change: she would like to blend in more
Speaking style : soft, slow, and elegant
Pet peeves: general optimism and idealism of people that can never be

Fondest memory: reading in the family library as a child

Temperament : she keeps her anger - and most of her world - in her mind

Things that upset him or her: insults, being told "it's all going to work out"

Things that embarrass him or her: undressing (her coat is her wall), and smiling

This character is highly opinionated about: the truth about the world, love

Things that make him or her happy: being alone without stress, books
Family : one younger brother, mother, and father (her elder sister ran off with a man and is presumed dead)

Deepest, darkest secret: she's in love with the Crown Prince Aleksey and sort of also his sister Kira
Reason he or she kept this secret for so long: it's not acceptable, and love and politics don't mix

Other people's opinions of this character: people feel she's too blunt and discriminate against her for not being married and taking a traditional feminine role and having a mother of Oriental origin

Favorite bands/songs/type of music: not terribly into music
Favorite books: too many
Favorite foods: hot soup and cabbage pies

Political views:
Religion/philosophy of life: believes in a God for certain, is unsure about the way religion is used in her society

Description of his or her bedroom: a baroque chamber with painted ceiling, a normal bedroom in the palace. She is not one for decoration

Any pets? no
Best thing that has ever happened to this character: being born in an aristocratic family

Worst thing that has ever happened to this character: being the court clairvoyant and having to follow Aleksey around
Superstitions: none
Three words to describe this character: honest, reserved, observant
If a song played every time this character walked into the room, what song would it be? I don't know

she's become good about hiding her emotions and insecurities

Mainly she just feels uncomfortable with strangers. The only person she's really blunt to is Aleksey because she knows him well. We'll see how she plays out in the actual story.

I have the first chapter of it at https://www.goodreads.com/topic/show/... 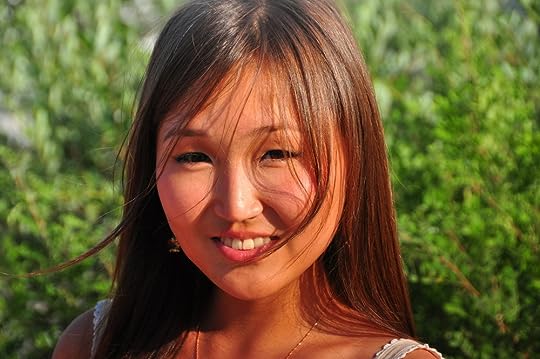 Where does he or she live? What is it like there? Valentina is from Vedernikovo province in Rasiya, which is rural, semiarctic and very cold.

Defining gestures/movements: Valentina is always an alert conversationalist who tends to look directly at the people she speaks to

Things about his or her appearance he or she would most like to change:
Speaking style (fast, talkative, monotone, etc.): a bit slower than normal, as the tongue of her reindeer-herding people is her native language

Pet peeves: condescending people
Fondest memory: her studies back in Vedernikovo
Hobbies/interests: she finds remarkable solace in reading and studying but is also fond of sharing her interests and dreams with others

Insecurities: being from a poor family but at the imperial court
Quirks/eccentricities: none
Temperament : Valentina is very opinionated and thus can get angry with stubborn people who disagree with her

Negative traits: very much a pragmatist and not fond of the manners and frills in court life
Things that upset him or her: injustice, discrimination, ignorance

Things that embarrass him or her: being called pet names and reminded of her childhood