16 views
Writing > The Underrated Comet of 1812: An article in several parts

Mod
Okay guys, pardon my generalizations, I just need to get this out of my head because otherwise I won't calm down. I see there may be irony or even hypocrisy in this piece but I'm saying what I have to say.

I've felt like this for a while, to be honest, but it was only when I found an article in this week's New York Times magazine called "The CEO of Hamilton inc" that this idea really took root.

Basically, every time I watch or read something about the growing sensation of Hamilton, I start getting ticked off. By no means am I angry at Hamilton in of itself. It deserves all its praise and maybe more.

Despite this, Ladies and Gentlemen, I implore you to turn your eyes away just one moment from the ubiquitous black-and-gold logo which may dominate your computer screen, hold center-stage on your phone, or sit in your lap and behold a nineteenth-century Russia of chandeliers, borscht, and a cast of twenty actors plus and eight-piece band making their respective paths across a large room.

Mod
In the words of author Steven Surkin "This is Tolstoy, yes, and Tolstoy no." In my own, this is Natasha, Pierre and the Great Comet of 1812, a period but equally modern show that takes the idea of 1812 Moscow out of a paragraph in a textbook and right before your eyes with a mix of classical, electronic, musical theater, and various other styles performed by a multiracial cast and small band. 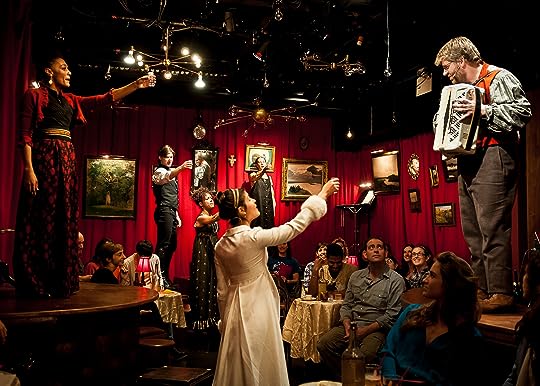 What, pray tell, does this strange and - in comparison with Hamilton - obscure show have to do with Hamilton? To start, both shows sound awfully strange on paper. A hip hop/jazz/R&B show telling the story of one of our most overlooked founding fathers? A slice of War and Peace volume II transformed into a dinner-theater pop opera?

Mod
It seems highly likely that both Lin-Manuel Miranda and Dave Malloy, Natasha, Pierre, and the Great Comet of 1812's creator, experienced doubts that their stories would ever hit the stage. In one article whose title I fail to remember due to its discovery being online via an image search, Dave Malloy explicitly said that Great Comet was merely an idea floating around his head while he read War and Peace on a cruise ship, playing piano.

That was, until he received a commission from the Ars Nova theater and he brought up the idea, thinking it would be turned down. Instead, they nurtured it to make it a show praised by numerous critics and even Stephen Schwartz, composer of Wicked.

Not only that, Great Comet's main connection to Hamilton is that it served as a launch for the 22-year-old recent Julliard graduate who would become Hamilton's leading lady: Phillipa Soo.

And here lies the epicenter of my rage, an exaggerated term, but the shortest I can find. Basically, no one knew who Phillipa Soo was until her "star-born performance" as Natasha in a show Which Lin-Manuel Miranda decided to see, thus bringing her into what would become the Hamilton cast. However, at the present, Hamilton is all we see when a search of her name is entered into google.

Mod
The entire cast of Hamilton could have been born out of their mothers' wombs as cast members of Hamilton and the general public would be none the wiser, save the few of us who will look up once in a while and go "What about In The Heights?""What about Rent?" 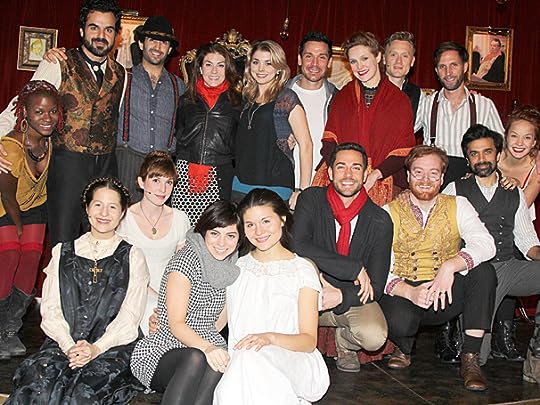 And me:
"What about Natasha, Pierre and the Great Comet of 1812?"
Again, I do love Hamilton, but couldn't we shed a little spotlight on an equally amazing and unique show which happens to also feature a historical setting, literary inspiration, a cast who sometimes doesn't look the way the characters originally were, a similarly laughable but remarkably well-executed premise, and most of all, stunning and catchy numbers from a range of musical styles which flow beautifully from one to the other?

[Another look at Great Comet's set]

Needless to say, I harbor no delusions about the broader cultural appeal of Hamilton. It's about America. It's on Boradway. It was written by an actor/composer with one Tony-award-winning much more mainstream show already under his belt rather than Dave Malloy, who moved from Berkeley, California only a few years before writing Great Comet and leans much more to the experimental end of things. And Hamilton was likely intended for much broader an audience than a small, intimate show like Great Comet. Hamilton has seven hundred pages and fifty-some years of exhilirating and heartbreaking source material to cover. Great Comet only has seventy-some and a storyline that takes only a week to unfold, with almost half as many songs as Hamilton, with less room for the "feels" my sister and I encountered listening to numbers like "Hurricane," It's Quiet Uptown," "Dear Theodosia" and "Who Lives, who dies, who tells your story." 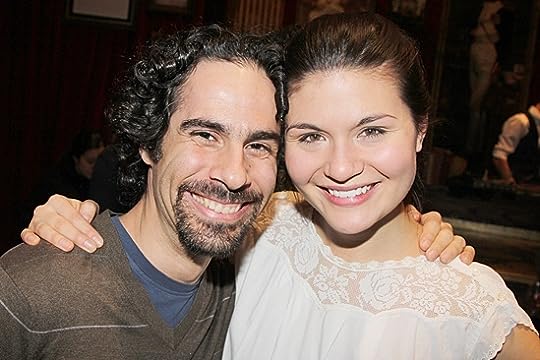 [Alex Lacamoire with Phillipa Soo after a Great Comet show]

In addition, Hamilton tells a classic "Hero's Journey" story, only with less distinct heroes and villains. (When asked by the New York Times book review who his favorite villains were, Miranda said he "[did not] believe in villains"). Hamilton's story is one of real historical figures we mostly know or think we know, rather than Great Comet's fictional ones simply "caught in the wave of history" as Naploeon's troops move closer and closer to their city. Nevertheless, they have an equally compelling tale of their own which may cross the boundaries of time, place, class, and culture even more so than the distinctly American Hamilton.

Mod
Great Comet's storyline is one of Natasha, a naive young girl with a fiance at war entering Moscow society only to be seduced, lose her reputation, and barely be saved from abduction by the courage and sisterly love of her orphan cousin Sonya (who gives most of the show's "feels" in her act two ballad "Sonya Alone"). 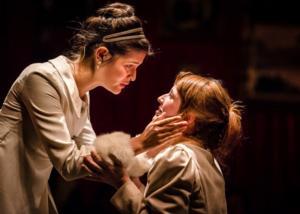 Like many heroines in contemporary young adult literature, Natasha falls for the "sexy bad boy" type. Unlike in most contemporary literature, said 'sexy bad boy' is married and the elopement plans are all for his own amusement, despite her genuine love for him. Thus, Natasha's tale is one of an mistake in youth, the kind many make to a lesser degree, and she shouldn't have received all the slut-shaming she gets once the elopement plans leak. Like many a character who has come unknowingly into such a situation, Natasha needs love, forgiveness, and a way to prove she is more than a girl to be gossiped about and shamed.

Such a heroine may be condemned as stupid, sexist, or both, but Great Comet is by no means sexist, a term which would doubtlessly prove its inferiority to Hamilton.

Mod
The cast is equal parts male and female. The director, MacArthur-genius-grant-winning set designer, and costume designer are female, while said roles in Hamilton are filled by men. Former cast members Soo and Shaina Taub (There's a House, Old Hats) as well as Brittain Ashford who continues her role for this fall's Broadway production are most definitely feminists.

Despite the fate and actions of Natasha, it is not a man who really saves her reputation. Though only Pierre can comfort her in the failed elopement's aftermath due to Sonya's involvement in the stopping of the elopement, it was really Sonya who saved Natasha from Anatole rather than any of the men in her life.

Sure, not all the characters are badass fighters, but who was in Nineteenth-century Russia? Who, in an era of blatant sexism, anti-semitism, and racism, would be a model of justice by modern standards? Of course, with a bit of cerebration, we would agree that few were or could be, in either Hamilton or Great Comet.

Mod
Though I do, in this piece, argue for people to pay more attention to Great Comet, it cannot be and was not designed to be exactly like Hamilton in its image or management. Both certainly have their similarities and must carry misleading labels ("hip-hop musical" and "electropop opera" are hardly broad enough terms to describe the wide varieties of styles in Hamilton and Great Comet), but they will each carry their own brand of storytelling as long as they run.

For Hamilton, it is about redefining our past and tying it to our present with songs that scream "Be here." "Be Now" "Who lives, who dies, who tells your story?" For Natasha, Pierre and the Great Comet of 1812 it's about rich and evocative but also quirky sung dialogue between intimate small-group numbers using ensembles only when necessary to explore the man facets of human nature. Thus, I would not imagine Great Comet with the commercialized sort of brand Hamilton has. I doubt Dave Malloy or the indie singer-songwriters who have been part of the Great Comet from the beginning would want this from their show nor is it plausible with this kind of story from here and now. It is not a show that will define "Here and Now," it's almost timeless.

Anyhow, I digress. All I ask of you guys is to think of Phillipa Soo as not only Eliza, but Natasha too, and consider that in regards to other Hamilton cast members (I love In the Heights too and would love to see more people talking about it not just in terms of Hamilton). In regards to Great Comet, Natasha Pierre and the Great Comet of 1812, think about a whole nother show, maybe with 23-year-old Phillipa Soo in a fur-edged pelisse asking "Everyone lives, no one dies, but who will tell my story?" And though a moderately hyped Broadway cast - headed by Josh Groban and Denee Benton from the Book of Mormon national tour - is making its way through the theater news, a Phillipa Soo Great Comet is something we may not see again except immortalized in the two-disc cast recording found Here. Even if you think it's not your thing, I hated rap and still listened to Hamilton and, though mainstream hip-hop will never be my thing - I definitely like it, so check it out :)