11 views
Writing > A matter of Time

Mod
A Matter of Time https://www.goodreads.com/story/show/... 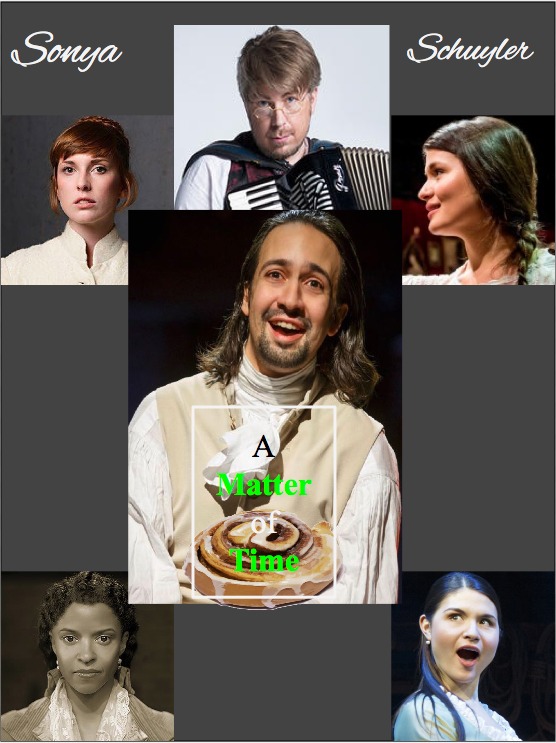 Mod
The waves rocked the ship back and forth in way that gave Alexander Hamilton a great deal of trouble sleeping. The ship was supposed to leave about four weeks ago, but a number of things had delayed it. Winter, Alexander ventured, would come soon, and with it winter storms. That wouldn’t be good. He glanced across the room at the rest of the people on board, all asleep. The ship jerked forward. Alexander was restless. He might as well see what was going on.

Silently, he tiptoed out onto the deck and peered over the edge. A huge whirlpool had formed in front of him. He reached forward.

It pulled him in.

He arrived in a bar. Even though it was noon, men had already begun getting drunk and standing on tables. Maybe he had arrived in New York, where he was supposed to go on that ship. Maybe all that happened with the storm on the ship was really just a nightmare.

He found a man a bit older than him standing away from the drunken hordes. His face was red and he had a shot glass next to his book that he held in shaking hands.

The other men in the room were chattering in an unintelligible manner. They must all have been drunk because Alexander couldn’t make out a single world they said.

He approached the man with the book.
“Pardon me,” he asked, “but are you Aaron Burr, sir?"
“Nyet,” he replied.
Alexander furrowed for a second, taking in more of the drunken men’s speech. It was then he realized they were not merely drunk but drunk in a foreign language and even the partially sane man with the book was speaking Russian.

He frowned. “Alexander… Hamilton, eh? You must be English, only you appear more likely to be Spanish.”
Alexander gazed puzzled around the bar.
“Where am I?”

Mod
The man with the book sighed. “Welcome to Moscow. I’m Pierre Bezukhov.” He held out his shaking hand. “There’s a war going on.” He paused. “You’re Alexander, huh? Like our Tsar.”

“Tsar?” Alexander asked. “Isn’t Catherine the Great still empress?”
Pierre looked puzzled.
“You’re lying.” He said. “Either that or wherever you came from must be incredibly backward. The year is 1812 and Napoleon is nearing Moscow closer and closer every day.”

Alexander’s head spun with the shock. First of all, he found himself in a bar in Russia and then it turned out to be forty years in the future. How did he not notice that before? The men were not wearing wigs of any sort and their coats and breeches looked a good deal different from what he’d seen in St. Croix or what he had expected to see in New York. There was something in the way they talked and carried themselves that also differed from anything Alexander had seen.

“I don’t know where I am,” Alexander told Pierre. “I don’t even know how I got here. I was on a boat to New York and there was this big storm in the Caribbean that blew our ship off course and I fell into the water… only to get here. And I suddenly realize I’m not wet. And I’m standing here. I guess it must have taken me into the future.”

Pierre nodded. “Caribbean, eh? So that’s where you’re from. English colonies, I presume.”
Alexander nodded. “We were bound for New York. But then as storm came and I was pulled into the water. I guess it must have brought me here.”

“You’re not drunk?” He asked.
“I’ve never been,” Alexander replied.
Pierre held Alexander’s hands in his larger, hairier ones. “You’re not shaking either.”
Several heads turned around to stare.

“Kto ti?” a man asked drowsily.
“Ya ne vi ponimayet,” muttered another man.
“I suggest you get out of here, son,” Pierre grumbled. “I should too. This is no place for an idealistic young man like you. Come with me.”

Alexander nodded slowly. “Will most people here understand me?” He asked.

Mod
Pierre sighed deeply. “This is a world where people reject their heritage. They don’t want to be Russian, like the peasants who eke out a living tied to the land. They’re forced to work for the landlords who get all the crops they harvest…”

“That’s unbelievable! Why do they do that?”
Pierre shook his head. “I was like you once,” he muttered to himself. “But that’s the way it’s always been. We never had a renaissance here. But no one has the heart to change things here….”
“So will they understand me?” Alexander asked again.

Pierre nodded. “Sadly, most people here have rejected their heritage and most speak English and French to seem advanced. Even though we’re so far behind. Ignore the glitter, Mr… Hamilton, this world is broken.”

Mod
Pierre’s wife, Helene greeted them at the door of his house.
“Ohh…” She said, “Vous êtes charmante. Tu t’appelles comment?”
“What?” Alexander asked.
“She’s asking what your name is,” Pierre said.

“ Alexander Hamilton ,” He said. “My name is Alexander Hamilton.”
“Ohh....,” Helene replied. “Well, there is a new opera coming demain, tomorrow.” Perhaps you would enjoy seeing it with Dolokhov and myself.”
Alexander nodded. “Alright.”

For the present, he would be occupied with the Bezukhov library. It would take a while for him to read everything he could get his hands on.

The carriage was bigger than anything Alexander had ever ridden in. Not to say that the carts one rides in St. Croix are all that big. The seats were plush and red and actually comfortable to sit in. From what he had seen on the map on Pierre’s desk, the opera was a few blocks from their house. However, Helene stopped a bit before the halfway point between their house and the theater. She stepped out of the carriage and knocked on the front door of some house.
A few minutes later, she came out with a man, who kissed her hand and started talking amiably with her in French. It didn’t take me long to figure out what was going on.

“Is my brother coming, Dolokhov?” she asked.
The man Alexander presumed to be Dolokhov shrugged. “He’ll probably be late.”
Alexander looked around to find the carriage driver gone.
“Could you…” Helene began.
Alexander nodded. Even though he didn’t know the next thing about carriage driving.
No one said anything the rest of the walk towards his carriage.

Mod
The Opera
The carriage rocked back and forth. Alexander felt a sickening sensation in my stomach as if the meager supper he had the night of the storm had made its way back up to his mouth. Then a crash noise came as he heard the squeak of the carriage hitting something.
“Ow,” said a male voice, higher than Dolokhov’s
“Anatole?” Helene asked.
“Y-yes,” Anatole squeaked.
“Is he alright?” Alexander asked.
“I-I broke my arm,” he replied. “I-I’ll have to miss out on the opera tonight, tell me what it’s like.” (view spoiler)[ in the musical, he doesn’t actually break his arm (hide spoiler)] 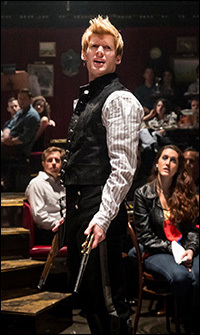 Mod
The Opera was not to start for another few minutes, but everyone came early to share the latest gossip in their respective boxes. Sofia, “Sonya” Rostova had arrived a few moments before with her cousin Natalya, “Natasha” and Natasha’s godmother Marya Dmitrievna. It was Marya’s place to gossip, she supposed.

Sonya nodded reluctantly. It was common knowledge that Helene Bezukhova had been cheating on her drunken husband Pierre with the younger, more dashing Fedya Dolokhov, only no one said it out loud. Probably most everyone had been cheating on their spouses too. As a widowed old maid, Marya had the right to gossip about it.

The last few patrons spilled in, among them Countess Bezukhova. Dolokhov, who she knew, was close behind, but next to Helene stood a stranger perhaps about her age, who Sonya didn’t recognize, as she and Natasha made their way into the foyer. 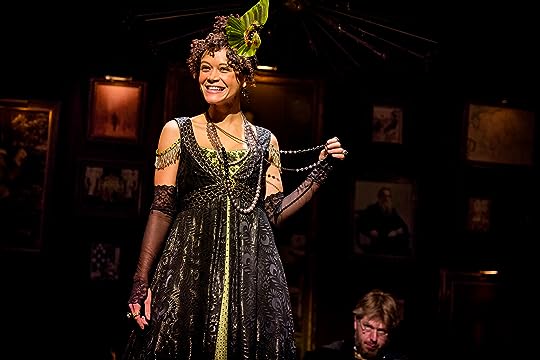 “...A pity,” Helene was saying to an associate of hers. “Anatole was hit by a carriage.”

”Ah, quel dommage!" exclaimed her friend. “But who is this?” She gestured toward the stranger.

“My name is Alexander Hamilton,” he replied. “I have only come to Moscow recently.”

Helene, her friend and the stranger continued making their way through the crowd, the rest of their conversation obscured by its noise. Natasha found Sonya soon after she spotted the conversation with the stranger, apparently called Alexander Hamilton. As they girls made a bit of unremarkable small talk, Helene came toward them.

“The two remarkably pretty girls,” she gushed, holding Dolokhov’s arm as they showed themselves off to the world while Alexander approached them.

“So, Helene was talking about you,” he said.

“How do you know Helene?” Sonya asked.

“It’s complicated,” he replied. “I’ll tell you when we’re out of the foyer.” He held his hand out. “Alexander Hamilton.” 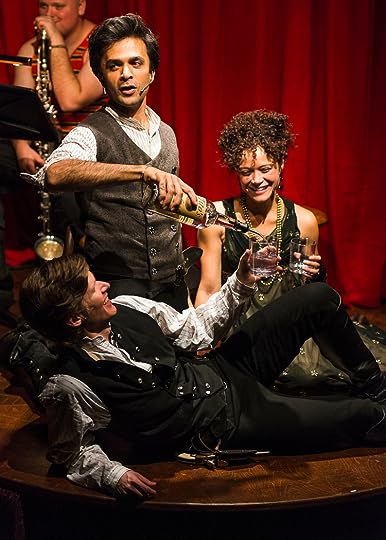 She nodded. “Where’s your family from?”
“Unimportant, there’s a million things I haven’t done.”
“Sofia Rostova,” she said.
“Natalya Rostova,” said Natasha.
“My cousin,” Sonya added.
“It’s a pleasure to meet you,” he said.
A chime announced the start of the opera.

Mod
It would be impossible to say Alexander knew what to expect from an “avant-garde opera” when the curtain rose on a stage set with three oddly placed chairs and an upside-down table. The crowd buzzed with excitement. According to Helene’s friend Marina, if it were a miserable failure she could relate all the horrors that befell her ears as she watched. If it were a success, she could boast about how she was one of the first ones to see and love it.

Was this the new fad, Alexander wondered, or simply the traditional behavior of what appeared to be Moscow’s well-to-do? 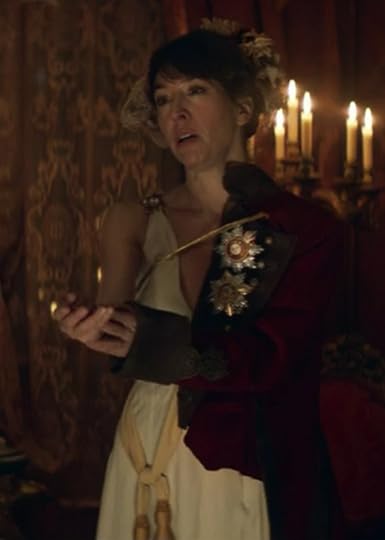 The leading lady, in a strange costume where she had half a jacket attached to a dress, belted a note that reminded him of a doorhinge. She then extinguished a few candles as a chorus entered. The cello line became more pronounced. The instruments suddenly seemed out of tune while the music itself jumped around and invaded the ears with a storm of screeching violins that would never leave his head.

Strangely, when Alexander turned around, Helene and Marina both looked pleased, applauding mechanically as if in a trance everyone had fallen under except for him. He blamed it on the drinks they had brought into the box and quickly downed, leaving several empty glasses on the table.

Alexander’s focus shifted to Natalya, who stood behind her cousin Sofia deeply in trance. Though the music affected all but him and Sofia, it was Natalya who Alexander found himself drawn to every time he stared back at them.

Maybe it was the way her small dark eyes reflected the candlelight or perhaps the thing called fate so many people talked to me about that he never paid heed to was real.

But he had only met her.