Thanks, so who would you rather play? Elliot or Nick?

Lol okay, let me create me character then ^^ 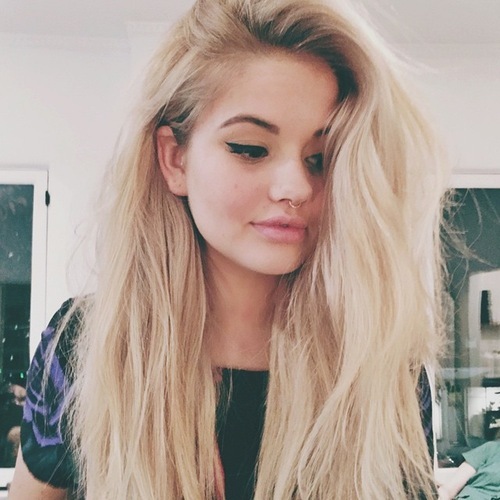 ↳Personality↴ TBRPD
↳History↴ Born to Gwen Munch and John Munch, Valentina was raised in a foster home when she was a baby because John could not take care of her himself, although when she turned five. Valentina also had a twin brother named Cole Munch that was also raised with her, John raised them both when he realzied he could not live with knowing he gave up his own children, so he raised them both. Valentina loved her father and knew about her story, she didn't care as long as her father always loved her, in which he did, in fact, she is his favorite because, daddies little girl, wanted to be just like him. Valentina grew up learning everything from her father, and now at age 25 she is about to become an detective in his precinct.

Very nice. Now where would you like to start?

Munch was in Cragen's office with a woman who had blonde hair and a nose ring, an Irish accent could be heard from the woman's voice as she spoke, Fin just stood and watched with a bunch of other detectives as Cragen spoke to the two. " I wonder who the girl is, she looks a little like Munch," Fin said to Elliot.

"She does have some resemblance" Elliott replied as he still there watching. Could this be his new partner? Ever since Olivia had left they told him he would be getting another partner

" Wait. Didn't Munch say he had a daughter? What was her name again?" Fin said, he went over to Munch's desk and began rummaging around, he kept looking at the picture of two young kids and Munch, he ignored it and kept looking.

message 13: by [deleted user] (new)
Jun 09, 2016 04:32PM
Elliott decided to just sit there. He was growing more and more curious to who this new girl was. But he pushed the thought away when he heard the phone ring by his desk. He walked over and answered it. "Special Victims" he greeted and listened on the phone

Fin was still rummaging, he found a framed birth certificate in John's drawer, he found two and picked them both up and read them, " He does have a daughter, and a son, his son's name is Cole Valentine Munch and his daughter's name is....., Fin began but was interrupted by Munch himself. " Valentina John Munch."
" Sorry Munch, I was just curious," Fin said.
" Save it Fin, Elliot," John said coming over.

reply | flag
message 15: by [deleted user] (new)
Jun 09, 2016 04:47PM
Elliott held a finger up, stopping him from talking. "Ma'am, just calm down." His face went blank before turning serious. "Hold on and I'll be out" He said as he got off the phone and grabbed his jacket. "A Sarah called, saying someone was following her. It matched the description of the Gunnar case" he told him

" Well before you go check it out Elliot, This is Detective Valentina John Munch, your new partner, and John's daughter, don't treat her like she's new, she knows what she's doing, bring her alone Elliot," Cragen said as he went back to his office, John went to his desk and he swiped the framed birth certificates from Fin's hands and put them back in their places in a drawer.

Valentina hurried after him and quickly got into the car, " No need to brief me on the Gunnar case, my dad already did and then Cragen did as well, but they didn't tell me the victimology," Valentina said, a strict Irish accent on her lips.

reply | flag
message 19: by [deleted user] (new)
Jun 09, 2016 07:07PM
"There's been two victims so far, but the first one was found dead. The second was found nearly dead. Shes recovering in the hospital right now. But if we don't hurry, they'll be a third victim" he told her as he sped away from the precinct and towards the woman that called.

Valentina nodded, she began jotting some things down, but couldn't concentrate, she reached into her pocket and grabbed her iPod, she put her headphones on and began writing again. Valentina began jotting things again and she narrrowed her eyes, " The M.O. matches a similar M.O. to a serial killer my FBI team profiled years ago," Valentina mumbled, headphones still in her ears.

reply | flag
message 21: by [deleted user] (new)
Jun 09, 2016 10:04PM
"FBI? You were in the FBI?" he asked as he continued driving down the road. He was growing more and more curious about her by the second. Elliott did have a military background, being in the Marines, but never in the FBI.

" Yes," Valentina mumbled as she began writing and drawing in her little notebook, " Anything else about the M.O.?" Valentina asked him.

reply | flag
message 23: by [deleted user] (new)
Jun 09, 2016 10:12PM
"We're not entirely sure, but he seems to have a problem with therapists, considering that what both victims were" he told her. By that time he was pulling up to the place the woman was at.

Valentina nodded, " Same with our serial killer," Valentina said as she stepped out, she looked at Elliot, " Where did this woman call you from?" Valentina asked.

" Do you know what this woman looks like?" Valentina asked, she brought out her phone if needed, it had a law made app that was used by all law enforcement officers to help with cases,

reply | flag
message 27: by [deleted user] (new)
Jun 10, 2016 12:55AM
"No but I told her to go to a public place and stay there until we got here. Maybe she's in the café at the corner" he told her and was about to say something what before he was interrupted a scream. He immediately began running towards the scream

Valentina ran faster, she passed Elliot and ran towards the scream, she took her earbuds out and kept running until she reached the source, she couldn't see anything so she called out, " SARAH!" Valentina called out.

reply | flag
message 29: by [deleted user] (new)
Jun 12, 2016 12:47PM
Elliot was soon beside her, looking around for Sarah when something got his attention out of the corner of his eye. He drew his gun and snapped to the left, pointing at a guy before they took off. "Cut him off" he told her as he took off after the guy. "FREEZE" He yelled as he ran after him

Valentina nodded she ran and found another way, soon she hopped over the fence just in time and jumped onto the guy, crushing him to the ground, she waited for Elliot, she smirked and got close, " You like going after women who can't defend themselves? Where's Sarah?" Valentina demanded as she shoved the guys face into the cement.

reply | flag
message 32: by [deleted user] (new)
Jun 13, 2016 10:40AM
Elliott showed up seconds after she did. "Nice job" he told her as he knelt down inverting if the guy. "Go ahead, take me to jail, but you'll never find that woman" the guy a smirk. Elliott helped get him up after handcuffing him. He stuffed him into the backseat if his car

Valentina wasn't even out of breath, she glared at the guy before she then went back over to the spot she had jumped on him, she began looking around just in case the man dropped anything, she she retraced his steps back to the area he was just in.

reply | flag
message 34: by [deleted user] (new)
Jun 13, 2016 12:48PM
Elliott started behind to make sure the guy wasn't going anywhere. He went ahead and called in and told everyone else that they have suspect in custody

Valentina narrowed her eyes, she noticed something in the dumpster, she made her way over and made sure it wasn't a human being, when she sure it wasn't, she jumped into the dumpster and grabbed the thing she saw, she looked at it and smelled it, it had the guys cologne wrapped all over, she hopped out and went back to Elliot, " Looks like he was trying to hide something," Valentina said holding up a black bag that looked unusually heavy and reeked of the guys cologne.

reply | flag
message 37: by [deleted user] (new)
Jun 15, 2016 11:58AM
"Well well well, let's see then" he told her with a slight smirk and began skipping in a pair of gloves walking over to where she was at before opening the bag.

Valentina held the bag, her hands hadn't touched it, only her sleeves that were covering her hands.

reply | flag
message 39: by [deleted user] (new)
Jun 15, 2016 12:07PM
Just when Elliott was about to look inside, screeching tires could be heard in the distance. His head snapped up to see a vehicle hurling down the road towards them. Before Elliott could react to anything else, an explosion of gunfire redeveloped the vehicle

(( I don't get the last part, what do you mean gunfire escaped the vehicle? ))

Valentina grabbed Elliot by the arm and pulled him down behind their car, she popped her head up, gun drawn and she began shooting at the shooter from the other vehicle. Valentina grabbed her phone, and without even putting the gun down, she snapped a photo of the vehicle, in hope of getting a license plate or something.

Valentina called a bus as soon as she was finished with the picture, she got down and held a hand tightly over his, " You're losing a lot of blood," Valentina muttered, she had got hit in the leg, but she ignored the seering pain and focused on Elliot

reply | flag
message 46: by [deleted user] (new)
Jun 15, 2016 12:49PM
"I'm fine. Check on the perp." he told her as he got up and started to look into the vehicle. He opened the and seen the guy just laying there. "He's still has a pulse" he told her. Soon an ambulance could be heard approaching from a distance

Valentina tried standing once again, she stood with a hiss of pain and comes over to the perp and checks his pulse, seeing Elliot was correct, " He does have a pulse but he's not gonna live for long, one of the bullets hit an major artery," Valentina said, she was holding up pretty well, but her leg was bleeding too much. " Good, God don't let my father go crazy," Valentina muttered as she held her leg.