Hey! So, did you have an idea?

Not really at the moment, did you?

Well, what genre do you want to do first off?

Fantasy or supernatural is what I am leaning towards lately, but anything you have an idea with works for me, I'm flexible lol.

That sounds good to me!

Ok. So there are two main kingdoms, northern and southern. There was a middle kingdom, but the king was assassinated and so the two remaining kingdoms are fighting over the territory. The war has come to a standstill and the land is being devastated. The northern kingdom kills all wizards, sorceresses, herbalists, and humanoids because they are considered creatures or sacrilegious in practice. The southern kingdom has a more manipulative king, however he tolerates the existence of sentient magical creatures. Long before the war, to exterminate any monsters that threatened humanity Witchers were created. Genetically altered men who had inhuman capabilities at a great cost. I would be a Witcher, and you could be a sorceress, elf, dwarf, etc. Both of us being skilled, the Southern Emperor asks us to find his missing daughter in the warring states.

Awesome I will be a sorcereress. Do you make characters or dive right in?

I like to make characters, just to establish baseline personality and facts, etc. Ya know?

Sounds good to me, I prefer characters as well but have ran in to a couple people that don't do them.

Yeah me too. It's super late here, so ill post mine tomorrow. Night!

Sounds good, my pain pills are starting to make me drowsy so
Mine may or may not be up lol. Night!

Personality:
Geralt does not like to be ordered around or provoked. He can be cold and ruthless to people who are wicked and malevolent. He is by nature a loner and an outcast, with a ruthless streak to him that makes him extremely dangerous when provoked. Most of the time he can be apathetic, cynical, and threatening. Despite his outwardly cold nature, behind his exterior hides a fiercely loyal friend, and a man of good humor and a giver of sound advice.. He is also very protective and loyal to his friends and companions and is willing to go great lengths for those who matter to him. He can be kind-hearted and caring with the people he loves.

Goals: To find happiness in his life and to settle down.
Likes: Women, wine, and baths.
Dislikes: Racists, rulers, or evildoers.

Face Structure: A strong jaw with peircing, intense eyes. A very stoic figure.
Body Structure: As is the case with all Witchers, Geralt is in peak physical shape, maintaining it through monster slaying.
Hair: Geralt has white hair as a result of extra mutations preformed on him as he became a witcher.
Eyes: His eyes are an amber/orange, like a cat's eyes. These allow him to see better in the dark and mark him as a Witcher.
Weight: 187lbs
Height:5'11
Distinguishable Markings: A large scar on his left eye, with scars littering the rest of his body.

::Background::
Geralt is the son of the sorceress Visenna and, presumably, the warrior Korin. Shortly after his birth, Geralt was taken by his mother to the School of the Wolf at the stronghold of Kaer Morhen. There, Geralt was trained and made to be a witcher. He survived the many blistering mutations required to grant witchers their abilities, and passed the Trial of the Grasses. Geralt's training and physical modifications provided him with superhuman physical and mental abilities, including heightened reflexes, increased speed, great strength, and enhanced hearing as well as slowed aging.

Due to his brilliant success in training, Geralt was selected for additional mutation experiments. He is the only witcher to have survived these experiments, his stark white hair being a side effect of these additional mutations. After finishing his witcher training, Geralt embarked into the world on a horse named Roach, a name he would bestow upon every one of his later horses. Thus, he became a monster slayer for hire.

Weapon of Choice: A steel and silver sword, for humans and monsters respectively. 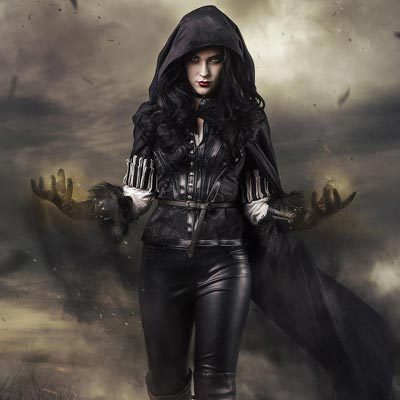 Personality
Yennefer is deep and confusing. She had fiery tempermant, beautiful, and clever. She is very kind-hearted, but has difficulty expressing her kind nature because of what she has lived through.

~Background~
Yennefer lived in the capital city of Aedirn-Vengerberg. She was the youngest member of the Brotherhood of Sorcerers and later the Lode of Sorceresses attempted to recruit her. A former royal advisor to King Demavend of Aedirn.

Awesome! So, who is going first?

Would you please? I have to finish something up and will be back soon. ^•^

Sure, I may not finish it tonight though.

Geralt swung his silver blade down, carving a gash into the Griffin's flesh. The beast let out a shriek and fell to the earth, its body littered with wounds. Drawing his knife, Geralt began taking the beast's head. After cutting through the last of the tissue, he planted the head on his trophy hook, which was attached to Roach. Geralt mounted Roach and rode for the Niilfgaurdian garrison, to turn in the bounty on the Griffin. The road was sandy and wet, but short.
Geralt wanted his coin, and then to get on his way. He was surprised to hear from their captain that he was requested in Vizima, where the emperor was... "And if I refuse?" He asked gruffly, reading the man's face. "You dont." He replied, crossing his arms. After mounting their horses, some time later they reached their destination. Geralt was immediately taken to a room where he was bathed and shaven, and dressed in new clothes. Geralt sighed, trying to stretch out the restrictive fabric, but to no avail.

Yennefer was relaxing in her bath when a knock at the door interrupted. Glaring at the door annoyed she flicked her wrist opening it for the guard. "What do you want?" She snapped, "I told all of you I did not want to be disturbed.
"You have been requested to go To Vizima." The guard said averting his eyes from Yennefer the best he could, but her beauty kept bringing his eyes back to her.
Yenna sighed, "Fine. Get out so I can dress and be on my way then. Once he was gone she dried off and got dressed. Creating a portal she was able to get to Vizima easily. Once where she was suppose to be she was brought to the same room as Geralt.