Mod
Now available! The [very] long-awaited 7th & final volume in our Jane Austen Northanger Abbey Horrid Novels series, HORRID MYSTERIES (1796). Michael Sadleir calls it 'a strange, wild work, dealing unashamedly in the supernatural, written with a lurid power ... the most defiantly fantastic of any novel of the period ... no Gothic novel of the period can rival it.' This edition, the first in almost 50 years, reprints the original four-volume first edition and features a new intro by Prof. Allen Grove. 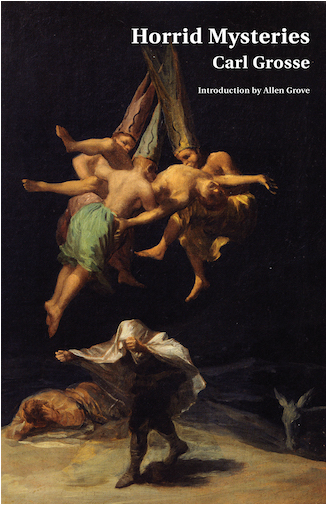 Horrid Mysteries (1796) by Carl Grosse, with a new introduction by Allen Grove.

A bizarre work whose labyrinthine plot defies summary, Horrid Mysteries (1796) recounts the experiences of Don Carlos and his friend, the Marquis of G******, who become entangled in the web of a secret society bent on world domination. As the heroes flee from place to place across Europe, the agents of this dark confederacy, seemingly possessed of supernatural powers, are always at their heels—and death lies around every corner!

Unavailable for nearly 50 years, this unabashedly lurid Gothic novel written by an enigmatic German who styled himself the “Marquis of Grosse” and “Marquis of Pharnusia” returns to print at last as the seventh and final reissue in Valancourt’s series of the rare Gothic novels mentioned in Jane Austen’s Northanger Abbey. This edition includes a new introduction by Prof. Allen W. Grove.

“A strange, wild work, dealing unashamedly in the supernatural, written with a lurid power ... the most defiantly fantastic of any novel of the period ... I am aware of no Gothic novel of the period that can rival it.” - Michael Sadleir, The Northanger Novels: A Footnote to Jane Austen

“Remarkable for its sombre and fearful power, a vehemence which grips the reader and holds him fast.” - Montague Summers, The Gothic Quest

“Certainly no novel to survive from the Gothic period is stranger, darker, or more precipitately irrational.” - Prof. Frederick S. Frank, The First Gothics

Available worldwide in paperback and ebook

I just outdid myself in impulse buying. Not only have I already ordered this book, but today I bought The Midnight Bell, Clermont, The Orphan of the Rhine, and The Mysterious Warning. I couldn't help myself.

You're in for quite a treat with Francis Lathom. He's the reason we started Valancourt 11 years ago.

You're in for quite a treat with Francis Lathom. He's the reason we started Valancourt 11 years ago."

I'm sure they'll all be worth the eyeroll I'm going to get when they all come in at once.