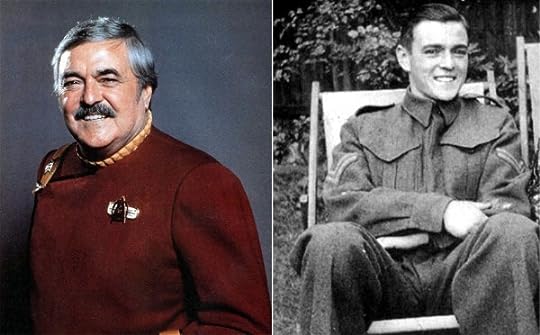 Sometimes you find out something about your favorite movie stars that is just too awesome not to share. Many of you might already know this, but for those who don't, James Doohan (Scotty) from Star Trek TOS participated in D-Day and was shot six times, including missing a finger which he took pains to hide during the shooting of Star Trek.

Awesome! Any other favorite sci-fi movie stars or authors people can think of who are real-life heroes?

He didn't really hide his hand so much as the show avoided it. In the documentary Trekkies, you can see Denise Crosby marveling over his nine-fingered handprint.

Christopher Lee was a secret agent and commado during WWII. He worked with a guy named Ian Fleming, who later partially based his most famous creation on Lee. Lee's activities as a member of the Ministry of Ungentlemanly Warfare are classified to this day.

Brigadier General James Stewart flew numerous combat missions in WWII, using his charm to persuade the Army Air Corps to allow him to fly despite being too tall, too thin, too old and too famous. He survived despite insanely high attrition rates in his bomber squadron because he was one of the best pilots America had. His first movie after the war was the box office flop It's A Wonderful Life.

DeForest Kelly was in the Army Air Force during WW II.

I was raised by my grandparents who had my great-uncles over every weekend with their WWII and Korean war stories, so I have an immense amount of respect for all things military. Stuff like this is Borg Queen candy 3:-)

I knew about this, but recently I was watching several episodes of the original series and I am amazed how well he hid it. I sometimes wondered if they used "hand doubles" in places.

Another little interesting piece of history, the part of Scotty was written for him. I forget the details though. He also wrote several novels (well, co-authored), which are still on my "to read" list.