Another film coming up on UK TV that looks well worth viewing...

Cavalcanti's wartime film, based on a story by Graham Greene, still unsettles, even shocks, with its subversive, almost surreal spectacle of a cosy English village under Nazi attack in the Second World War.

Disguised as British soldiers, the invading Germans insinuate themselves into a pretty village inhabited by British character players so familiar to wartime audiences that they must have seemed like family members. Always the mischievous foreign observer, Cavalcanti kicks away their usual charm, letting them kill and be killed in a violent battle for their green, pleasant land. Critics' reactions at the time were mixed; but now we can properly relish this visionary film, as jolting and quizzical about British life as anything by Powell and Pressburger.

There's a short BFI book about it too - Went the Day Well? by Penelope Houston.....

Went the Day Well? is one of the most unusual pictures Ealing Studios produced, a distinctly unsentimental war film made in the darkest days of World War II, and nothing like the loveable comedies that later became the Ealing trademark. Its clear-eyed view of the potential for violence lurking just below the surface in a quiet English village possibly owes much to the Graham Greene story on which it is based, though as Penelope Houston shows, there remains a mystery about the extent to which Greene was actually involved in the scripting. Or perhaps the direction by the Brazilian born Cavalcanti, a maverick within the Ealing coterie, is the chief reason why Went the Day Well? avoids the cosy feel of later, more familiar, Ealing films. This is an attractive and astute view of British cinema in its heyday. 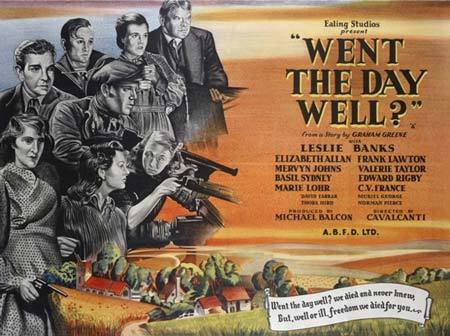 Brilliant, brilliant film. It starts off as some twee, picture book tale of English country life and ends up genuinely brutal.

I've seen it before and enjoyed and dvr'd it the last time TCM showed it. But haven't watched it again yet.

It is a brilliant film and still shocking, although part of that is that it is a film from the forties and you don't expect some of those more shocking scenes from films of that period.

Thanks CQM2. My anticipation levels continue to move upwards.


CQM2 wrote: "It is a brilliant film and still shocking, although part of that is that it is a film from the forties and you don't expect some of those more shocking scenes from films of that period."

Given the timing, and with a German invasion then a very real possibility, the filmmakers must have consciously decided to pull no punches.

Went the day well?
We died and never knew.
But, well or ill,
Freedom, we died for you.

Which puts it very starkly. Lives were going to be lost.

Churchill tried to have it banned I think.

I can't find any suggestion of that online. One source suggests the film was produced in response to perceived public complacency about a German invasion.

This article suggests Churchill wanted a film called The Next of Kin banned - it was also released in 1942 (this article also mentions Went The Day Well?)...

The Next of Kin (d. Thorold Dickinson, 1942) was one of a number of wartime features - including The Foreman Went to France (d. Charles Frend, 1942), released, also by Ealing, the previous month - to warn of the dangers of careless talk.

The film concerns a supposedly secret British plot to attack a relatively unguarded German U-boat in occupied Northern France. But the element of surprise is lost thanks to a series of reckless comments by soldiers and civilians to, or within earshot of, German spies. Although the raid is ultimately a success, the British suffer very heavy losses. The Next of Kin is unusual for British propaganda films of the period in its willingness to portray British troops suffering near defeat. Churchill was reportedly appalled, and initially wanted the film banned as a threat to morale, before eventually being persuaded of the importance of its message.

The pre-title announcement begins, "This is the story of how YOU unwittingly worked for the enemy", and the film pulls no punches in communicating its message. Particularly chilling is a scene involving a young Dutch girl who is blackmailed into revealing secrets, and endangering her soldier sweetheart, by her Nazi employer. Realising the consequences of her actions, she stabs her tormentor to death, but is witnessed by a German spy, who strikes her down before turning on the gas to give her death the appearance of suicide. This cool brutality prefigures the even more powerful treatment of similar themes in Ealing's Went the Day Well? (d. Alberto Cavalcanti), released later the same year.

Originally commissioned as a military training film by the War Office, the film was expanded to feature length for general release at the behest of Ealing head Michael Balcon, who supplemented its modest budget of £20,000 with a further £50,000 from Ealing's coffers. Despite the film's box office success, however, the studio recouped its investment but no more; under the terms of the deal, all profits went to the War Office.

I've watched about 80% of this film now. I watched it last night, once it was obvious Spain were going to cruise past Turkey (one for those watching Euro 2016 there). Anyway....

...it's tremendous. A genuine sense of threat and people getting brutally slain by the ruthless invaders. It's also a powerful piece of propaganda. I'm keen to compare and contrast it with the original Graham Greene short story, The Lieutenant Died Last, published in an American magazine in June 1940. I've discovered that it is one of the stories in The Last Word and Other Stories.

Graham Greene's story concerns a poacher, Bill Purves, a Boer War veteran, who single-handedly overcomes a Nazi attempt to invade a rural English village. But aside from the central premise of invasion and the retention of the poacher as a minor character (renamed Bill Purvis), little of Greene's story remains in the script by seasoned Ealing writers John Dighton, Diana Morgan and Angus MacPhail.

Turville in Oxfordshire stands in for Bramley End, the sort of village invariably described as 'sleepy'. True to form, the villagers take some time to wake up to the presence of the enemy among them. But when they are roused, they respond with determination, resourcefulness and, when necessary, a surprising ruthlessness.

The film is almost cruel in the way it repeatedly frustrates its audience's hopes. After the Germans' merciless extermination of the village's small platoon of home guards, the villagers make a number of attempts to summon help.

The first occurs when land girl Ivy (Thora Hird) and her friend Peggy (Elizabeth Allan) smuggle a message written on an egg to the visiting delivery boy. Almost immediately, the eggs are broken when the boy is knocked off his bike by Mrs Fraser's (Marie Lohr) visiting cousin Maud (Hilda Bayley). When Mrs Fraser slips a written message into Maud's pocket, she absent-mindedly uses the note to steady a rattling car window; it is dislodged and eaten by her dog.

Most extraordinary is a scene in which the postmistress (Muriel George) throws pepper in the eyes of her unwelcome lodger, then finishes him off with an axe. Shortly after, when her telephone call for help is ignored by a gossiping switchboard operator, she meets her own end, on the blade of a bayonet.

I've finished it now and can confirm that CQM2 is quite correct....


CQM2 wrote: "It is a brilliant film and still shocking, although part of that is that it is a film from the forties and you don't expect some of those more shocking scenes from films of that period."

Well worth watching. A simplistic but effective piece of wartime propaganda with a strikingly dark interpretation of what happens when strangers enter an English pastoral paradise.

I've got hold of the original Graham Greene short story & will report back.