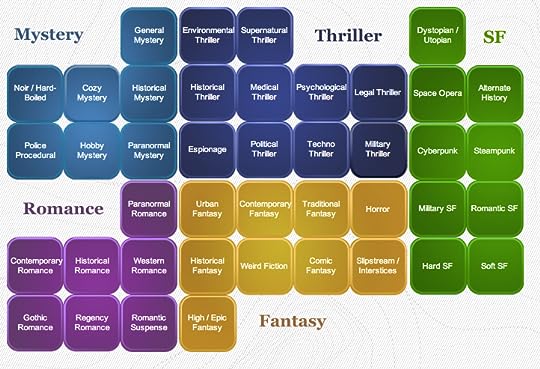 I saw this posted on Book RiotBook Riot a few days ago and thought it was an interesting breakdown of subgenres in literature.

If you go to the source website Book Country, the book map looks a little different but you can click around and see descriptions of the subgenres.

I thought this was really interesting and extremely useful! I often read a book and think, "well, how would I categorize that?!?" This helps!

I like it a lot. If I list the main category first with the subgenre second on my shelf, it would be very easy to find everything.

What's the difference between traditional fantasy and high fantasy?

If you click in through the website link, there is a lot more information and description of the subgenres.

The website says that high fantasy is, "High/epic fantasy works are set in a secondary world and have a complex and sweeping plot. Narrative usually involves detailed world building, warfare, the rise and fall of kingdoms, as well as a much larger cast of characters than traditional fantasy books. Setting is often redolent of medieval Europe.

Because of George R.R. Martin's series A Song of Fire and Ice, the genre has gained in popularity in the last few years, with a tendency toward the dark and gritty. A celebrated recent title in that vein is Prince of Thorns by Mark Lawrence."

And it says that traditional fantasy is, "Traditional fantasy is a broad fantasy category that describes fantasy works set in a secondary world, involve magic, and have a plot that is smaller in scope than that of high/epic fantasy. The narrative usually revolves around a single person or a small group of characters with a clearly defined objective.

I like the Book Country "map" version. I don't like the one above. The squares make it seem like it's a continuum of something, like more realistic towards the bottom. It bothers me that they aren't organized in systematic way. Or am I missing something?

Jennifer wrote: "I like the Book Country "map" version. I don't like the one above. The squares make it seem like it's a continuum of something, like more realistic towards the bottom. It bothers me that they aren'..."

Nope, to each their own. I like this one because it shows the subgenres without having to click on anything extra or hover your mouse over a portion of the map. Plus, I love things that are measured and even! lol.

I do like the map on the website though, I actually think that it is new because it wasn't there a few days ago when I first came across this article; before, the website also had the above periodic-table-of-the-elements style map on it.

I think that is why I like the map above. I love chemistry and get warm and fuzzies at the thought of the periodic table of elements :)

I just noticed that the website does have nonfiction and young adult, while the image above is really just the fiction subgenres. And the subgenres of the subgenres.

OMG! And I just realized that the little sections of the map on the website are pictures that represent the subgenres! That definitely raises the coolness factor.

I'll stick with the Book Riot posted above - clean and to the point.

Why didn't the put Western as the most Western part of the map!? Lol.

A periodic table is organized that way based on characteristics of the elements. This is randomly put together.

It is just a tool to better understand book genres and sub genres, not explain complex scientific interactions! Lol.

If you like the other, graphic map, that is absolutely fine. I was just explaining what appealed to me about this one.

I saw it on Book Riot too Nicole and liked it, particularly after our discussion about what constitutes sci fi the other day.

Susie wrote: "I saw it on Book Riot too Nicole and liked it, particularly after our discussion about what constitutes sci fi the other day."

That is what made me think it was particularly timely too, Susie!

Hmm, I wonder how hard core fans of any one of these areas would view these, and how opinions would vary even within those groups.

While it's quite interesting and must have taken a lot of work and figuring out, I felt that on the second one, nonfiction was not well subdivided; there are more than those 3 subdivisions. But at least it was represented :).

I think they just expanded it to include nonfiction and YA and they comment that it is a work in progress. Hopefully they will add more!

Nicole wrote: "I think they just expanded it to include nonfiction and YA and they comment that it is a work in progress. Hopefully they will add more!"