A movie about the First World War based on a stage musical of the same name, portraying the "Game of War" and focusing mainly on the members of the Smith family who go off to war. Much of the action in the movie revolves around the words of the marching songs of the soldiers, and many scenes portray some of the more famous (and infamous) incidents of the war, including the assassination of Archduke Ferdinand, the Christmas meeting between British and German soldiers in no-man's-land, and the wiping out by their own side of a force of Irish soldiers newly arrived at the front, after successfully capturing a ridge that had been contested for some time. 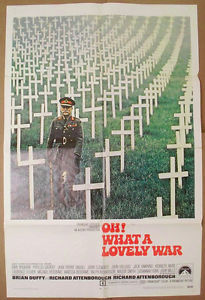 I'm enjoying Oh! What a Lovely War (1969) having watched about half of it. It's very stylised and a bit dated, but also very inventive and irreverent, whilst making some powerful points about the more absurd and tragic elements of WW1. I recommend it.

I first saw this musical when I was at secondary school; the sixth form put on a performance of it, and I immediately became obsessed with the history and the stories of the Great War.

I saw the 1969 film much, much later. I agree with you, Nigey, it is very stylised, but I think that that in itself makes it a bit of "history within history". I need to watch it again, but as far as I can remember, it takes place in a typical British seaside town (Brighton? Eastbourne?) - places which were already beginning to lose the glamour they had had in the 40s and 50s. For contemporary viewers at the end of the sixties, that must already have hinted at misplaced or ill-judged thrills, just like those of the young men who clamoured for adventure in 1914. I'll try and watch it over the next few days to refresh my memory, but I'm glad you've brought it up - very discussion-worthy!

Also, if I remember correctly, the sainted Maggie Smith has a rather fabulous cameo.

It is stylised, but I was reminded of it when I saw the Keira knightly film...forgotten the name...: )

Anna Kerenina! The process and feel of it is done in a similar vein.

The theatrical nature of the film may have something to with as you said Nigeyb that it was a musical/play. This article is quite interesting about it.

Not a film I'm fond of. I think it tells you much more about 1969 than it does about 1914-1918 which is fair enough, but lots of people have seen this and things like it, such as Blackadder Goes Forth, and think that that is how the First World War was. When you read the actual history, often it wasn't.

Some aspects yes, some no.

Have a look at this quote:

'Eight weeks later, Littlewood, Melvin and the playwright Shelagh Delaney went to Oxford to hear a lecture by the historian AJPTaylor. "Oh,What a Lovely War," he declared, "does what the historians have failed to do." It was, he said, "a striking demonstration of what the war was about. Indeed, it occurred to me after I had seen it to wonder how much historians were to blame for the fact that one has to go to the East End of London to get a lively interpretation of this difficult subject."'

The above comes from this article:

Here is an interesting article and commentary on Blackadder and our possible future Prime Minister...

These films and programmes are an interpretation. Not history! History itself is an interpretation. Unless you were there, you are regurgitating what someone else knows, has discovered or read about. Witness accounts are not always reliable, sadly. The Twelve Angry Men is a very good example of this. : )

I think the writers of Oh What A...were brave to have put it forward. It makes people think differently about an important time in history. Whether you think that war is good or bad.

John Mills and Dirk Bogarde served during WW1. Even though they had little experience of WW1, WW2 would be quite raw, hence the doubts about war.

Roisin wrote: "Some aspects yes, some no.

Have a look at this quote:

'Eight weeks later, Littlewood, Melvin and the playwright Shelagh Delaney went to Oxford to hear a lecture by the historian AJPTaylor. "Oh,Wh..."

Oh! What a Lovely War takes its cue almost entirely from A.J.P. Taylor's 1963 The First World War: An Illustrated History. But that is not good thing as Taylor's book is now largely disregarded by historians. His thesis - namely that everybody involved in the war except for Lloyd George, Foch, and Ludendorff, were complete idiots - has been confined to the scrapheap by better scholarship.

I agree that it is interpretation and not history, as I say, my issue is that too few people make that distinction. I don't think that anyone thinks the war was "good", by the way, though there are many who feel that, horrible though it all was, it was necessary.

The First World War: An Illustrated History (other topics)