Mod
A branch of the caves affectionately named for the bioluminescent bugs and moss clinging to the ceiling. 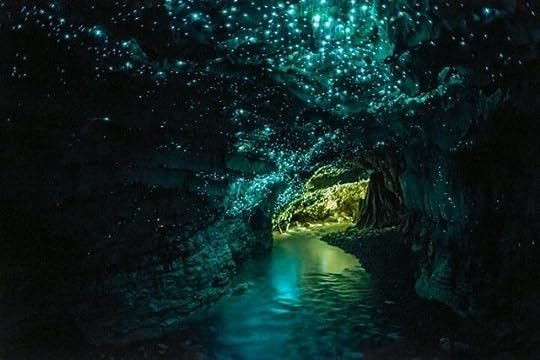 Jordan smiled as he broke into the Star Chamber, it had been a nice day and he had convinced Adeline to come with him, it had been a nice day and he told her that he was planning to go to the Star Chamber with the glowing moss. He has been attempting to make her a little more bold in her actions, as they were walking he just told her about the caves and where tunnels went and answering any questions she had. The Star Chamber was a beauty to behold as he looked at it with a smile, he has come here many times and it always still amazed him. The way the water reflected the lights was truly spectacular. He turned towards Adeline with a smile "We are here at last, sorry it took a while" He told her.
He knew Adeline through her adopted father, though not that well, what he did knew was that she had a reputation to be overly cautious if not a straight coward, though she had frequently said otherwise, her father asked him to try and help her be a little more willing to take risks and open to acting boldly. He dipped his feet into the water and waited for Adeline to catch up and say something as he enjoyed the feeling of the cool underground water

Mod
The soles of her shoes were silent against the damp cave floor as Della followed behind Jordan. This wasn't how she had seen her day going at all. Emmett had easily found her working in the greenhouse the day before and asked if she would like to accompany him to explore the Twister Caverns. While she enjoyed spending some free time exploring the Valley, the caves were not a usual part of her itinerary. As a girl, Emmett had decided not to take her because of the child's dislike of the dark and the eerie echoing sounds filling the space. As she got older, Adeline never took much interest in the caves, always turning back when she lost sight of the entrance. She wasn't a fool, she didn't know how this system worked and it would take ages for her to get out of the dark caves if she got lost.
Then Emmett told her this morning that he couldn't take her to the Caverns. One of his friends working maintenance that day had grown suddenly ill with a bout of the stomach flu and Emmett had volunteered to take his place. He insisted, however, that Adeline still go to the caverns with Jordan. While she trusted Emmett after years of living under his care and understanding his complete knowledge of the caves, she didn't trust Jordan quite as much. Despite living under the same roof, they had never interacted much. But Emmett promised her that if she didn't have a good time, he would clear an entire day to help her with whatever she needed in the greenhouse. Begrudgingly, she agreed to follow Jordan out to the caves so she could see this Star Chamber she had heard so much about. She had never seen much bio-luminescence outside of the lightning bugs that frequented the Valley during the summer. When they finally arrived, she wasn't disappointed.
"That looks like foxfire... but I didn't think it would be this blue," she mused, stepping past Jordan to get a better look. she had never quite seen anything like it, and she only broke her gaze from the ceiling when her left foot became submerged in chilly water, causing her to jump back in surprise.

Jordan bursted into laughter at her jump back, looking away from her quickly trying to hide it and muffle the sound, behind his giant hands and go to a more relaxed form but it was too late, his deep voice echoed in the caverns. His face grew red in embarrassment and he quickly tried to recover, lifting his feet from the water and turning to look at her, still looking at her he stammered slightly "Umm sorry about that, was just a little funny" He told her getting up and looking at her, he then coughed and tried to go back to a normal conversation before he got into trouble.

"Anyway this moss only grows here so sadly you can't grow any sadly" He told her while walking forward to brush his hands against the moss "It is perfectly safe to touch by the way" He added, trying to get her to forget about what he just did "I personally consider it the most beautiful part of the valley and I come here often to relax and relax" He told her, he remembered the first time he found it, back when before he felt this place became his home, he went into the Carverns to be alone and explore like he normally did back then alone to get away from everyone, on this trip he got lost and found his way here, staring at its wonder and glow, looking like some mystical substance he had learned in his folk songs, he still believed that their was something magical about the moss despite what others think and told his about it being completely naturally. Jordan looked at her with a small smile "Foxfire is a nice comparision, though I prefer to compare them to stars" He added to start a conversation

Mod
Della's eyes narrowed marginally and the corners of her mouth slanted downward at the sound of the resonating laughter filling the chamber. Her pride had her wanting to defend herself venomously, arguing that being surprised by a suddenly wet foot was nothing to laugh about, and if he had been a good guide, he would have warned her, but Adeline refrained, though she was hardly pacified by his apology. She chose, instead, to simply forget about it, though the squelching of her shoe with every step was a not so subtle reminder.
"How do you know it only grows here? Maybe it only naturally grows here, but it could be supported by another suitable environment," Adeline thought aloud, already trying imagine how she might replicate the cave wall somewhere else in the Valley, preferably in the greenhouse. Carefully stepping along the edge of the water, she tried to inspect the ceiling a little more closely. squinting through the darkness, she was able to see something moving among the moss and realized that there were little glow worms clinging to the surface. After a few moments more she saw they were accompanied by lit up millipedes, causing her nose to wrinkle. Long, wriggly things that moved too quickly gave her the creeps. Millipedes weren't quite as bad as snakes, but they certainly weren't her favorite creatures.
"I've only ever read about foxfire, almost everywhere it is said to glow green... I have no idea what this stuff is." Adeline glanced over at Jordan upon hearing his nostalgic comment. "I would prefer to look at actual stars. I would probably start to get claustrophobic if I spent too much time in here." Open spaces were much more to her liking. Sure there wasn't an abundance of strange, glowing moss, but there was also better airflow and less of a chance of their being a cave in or getting lost.

Mod
((Did you post something and then delete it? Because I got a notification but found no comment))

((Accidental post of unfinished rp post, nearly finished it by the way, sorry for taking so long))