A 33-foot bronze sculpture of a nude pregnant woman with an exposed fetus, skull and tissue is upsetting some people in a ritzy Long Island village, causing children to have nightmares, the mayor says.

Mayor Fred Carillo told NBC 4 New York that several people had written letters about the statue. Parents told him kids could see it from a passing school bus and were terrified.

"The residents were upset that the children in the area could see this," Carillo said.

The mayor said Rosen has been amenable to adding landscaping around the statue to better conceal it, and is working with the town to come up with a solution. In the meantime it has been covered with a black tarp.

Officials say the village has strict rules regulating easements, and the statue was installed without proper permitting and architectural board approval. The statue previously sat in the courtyard at Lever House in midtown. 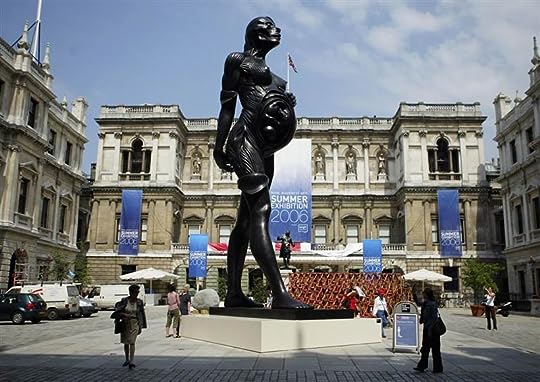 Goodlord. They commission Damien Hurst and are surprised to get something that upsets their tender sensibiities? Where were their heads?

Jim wrote: "Now they know where babies come from...."

Damien Hirst statues? That IS terrifying.