It's the mind that counts

Mod
I remember the fire, the demons, and the screaming of souls. I couldn't help them for he had me tied down. I saw him sharpening his dagger as I fought the ropes, but it was no use.
I trusted this man and he betrayed me. He claimed to be in love with me, but I know now that it is just an obsession.
He turned to look at me and gave a dark grin. "You know I'm only doing this to help you, right?"
I just stared into his pitch black eyes. He was one of them. There was no getting him back now.
"Alright, then lets get started." He drew the dagger away from his side and started to cut across my forearm, but I didn't scream. Even as he made more and more cuts across my body. He would not get the pleasure of hearing me scream.
He gave a knowing smile and then positioned the dagger across my stomach. As he drew the blade across my stomach, I couldn't hold it back anymore. My scream tore through the room like wildfire. I heard him give a small chuckle.
"There it is. That beautiful scream." This man was sick.
I only had a few seconds to ready myself before he drew the dagger across my stomach again. He was only making slices, nothing too deep because he wanted me to feel pain. He wanted me to live through every agonizing moment.
Once the third slice was made, my mind drifted into the darkness. 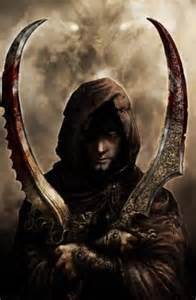 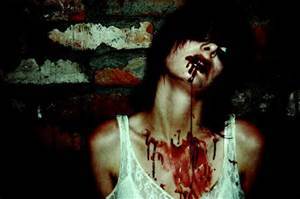 Mod
I woke in a pool of my own blood. Was it over? Probably not. I didn't dare look down at my body for fear of what I would see. Or what I wouldn't.
I let my eyes travel around the room. The man whom I so blindly trusted was nowhere to be seen. Until I saw a hand peaking out from behind the stone table. My mouth dropped open as I took in the sight of him on the floor. Dead. Who had killed him? Would they kill me?
As soon as I had the thought, I saw a cloaked figure come out of the shadows and walk towards me. As he slowly made his way to her, an unfamiliar feeling came over her. Safety.
He removed his hood and she saw the silver hair, but what drew her attention was the purple eyes that captivated her. Before she got too lost in his eyes, he dropped her gaze.
"Who are you?" She asked him.
"That does not matter at the moment. Right now we must get you away from here. Can you walk?"
"I'm not sure."
She saw his gaze roam over her body. He was assessing the damage. His jaw tightened as he took in the cuts on her stomach.
He put one of his arms underneath her legs and one behind her and then lifted her as if she weighed nothing.
His scent was a mix of pine and winter. Drowsiness threatened to overtake her, but before it did she said, "Thank you for saving me, but I'm afraid I'm not worth the energy."
Just before she went unconscious she heard his velvet voice say, "You will always be worth it."

Mod
I awoke in my own bedroom. The blood was washed away and she was dressed in a nightgown that fit her like a glove. Who had changed her into this? Probably her lady in waiting. She relaxed at the thought.

I was dressed in a black gown and corset. My hair was down as usual but I could see tiny tendrils of red mixed in with the black.
I looked in the floor length mirror that sat in the corner of the room. Bruises lined my right cheek, my arms had a few scars on them, my whole body was battered. I didn't even look at my stomach when I changed into the gown. I put on elbow length black gloves to hide most of the damage and wrapped a silk scarf around my shoulders to hide most of the damage.
As I walked into the hallway, I held my head high as each servant I past looked at me with a curious expression. Probably all wondering where I had gone.....good thing my Elite kept it a secret.

Helia swirled her fingers, creating several demons and blowing them into Aelin. Maltra slammed the wooden door down, but it was too late. Helia giggled and waved goodbye as she teleported away. Maltra swung out his sword and rushed to the man left. He pulled out a bloody torture device, a smile placed on his face. Before he could even do anything with his weapon, Maltra swung his sword violently in the air and across his neck. He was still smiling as his head fell clean off and his body collapsed. Maltra strolled to the queen and narrowed his eyes. Pathetic. He removed his hood, and bit his tongue as he approached. She stated intently at him, like he was a god. He looked away. "Who are you?" She asked.
A typical question. Maltra wanted to walk away. Pfft. Queen's assassin. Like she would ever use him. "That doesn't matter at the moment. Right now we must get you out of here. Can you walk?"
"I'm not sure."
Of course. It was like a princess in need of a knight, except she was a queen and... He was a freaking assassin! He should kill her right now. He would be hunted down for a crazy price. He would have to go to Crimson Burn, however. He skimmed over her, brow furrowed. He picked her up and headed out the broken down door. "Thank you for saving me, but I'm afraid I'm not worth the energy."
She turned drowsy, not catching his roll of the eyes. If he was going to be the knight in shining armor, he should might as well play the part. "You will always be worth it."
Back then, he had only half meant it.

I bowed my head as I fell to my knees. He was gone. My love was gone.

The moonlight illuminated the forest around me. It would have looked magical, if I hadn't been as sad as I was at that moment. I closed my eyes and raised my head to meet the moon. "I guess you know how I feel, friend. The Sun died for you everyday so you could be the light in the darkness...but you can never meet him, but once in a while."

Tears slipped down my cheeks. "The heartbreak is harsh. You of all things would understand that," I opened my eyes and stared at the moon.
I could finally accept that I am broken...and no one would be able to fix me. 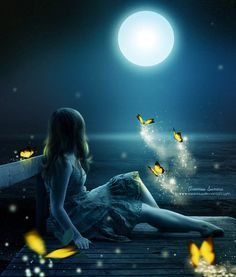 Mod
wow what? Wow as in "OMG THAT WAS AMAZING!" or wow as in "Wtf just happened?"

Mod
Wow as in OMG THAT WAS AMAZING!!!