I had to keep the gifs here, they make me happy~ XD
(hide spoiler)] 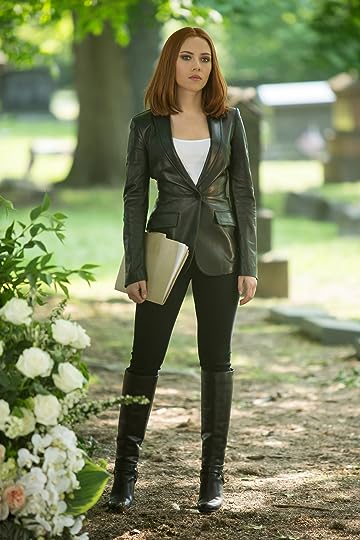 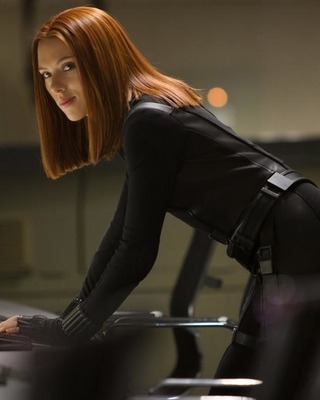 Age: 86
History: Originally trained as spy and assassin for the Soviet Union Natasha was obviously wanted by many countries for her skill and expertise. She's been captured many times, mostly getting herself out, but she's also been helped by Wolverine or Captain America a time or two. She escape to America with Clint Barton and now works with the Avengers, and specifically for Nick Fury himself. Recently she's broken up with her long time lover and friend Clint, to look for more interesting endeavors.
Traits:
- Secretive
- Serious
- Flirtatious
- Smart
- Skillful


Age: 90
History:Steve Rogers was born July 4, 1920, to poor Irish immigrant parents, Sarah and Joseph Rogers. Rogers grew up a frail youth during the Great Depression in America. Little else is known about Rogers' early life other than the fact that a strong sense of duty, honor, and humility was instilled in him; perhaps due to his Irish Catholic upbringing. Rogers' father died when he was a child and his mother died from pneumonia later, when he was in his late teens.

Becoming America's Super-Soldier
Horrified by newsreel footage of Nazis ransacking Europe and atrocities in Asia that the Empire of Japan committed in China and Korea, Rogers tried to enlist in the Army but was rejected as 4-F because of his frailty and sickness. Overhearing the boy's earnest plea to fight for his country, General Chester Phillips, of the US Army, offered Rogers the opportunity to take part in a top-secret performance-enhancing experiment called Operation Rebirth.

Rogers agreed and was taken to a secret laboratory in Washington, D.C., where he was introduced to Doctor Abraham Erskine (code named Professor Joseph Reinstein), the creator of the Super-Soldier Serum. After weeks of tests, Rogers was at last administered the Super-Soldier Serum. Given part of the compound intravenously and another part orally, Rogers was then bombarded by vita-rays, a special combination of exotic (in 1941) wavelengths of radiation designed to accelerate and stabilize the serum's effect on his body. Steve Rogers emerged from the vita-ray chamber with a perfect human body. A Nazi spy, who observed the experiment, murdered Dr. Erskine mere minutes after its conclusion. Dr. Erskine died without fully committing the Super-Soldier formula to paper, leaving Rogers the sole beneficiary of his genius.

Rogers was then put through an intensive physical and tactical training program that taught him gymnastics, hand-to-hand combat from Colonel Rex Applegate and William Essart Fairbairn, and military strategy. Three months later, he was given his first assignment: to stop the Nazi agent called the Red Skull. To help him become a symbolic counterpart to the Red Skull, Rogers was given the red, white, and blue costume of Captain America.Rogers was also given the cover identity of a clumsy infantry private at Camp Lehigh.After successfully becoming Captain America, Rogers was later submitted to an experimental mind-conditioning program that conditioned his mind to accept false information in the chance he was captured by the enemy and forced to reveal classified information. As part of the conditioning, Rogers believed his real name to be Grant Rogers, that he had a brother, and that due to his parents being diplomats, he had a casual upper class appointment to the Army and Captain America position. It would not be until far later in life that Rogers would recall the conditioning and his true history.

Rogers was originally issued a traditionally "kite" shaped shield made of mundane steel, as well as a sidearm. Cap's original helmet served as a mask and was separate from the rest of his costume. This proved a problem as in one early outing it was nearly knocked from his face via the hard wing emblems, almost revealing his identity to an attending newspaper reporter with a camera. Adding a protective neck-plating hood to his costume, rather than his separate mask, solved this problem and afforded Rogers more protection. President F.D. Roosevelt later presented Rogers with his now-legendary disc-shaped shield. Discovering that its excellent aerodynamic properties made it an effective offensive weapon, Rogers abandoned his sidearm.During the war, "Cap" served as both a symbol of freedom and America's most effective special operative. In addition to working with his young sidekick Bucky, Cap regularly fought alongside other Allied super-powered heroes such as Namor the Sub-Mariner and the android Human Torch, who were the recognized core of the World War II super-team known as the Invaders. Rogers sometimes came into contact with a Canadian paratrooper named Jim Howlett, the man who would come to be known as Wolverine.

Rogers faced fascist Germans and imperialist Japanese. Among his foes and adventures were battles with George Maxon, who was an impostor Red Skull, the White Death, the Legion of Unholy Beggars, the Dragon of Death, the Reaper, the Black Toad, the Black Talon, Stryker, Doctor Crime, Mock Mikado, Master Man and the Super-Axis, Togaro, Prophet of Hate, Agent Axis, the Shark, the Hyena, N2 and Mister Sinister, Dr. Togu, Doctor Destiny, Snapper, Jack the Ripper and Terdu, Dormammu, HYDRA, the Hand, the Grandmaster, the Ringmaster, Baron Zemo, Colonel Von Wagner, Fang (who later died in Hiroshima and thus became one with the Everwraith), and the Butterfly. He also prevented the murder of President F.D. Roosevelt by a group called the Defenders, the Battle of the Bulge, D-Day, stopping saboteurs (early March 1941), meeting Wakandans, saving President Roosevelt from a deranged Namor, meeting Nikola Tesla, saving a Manhattan Project scientist from Red Skull with the help of the Howling Commandos, stopping (with Howling Commando support) the Red Skull's plot to deploy a centuries-old automaton designed by a time-traveling Doctor Doom, facing the Red Skull in a hover device, scuffling with fellow Allies the Crusaders, fighting alongside the French Resistance and Peggy Carter (an American who had fallen in love with Captain America), almost accidentally slaying a war orphan, saving Michael Kramer from the Red Skull. In April 1945, Rogers stormed the Red Skull's bunker, with Red Guardian, Patriot, and Spirit of '76, in his last WWII battle with Red Skull.

For a time, World War II Bucky fought alongside a time-displaced modern-era Captain America until the Avengers recovered their colleague to the present day.

Natasha slipped out the side of the helicopter and threw the headset to the pilot before he lifted back up into the air. "I swear if Fury doesn't have something interesting" she started, but didn't finish the sentence as she opened the door on the roof that led to the staircase. Fury had gotten just finished his renovations on the new Shield building, this time there would be no screwing around with anyone he didn't trust. She hurried down the stairs until she came to an inky black door with no windows, the rest were the same colour, but had a window through to the other side. Touching her ID to the scanner she waited a few seconds before hearing the soft click, she opened the door and headed down the long hallway to Fury's office.

Captain America waited outside Nick's office for Natasha to arrive.He didn't want to be there...He could be doing something better with his time like for example searching for Bucky. Bucky saved him and that meant he wasn't not completely lost. He was told to stay put because like Fury put it 'There was better things to do with his time then looks for runaways' Not that Captain was going to stay but he needed help.Natasha would most likely go with him.

"Rogers." Natasha said and nodded toward him with a slight smirk, she kinda felt sorry for him, with the Winter Soldier business and all. She opened the door to Fury's office and said loudly "Fury, what do you need?" Nick Fury stood as they entered the room and crossed his arms, "I'm surprised you actually came." he said to Steve, his single eye staring him down seriously.

"Well to be honest I didn't really want to be hero but duty calls" he said seriously back at him.There was one difference from him them most heros.Captain was loyal no matter what...unless of course you went evil then may God have mercy on your soul for you would be in trouble.He looked over at Natasha scanning her body.

"Yea what he said, duty calls." Natasha rolled her eyes and sat in one of the chairs in front of Fury's desk, or more like landed in it. "You're going two are going to retrieve something for me, from what I've heard it's in the everglades." he said, obviously not disclosing any information they didn't need to know.

"Great,So anything else or can we be dismissed?" Cap asked as he stood up quickly looking over at her.He was glad to be working with her again.He felt lonely lately since he spent most of his time along searching for Bucky and doing research to find him...even asking around to people who may have seen him.

"Yes, this is what it looks like, don't get eaten by an alligator." Fury said holding out a folded up piece of parchment paper that felt like it was probably one hundred years old. Natasha swiped the paper and unfolded it before he could take it, on it was a 2D drawing of a stone circle with a rune on it. "What is it?" she asked, but with one look from Fury she shut her mouth and folded the paper back up. "Agent Hill is waiting for you at a safehouse half an hour west of Miami."

(view spoiler)[Rune on the circle 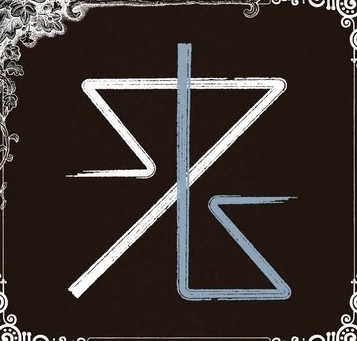 Steve looked over at Natasha wondering if she could might going for a little 'detour' from this mission to help him look for bucky.There was word from a few agents that he was spotted at a lumber mill running from a pack of heavily armored soldiers.It worried him on what kind of trouble he could have found himself in.Was hydra still after him?

"Fine. Come on Rogers, let' go see what chaos we can cause in Florida." Natasha said tucking the paper into a pocket carefully, then with a soft swing of her hips she sashayed out of the room and toward the elevator.

Steve looked at fury one last time before following after her.When they got out of ear shot he said."Glad we could be working together again,we do this work good together" He said laughing.