This topic is about K.Z. Snow
7 views
New releases > Machine by K.Z. Snow

As Fanule—de facto mayor of Taintwell—regains control of his mind, he must solve the mystery of the Spiritorium. 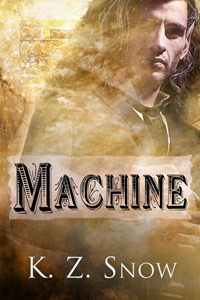 The closing-day flea market at the Marvelous Mechanical Circus always draws a colorful crowd, but salesman Will Marchman doesn’t expect to see a large, elaborate gold wagon on the plaza—especially one called the Spiritorium. The wagon’s exotic looking owner claims he can perform “cleansings and siphonings” via a miracle-working machine housed within. He can supposedly flush the wickedness out of people and places.

The Spiritorium appears in the Mongrel village of Taintwell the next day, setting off a potentially tragic chain of events that begins with a shocking revelation. To make matters worse, Fanule Perfidor, de facto mayor and Will’s lover, has been neglecting to take the tonic that stabilizes his moods. Besieged by his illness, Fan drives Will away. Then Fan’s best friend, vampire Clancy Marrowbone, vanishes, causing a rift between him and his mortal lover. Then Will disappears.

As Fan regains control of his mind, he knows what he must do to save his village and the people most important to him. He must solve the mystery of the Spiritorium and confront a man he’d hoped never to see again.

Got it!
Yay!
Looking forward to read the last book of this series!
<3 Fanule