The Forbidden Forest, also known as Dark Forest borders the edges of the Hogwarts School of Witchcraft and Wizardry grounds. As its name suggests, it is strictly off limits to students - except in the case of detention, or Care of Magical Creatures lessons that occasionally take place there. Of course, with the various dangerous creatures living in the Forest, few students would even want to venture into it. Black flowers are known to grow in the forest. 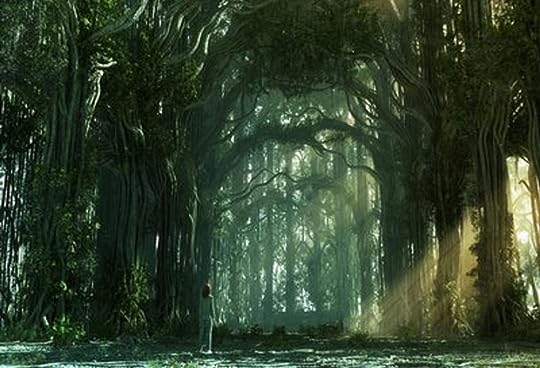 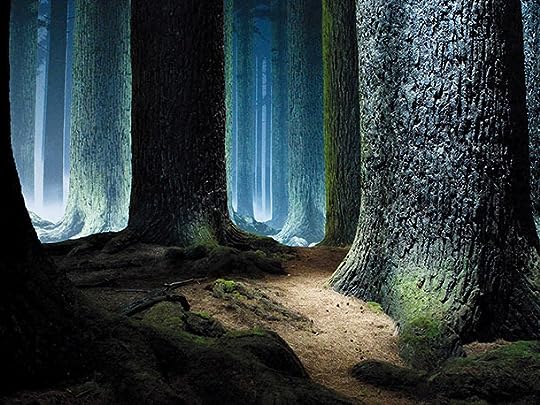 The Forbidden Forest houses or has housed any number of magical creatures. A few known examples include:

*An Acromantula colony, once led by Aragog, then the Death Eaters forced the remaining colony to assist them during the Battle of Hogwarts.

*A colony of centaurs, including Bane, Magorian, Ronan and Firenze.
*Herds of unicorns, hippogriffs and thestrals.
*A pack of wolves descended from two werewolves mating at the full moon.
*Grawp, an undersized Giant and Rubeus Hagrid's half-brother, who was moved by Albus Dumbledore to a cave in the mountains surrounding Hogwarts.
*Fluffy, a massive, three-headed dog who was released into the forest after serving as one of the guards to the Philosopher's Stone during the 1991–1992 school year.
*Blood-Sucking Bugbears
*Bowtruckles
*A Blast-Ended Skrewt who survived the third task of the Triwizard Tournament was also released into the forest.
*It is also rumoured that many other types of creatures reside there including trolls and a few giants, though of the last, Grawp is the only known example. (However, Forest Trolls have also been seen in the Forest.)

*Although not technically a "creature", an enchanted and somewhat sentient Ford Anglia, once belonging to Arthur Weasley, took up residence in the forest after crashing into the Whomping Willow in 1992.

Towards the end of 1997, while Harry, Hermione and Ron were camping out during their search for Voldemort's Horcruxes, they overheard Ted Tonks, Dirk Cresswell, Dean Thomas, the goblins Griphook and Gornuk discussing Ginny Weasley, Neville Longbottom and Luna Lovegood getting caught trying to steal Godric Gryffindor's Sword from then-Headmaster Severus Snape's office, and being forced to serve detention with Hagrid in the Forbidden Forest; while Griphook was under the impression that this was a "cruel" punishment, it was undoubtedly Snape's way of sparing the students a far worse fate at the hands of Alecto and Amycus Carrow.

On 2 May, 1998, a great battle occurred within the Castle and on the grounds of Hogwarts School of Witchcraft and Wizardry. The Forbidden Forest served as the temporary hideout of Voldemort and his followers. A horde of Acromantula emerged from the Forbidden Forest and climbed into the walls of the Hogwarts Castle.

When Harry later learned he had to die for Voldemort to regain mortality, he headed in to the Forbidden Forest and, using the Resurrection Stone, called his parents, James and Lily, his godfather, Sirius Black, and his close friend, Remus Lupin, to give him the strength to face Voldemort for what he believed would be the last time.

Harry dropped the Resurrection Stone near the Acromantulas' hollow in the Forest, and he had no desire to ever go looking for it. The stone was pressed into the ground by the hoof of one of the centaurs who joined the battle against the Death Eaters, and thereafter became buried, likely never to be found again.

Evan walked into the Forbidden Forest. He made sure he wasn't followed. He could handle anything he found in this forest and had a few friends amongst the centaurs that roamed here. He needed to be alone for a while and walked a little deeper into the forest. He sat on a tree and started drawing in hi sketch book. He saw a herd of unicorn run by his tree not really startled as he had been in the Forest many times before.

Mod
Axel was forced to leave work at the Three Broomsticks after hsi encounter with Aspyna dn that Stefan guy. Stefan was a Dumbledore and he ahd no liking for the guy anyway. Only because he was pretty much growing a relationship with the Maxime Head Girl. He knew so mucha botu ehr now...so amny of her secrets and she knew one fo si greatest abotu being a werewolf. As he walked a unicorn herd rushed past. He admirred their beauty especially a young foal that was spotted grey and white. a rare occassion when a unicorn mates with a regular horse produces such odd amrkings apart formt eh normal solid white. He wasn't paying attention above him, but eh needed a place to release stress. A safe palce incase he provoked a shift.

Evan heard footsteps and drew his wand. Usually when you heard footsteps in the Forbidden Forest it wasn't good. He looked down and saw Axel. He put away his sketch book and dropped down from the tree. "Hey Axel." He said. He knew why Axel would be out in the forest but he still didn't expect it. "Not often I find someone else roaming the forest." He said.

Mod
Axel jumped back and one could have sworn hsi eyes looked black almost when he jumped back in surprise..."Oh, hey Evan...I figured youw ould be in Hogsmeade the whole school is there today." He sya stryign to control his breathing and hsi heartbeat becuase he knew none of this was going to be good if Evanw as around when Axel shifted by pure rage.