"Hundreds of seats were raised in stands around the pitch so the spectators were high enough to see what was going on. At either end of the pitch were golden poles with hoops on the end."
—The Quidditch Pitch

Hogwarts has its own Quidditch pitch where Quidditch teams could practice, hold try-outs and play matches against each other. Each year will see a total of six inter-house matches (each house competing for the Quidditch Cup), along with numerous training sessions by each house team. 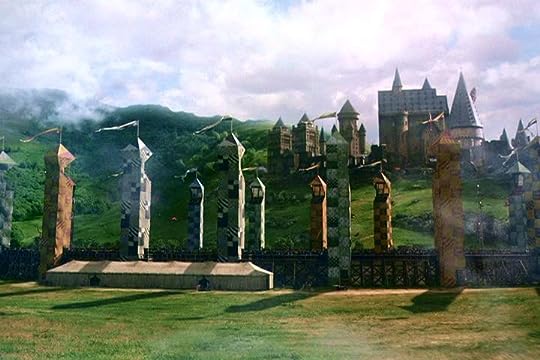 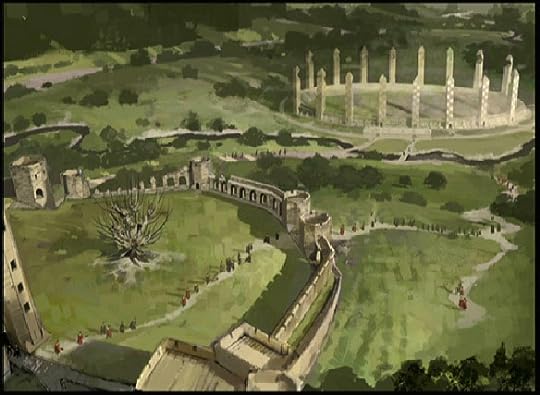 Mod
Axel stepped out onto the pitch after leaving the locker room dressed in shorts and pads and no shirt. He had his Firebolt 2200 which was the latest and fastest edition tot he Firebolt collection, perfect for a seeker. He came out here to clear his head alot thinking of hsi past and his secrets and anything really. When he was on his broom high above the pitch he felt free form stress and judgement. Even as a popular guy he still held insercuities and he lsot them in the clouds up here. Taking a few laps he at last hovers a bit and just breaths for a bit. High above the pitch he was non existent to anyone and anything around him. There was luck to free Sundays and even having a job didn't make things any better. Given some days out fo the week to work at the Three Broomsticks.

Normally, Vivian wasn't one to fly on school grounds. Or at least, she wasn't one to fly on school grounds during the day where others could see her. It wasn't that she was hiding her abilities, it was simply that she didn't want to be heckled about why she didn't join the Vulchanova team. Still, she needed to fly. That's why she was out at the field. Since it hadn't been scheduled by any of the teams, Vivian didn't really expect to see anyone here and when she first stepped onto the pitch with the newest Nimbus in hand she didn't even see Axel. He was simply too high up in the air for her to make him out. In fact, it wasn't until she had mounted her broom and soared up into the air, narrowly avoiding hitting him that she even took notice of his presence in the sky.

Circling in the air and turning to look at him she smirked, "Good to see you practicing Ax, You need all the extra practice you can get." Not that Axel was a bad flier, he was actually pretty brilliant, but hey.....too much practice never killed anyone.

Mod
Axel gave a kind nod as he soared around even with her level, "Yeah thanks, but that doesn't explain what you're going to accomplish." He couldn't help but wonder why she never wanted to be on the team academics were good yeah, but everyone knew that the quidditch team whether they were good or not normally got cut a bit of slack.
He pulled out his white feathery looking wand and shot a hard bolt down to the ground where the small figure of a box could just be made out. In an instant bludgers came flying out and soaring around the ring nearly knocking them both from their brooms were they any closer. "Accio Quaffle." He says as the quaffle flies into his hands. Placing his wand back into it's holster on his thigh he looks at Vivian, "Care for a quick game?" He offers kindly. "I like releasing all the balls to keep me on my toes." He looks over the pitch for a moment and then gives Vivian a charming smile, "I have to know how to do each part in order to know who will be joining my team and what I'm looking for." He says flying a strong jolting motion toward the other end a bit lower and more level with the goals now.

[Sorry :( The group got deleted in one of my group purges and I didn't even realize it Dx]