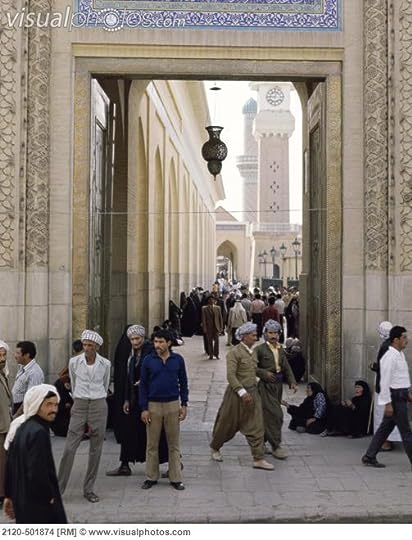 I'm officially opening the discussion for Fuad Al-Takarli's "The Long Way Back". Who is reading this book this year? It won our Iraq novel poll, and seems beautifully translated to me. It's set in the same neighborhood where the author grew up (photo above from his neighborhood, Bab al-shaykh). It tells the intersecting tales of members of a family who span four generations.

I've started the book, but haven't gotten far enough to form much of an opinion. I can say, however, that it has my attention and I want to find out what happens next. I look forward to any one else's comments. Happy reading, and happy summer!

How can I found the book on the net?

I have a copy, so I'll be able to start right away!

Mod
Shaimaa and any one else who wants their own copy, it's available in kindle and paper versions:
http://www.amazon.com/Long-Way-Back-M...

You can read the kindle version on a variety of devices, including a computer.

For Sheila and anyone in the same boat, I totally understand. No worries - we have a lot of group reads happening constantly in the MENA group, and we never delete the threads. So if you come across the book at some future date, you can still post your comments to the same thread.

For Jalilah, Marieke, and anyone else about to start, enjoy!

Melanie, I love the way GoodReads works. When we decide on a book, or even before when we have our polls, I check in my library system to see if there is a copy, or even something by the same author. Then I use a shelf which equates to those in my Library system and a shelf for the thread topic, and so every time we get to any book with the two markers I can order it for delivery to my local library.
This system seems to work great for me, and it also means that when I have a gap in reading for one thread or group I can quickly pick up another read for another group or thread even if it wasn't one which won our polls.

Melanie wrote: " I've started the book, but haven't gotten far enough to form much of an opinion. I can say, however, that it has my attention and I want to find out what happens next. I look forward to any one else's comments. Happy reading, and happy summer! .."

Good to know that it has your attention Melanie and that you want to find out what happens next! I am not at all in the mood to read something where I have to force myself to read on!

Has anyone started? The first few chapters were atmospheric, so even though it's some what slow and descriptive, it seemed interesting. However starting page 64 an entire page and a half describing someone vomiting?
Now I am struggling!

Mod
You can skim if you want...

Jalilah, I think I must have skipped/skimmed over the vomiting.

I'm 1/3 - 1/2 way through and enjoying it for the most part. It took me awhile to get the names sorted out, and I drew a family tree to help me. I like how the point of view alters in different chapters between different people. I wish I knew more about the situation Munira & her mother are coming from.

Mod
Wow, good for you Ardene - I bet your family tree is helpful and beautiful :) Honestly, I'm skimming through it some too. And I find myself drawn to the relationship between Munira and her mother too. I'll write more about that later.

I also drew a family tree. I found the different perspectives interesting too. Honestly, I think what gave this book recognition are the facts that it covers and an important time period in Iraq and it was not allowed to be printed in Iraq rather than the writing. For me, the author is not a master storyteller the way, for example Naguib Mahfouz or Elif Shafak are.

Mod
i'm excited to dive in! I'll be on the lookout for some Proustian vomit and I will plan to sketch myself a cheat sheet for family relationships. :)

Marieke wrote: "i'm excited to dive in! I'll be on the lookout for some Proustian vomit and I will plan to sketch myself a cheat sheet for family relationships. :)"

Please do let us know what you think Marieke!
I might be persuaded to restart if enough of you convince me it's worth it!

Mod
Reading this novel, I was struck by three things. First, this is a story very situated in a certain historical / social / political context, although it does not show up as one might expect. All the characters and action are limited to a single family, and the family is ordinary (lower-middle class by my reckoning). Yet politics flow through the characters and their actions. So I found myself making note of the context: 1962-1963, after a military coup that ended the monarchy. A time when many people in Iraq were desiring a government more representative of popular Arab sentiment. (Also a time before contemporary Arab women writers, so gender attitudes are to my mind outdated, but that's probably accurate to the chosen era.) The characters are not all caught up in governmental change, but their various concerns overlap with politics: health, home economics, employment, sexual relationships, etc.

Second, I noticed how Munira is embarrassed by her mother (a minor point in the novel, but it stands out to me)--the way her mother talks, her gestures, her habit of smoking. I found this part of her character very convincing. Family embarrassment is part of the larger theme (perhaps the main theme of the book) of unity versus independence. (By the way, for a great novel on the theme of family embarrassment, I recommend Anansi Boys by Neil Gaiman.)

Third, and also connected to the theme of unity versus independence, this novel is all about interconnections of individual perspectives. It's structured around a series of first-person narratives, following the consciousness to different characters. But the characters are not prototypes, and they are not absolutely independent agents. The characters are formed by their interactions with one another: "The only thing which is important about people is the history of their relationships" (pg. 196). For Al-Takarli, people are significant because of their connections to one another.

Mod
Sadly I will not able to join this discussion but I am wondering if anyone is reading it in Arabic ? I heard it is very difficult to read since it is written in Iraqi dialect .

Mod
I didn't find a copy here in Arabic. The introduction of the copy that I read said something about how the book was originally written in dialect, but that it was reduced when it was printed, in the interest of a wider audience.

Mod
Hmm , I did not find it in Egypt and I suspect that is the reason is not known here even though it is considered one of the best hundred Arabic novels .

I was wondering about that era The end of the monarchy and Abd al-Karim Qasim (Iraq before Sadam) , it is parallel to Muhammad Najib (Neguib) and Jamal 'Abd al-Nasir in Egypt and similar cases in other arab countries .

I found this blog by Eric Davisto be useful for me

"Qasim's failure to use the overthrow of the Hashimite monarchy to build a truly pluralistic, democratic political system has to be recognized not only as an important turning point in the history of modern Iraq, but as a great opportunity lost."

Mod
Yes, that was a very difficult historical moment...a desire for change, and a sense of disappointment...I can't help but think of recent US history!

Nile daughter, thanks for the link to Eric Davis' blog, I'm finding it interesting to browse.

Mod
Ardene wrote: "Nile daughter, thanks for the link to Eric Davis' blog, I'm finding it interesting to browse."

**I really wish to hear more opinions about this book ....

I finally finished reading this book. I liked it, but I'm also puzzling over it. First, if I hadn't read a little history, I wouldn't have known anything about the politics of the time, and I'm not sure that this knowledge was necessary to understanding the book.

For me, the women seemed the more active characters in this book. Maybe it's just because I identify with them more. Even though there were chapters written from Midhat's, Hussayn's, & K's point of view, I found myself more aware of what was going on in the house among the women.

I found Munira's situation agonizing,and that is what stands out for me.

Mod
I'm glad you liked it, Ardene! I think I was focusing on politics a bit because I wasn't very interested in the plot.