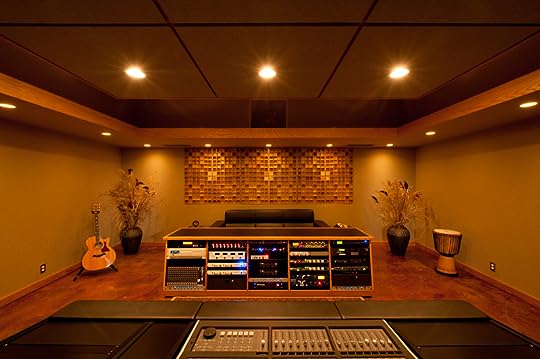 Mod
Ashley dragged Iku along with her as she came inside.

Mod
Iku had a Bland expression on her face as she removed the Cigarette from her mouth and looked around, tilting her hand backwards to look at Ashley. "So, why bring a drinking buddy to a studio?"

Mod
"Just had to get you away from the drinks"she shrugged as she looked at the instruments around her.

Mod
"but that's the point of being a Drinking Buddy." Iku pointed out before shrugging out of Ashley's Grip, looking to see what things were actually in the Building.

Mod
"Yeah but you should try other things too."she says as she gestured towards the instruments,"try one of these."

Mod
"What good would plucking some strings do, I'm a God of war?" Iku's questioned as she looked over the display of weapons.

Mod
Iku's sighed in Disbelief as she reached down and picked up a Violin, picking up the Bow afterwards and looking at a Sheet of Music which stood at the Side of the Room on a Stand. Iku walking over and reading the sheet before closing her eyes and taking a step back, preparing to play the piece but first looking to see if Ashley was paying attention.

Mod
Iku Sighed before beginning to draw the bow across the strings, her face calm as she played the song. As she played she had used her abilities to have other instruments join in as well, creating an entire music piece being played from one look at only one instruments music sheet.
https://m.youtube.com/watch?v=6-wEAeN...

Everyone always associated War with battle but that wasn't true, there was also the diplomatic side to war including Negotiations and espionage. Because of this Iku was well versed in playing already along with several other talents, though they didn't actually entertain her as much as Either drinking or fighting.

Mod
Ashley smiled listening attentively."this is so beautiful."She said as she listened in awe to her perform.

Mod
Iku continued to play until the end before finishing, giving a bow to Iku before placing the Violin back where she had found it. "Happy now?" Iku asked as she pulled another Cigarette from her pocket and lit itself, looking back over to Ashley.

Mod
"everyone overlooks the Beauty of War, and only see's the Violence." Iku said with a Sigh, Iku also preferred the Violence of War so she had no right to complain about the views of others.

Mod
"Ok alright."Ashley picked up another instrument they Happened to be a guitar and started playing it.

Mod
Iku sat Down on a Nearby seat, turning and facing Ashley before Listening to Ashley Play.

Mod
She started playing the sings she knew,feeling herself get lost in the music,she kept playing expressing her thoughts in music.

Mod
After the finished she smiled at Iku."so how was it?"She asked running her over the smooth surface if the guitar.

Mod
"you seem to Enjoy Music, it.........sync's with your thoughts." Iku replied as she left the Cigarette in her Mouth, her Face still one of Boredom as she hadn't had a Challenging Fight since that Dios Kid became her Disciple.

Mod
"Yeah I connect well with music."She replied as she smiled putting the guitar back."so Iku tell me a little more about yourself."

Mod
"i'm a Good with Eternal Health and use it to commit numerous Sins, what else is there to tell?" Iku asked as she pulled out the flask and took another Swig, with Such a long and Healthy life she's picked up many bad habits.

Mod
"Yeah we'll ever tried to be good?"She asked looking at her.

Mod
"The concept of good and Evil is misguided, those who win simply claim they were Righteous but everyone who disagree's with them is dubbed as Evil regardless of View. But no, I'm an alcoholic and that isn't changing soon." Iku replied as she returned the flask to it's hiding place and removing the Cigarette from her mouth as she extinguished it.

Mod
"I know you won't change your habits."She sighed."I was just curious."She said Looking at her."I can't be bad,is one thing I know for sure."

Mod
"Doubtful, if someone hates you even a little you've done something bad in their mind." Iku pointed out as she pulled out and lit another Cigarette.

Mod
"Good point there."She said thoughtfully."I'm sure many people do hate me and I'm sure they must be out to kill me,"

Mod
"If they Try, give me a call. I can't have my new drinking Buddy die on me." Iku said as she gave a small smirk in Ashley's direction, Iku would likely send one of her followers since Iku didn't have any abilities of Teleportation but she'd still hate if her buddy died.

Mod
"Sure I'll keep that in mind."she smiled up at her."I like you though,you're a nice person."

Mod
"I'm a goddess, not a Demoness." Iku reminded Ashley, though that there was a misconception. Just as their were evil gods there were many honest Devils, though these number were often minuscule and ignored.

Mod
"I know,do you need me to present a sacrifice to you though or something?"She asked curiously looking at her.

Mod
"Are you a Virgin?" Iku asked both Rhetorically and Sarcastically, Iku only has her top Disciples perform tribute/sacrifice to her but only in Dire Situations which occurred rarely.

Mod
"Yes I am a virgin,"She replied looking at her."Why do you ask?"

Mod
Iku Face Palmed as she sighed, she wasn't expecting an answer as it was a Joke. "All the Scriptures refer to 'Virgin Sacrifices,' I was making a joke."

Mod
"Oh."Ashley laughed."Sorry I think my sense of humour is busted."

Mod
"or perhaps my lack of expression just isn't suited for telling jokes?" Iku suggested with a shrug and a half willed smile, pulling the cigarette from her mouth shortly after and holding it between her two fingers.

Mod
"Perhaps it could be."She said looking at her."how many cigars have you consumed today and how many drinks?"

Mod
"There is a difference between Cigar and Cigarette, look it up but 5 packs of Cigarettes and........." Iku paused as she began to count on her fingers.

"12 bottles of wine, 46 glasses of wine, a pint of Whiskey, almost a Litter of Spirits and a total of 173 shot glasses."

Mod
Ashley looked at her with a disapproving look."I'm not surprised.."She said."how are you still sober?"

Mod
Iku paused for a moment and thought before replying, her answer precise and simple. "Practice and besides, who said I was sober?"

Mod
"You certainly look sober."She replied,looking at her."Because I've seen plenty of drunk people and I know how they talk and act."

Mod
"Then probably practice." Iku answered with a sigh, placing her Cigarette in her mouth again.

Mod
"nope, Virgin Goddess here too. most People end up injured before they can even try getting into bed with me." Iku Confessed before looking up to Ashley, the only People looking up to Iku were people who had Something to fight for.

Mod
"Haha that's nice."She smiled."because in a world like this,something like that would be great."She looked at her."oh so do you have anyone who looks up to you?"

Mod
"only those who Desire something." Iku replied as she placed the Cigarette back into her mouth, sighing as she thought back to her Three Disciples.

Mod
"Is it really?" Iku asked curiously as she sat there and looked at Ashley