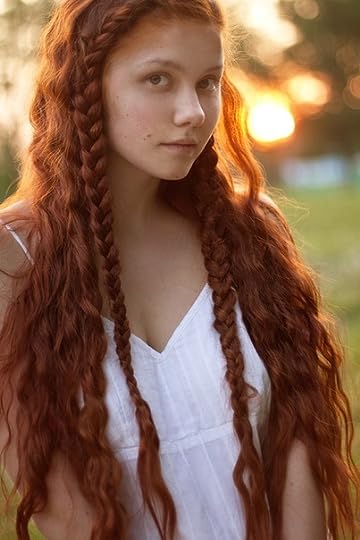 personality:
Avis is very happy, but hasn't always been. She is a bit grumpy sometimes but is good ad hiding it.. She is very kind an is nice to everyone.
She likes to learn things(not erudite style but more like how to bake a bread).
She really adores her friends and animals and is against animal cruelty.
She is very good at brabbling and is a bit lazy sometimes. She is shy, but very strong and very mature.


family:
Father Charlo Meadow. Charlo died when Avis was young and thats why she hasn't been happy for her whole live. Her father was very honest (which is required in Candor) but Avis did not always aprove this. Still her father was her hero. He was very funny, and caring and loved her very much.
Mother Jocey Meadow: Very Caring, but strickt. Wanted to make the children as independent as possible and did not always was the nicest. Still her daughters loved her very much.
Sister Nova Meadow: A very crazy girl. Always busy doing things. She became dauntless.
little brother Jonah Meadow: He's still a little toddler, but already very honest. A true Candor.
Steph father Chris Meadow: A kind man, but a bit harsh. He hated that Avis went to Amity.

History
Avis was born on a warm summer day. Her sister was four. Nova has always been her rolemodel, but wasn't a very good candor. Her sister was angry a lot, but Avis didn't mind much cause she always saw the good in things.
When her Father died she was very sad and she became shyer( he died of an hartattack)(when Avis was 8). When her sister went to Dauntless, Avis crawled out of her shell and became very happy and peacefull. Then her mom sensed that her other daughter would leave her to. '
A half year later her mom had a new friend. Then they married. Avis really liked the man, but he wasn't a bit like her father and she was happy she could leave in a year.
Then her mom became pregnant and she was really really happy. She could just meet her little brother before she'd go to Amity.
The little boy chanced her mothers and Avis' live. Now she would never have to feel guilty about her mother. She had Jonah and Chris.
She has a best friend: Bree Huff :)

weaknesses:
- she can’t swim
- growing up without her father
- freaks out when she hears the word asshole

skills:
- she is strong
- sewing
- cooking

Weapon of Choice:You should not fight but talk, but if she really has to a crossbow

Faction they want to go to: Amity
Aptitude test result Amity and Candor
Faction they choose at choosing ceremony:to be filled in later
divergent: yes

Ok first off: bolding and section headers must be the same as in the template, check an approved character for an example
The fears, weaknesses like and dislikes must all be in list form
Three of each are necessary no more no less and they must be in list form, extra fears are expected but just leave those in another section like other or leave them out and mention then in rp

Tell me when you're dobe

Strange, I thought I did that.
Will do it right away!

Maby this is a stupid question but how do I bold and italicize it?

In the format there are things like
<.b.>history:
And
<.i>age:

you still need an image

Should I just fill in this link? And her eyecolor is not right. should I photoshop that or is this allright?

The image doesn't work on my computer, do you see it?