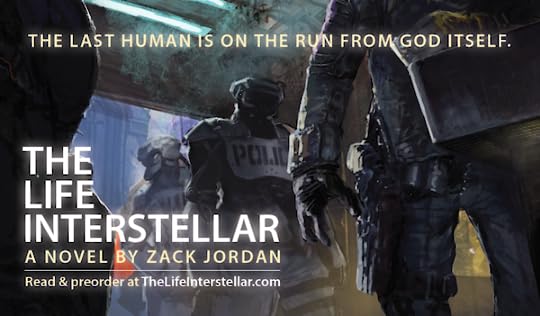 From the universe of The Life Interstellar, a swashbuckling space opera about the last human in a crowded galaxy on the run from God Itself.

Well howdy, all you poor doomed Humans you! Warden "The G" Gritt here. I bet you're getting good and tired of life in Vang Supermax by now, right? Nothing to do but twiddle those weird thumb things, terrify my non-Human inmates just by being here, and hope that someone sends you a Human Care Package. Yeah, rough life. Good thing I'm a swell guy, because I've got a whole bunch of entertainment lined up for you. Buncha lucky stiffs, that's what you are.

Hello Humans! It's your friend RA4000 Robot Assistant. Both the Warden and I are very sorry to hear about the rest of your species, although it's possible I am better at expressing that particular sentiment. I know most of you have had your network implants deactivated for your stay in Vang, but Warden Gritt has allowed me to share some reading material with you while you wait for the end.

Edit I mean the end of your stay of course. Call me an optimist, but I can't imagine this is forever. Well, except for the other Humans. The dead ones. It's forever for them.

Edit I apologize; I think my tact module is malfunctioning.

Edit Well this is embarrassing. I don't seem to have much available, fiction-wise. Perhaps the Warden is correct in stating that a Human Care Package would be the way to go there.

No matter! I will find something, I promise. Hang in there, Humans!

I knew I'd find something!

YOUR SOUL IS IN DANGER!

What would you say if I told you I could send you halfway across the galaxy in mere moments, but I would have to destroy your SOUL in the process? Does that sound like a reasonable bargain? I should say not!

Imagine with me, friend! You are sitting on the observation deck of some great ship, peering out at the universe. It is laid out around you, glorious and sparkling and eternal. Your ship approaches a ring of lights, the only indication of what lies in wait for you. They would tell you that you are nearing a triumph of technology but in fact it is a maw, a tool of DARKNESS! For as soon as your ship passes through, it is destroyed as utterly as anything can be. It quite literally no longer exists! All that exists now is your BLUEPRINT, technical plans to construct another ship, another you somewhere else! It is these plans which are sent winging through the crushing darkness of subspace, not you!

For you are gone. Make no mistake, friend: GONE! It is not the same you. How could it be? That you is gone, the ship you rode is gone, its hundreds or even thousands of passengers, all gone. DESTROYED! What has been constructed in another place does no more than resemble its model.

Friend, I write you this missive in the hope that it reaches you in time. If you have not used the Transfer system, do not do so! For it means your end as surely as a bolt to the brainstem.

Your concerned friend,
Yvv Ivim Ytt
Have you found this useful? Please consider forwarding to a friend!

This looks like a great deal. Perhaps something to forward to your friends who are not currently incarcerated?
---

WELCOME TO WAREHOUSE
When you need space, think subspace!

You are the proud new renter of a plot in subspace! You can store anything you want there, from information to up to 64 cubic meters of matter! And once it's stored, our security is unbeatable. It has been nearly sixteen thousand years since our last security lapse–and counting!

So what can I expect?

Storing your treasures in Warehouse is as easy as 0, 1, 2!

0. Bring the object(s) to one of our more than 270 million locations.
1. Use your unique Key to open any door.
2. Place the object(s) inside the door and close it! Your property is now being stored outside the universe!

Warehouse Keys are the most secure technology in the known galaxy*. Every mind (intelligence tier 1.8 and up) has a unique pattern, one that can be detected no matter how much that mind has learned or evolved. Even if the mind has been transferred to a new host or core, this pattern is still easily visible to our sensors. A Key is simply the combination of a specific mind with a specific mindset. That means that you can have multiple accounts if you so wish, each connected to a different mindset. Need to access a different account? Just close the door, change your mindset, and open it again!

Another bonus to having a Warehouse account is that you can access your treasures from any of our locations. Simply store it in one and access it from another. Don't bother shipping it; just Warehouse it!

I didn't used to believe in horoscopes. I still don't, actually. Still, perhaps you'll find something to comfort you in this difficult time.
---

Special guest column by Elynnyn of Sbaan, author of the hit bestseller I'm Awake, How About You?

Hello readers! Let's see what the multiverse has in store for you today.

THE THREE SERVANTS - That social event has you nearly in mitosis! Yes, several certain someones are going to be there. But who cares? They are just as sensitive to pheromones and/or wavelengths as you are! Don't be shy! Everyone puts a pressure suit on the same way: one appendage at a time.

THE CAPTAIN - Keep in mind that old Archon proverb today: "It's always tax day somewhere." You've been considering a purchase for a long time, but an upcoming event will make you regret it. Instead, consider treating yourself to something small and biologically unnecessary and Warehouse the rest for a radiation storm.

THE ELECTRON CLOUD - Make sure you don't Transfer to conclusions; it's never a good idea, and today less than ever. Instead, choose a destination and accelerate! You can always make a course correction if you have to. Just keep in mind that life works just like relativistic travel: the faster you go, the more friction you will experience from the universe itself.

THE CLAWED BEAST - Nature abhors a vacuum, and nowhere is that more true than in your own emotional life. You can keep everyone out for awhile, but someday you'll implode like Alymma VI. Don't automatically reject a stranger's suggestion today; just because an idea originated in another Intelligence doesn't mean it's a bad one.

THE OBELISK - There's one phrase you should keep in mind today: "like carbon and silicon." It's time you stopped comparing yourself to that boss, partner(s), crewmate, etc. because you are just that different. Instead, think of how you can complement each other! You can worry about the details later.

THE GRAVITY WELL - You are aptly named today, because someone is attracted to you! But don't just jump into the first mating pod that comes along. Remember that long-term, once-in-a-lifetime is rarely that, particularly with your anticipated lifetime. You may feel overwhelmed today when Sago aspects the Nullstar (from certain points of view).

That'll do, robot. That'll do.

Sorry, Humans. I shall return with more tomorrow if you are still alive.

You've got mail, humans. But don't get any ideas.

AUGS
- Personality corrections, wipes, and reprints (for you or a friend!)
- Pheromone modules (choose from over 190 species! guaranteed rejection-free)
- Self-defense of all kinds!
- Intelligence++ (up to Tier 2.7!)
Order now!