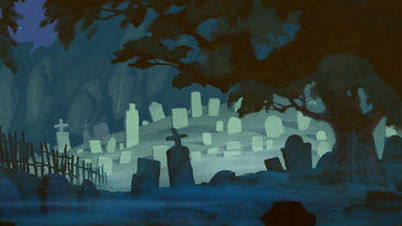 During her time allowed outside of the merchant's shop(seeing as how the merchant thought it best to let his "merchandise" have a bit of freedom while they could) a young girl who was at least 16 years old was visiting the graveyard.When she was more comfortable with the fact that she was alone she began to dance around the tombstones,her pale skin making her seem like a ghost,her hair white as snow enhanced that effect of her looking like a ghost.The girl's name was Rose Akane Suzushiro but she prefered to be called Shiro.Shiro often visited the graveyard because her parents were buried here and when she reached her parents graves she stopped dancing then she knelt down and she said softly"Momma,Papa I..I know you can hear me and I know you're watching over me.."She took a deep breath then added"I know it's also been at least a year since you died papa and at least four years since you died momma but..I'm still here and I know it's foolish but I promise you I will follow my dreams and I will get out of here but..I also want to mke the two of you proud,I know I'm alone but.."she started to cry but she quickly would wipe away her tears as she spoke"I'll make lots of friends,I'll do my best and I'll make my way to the top..I know that I'm a human but I have to follow my dreams don't I?"she then smiled a small smile"I'll make sure to visit you both even after then but when I see the oppurtunity to pursue my dreams I'm taking it,the merchant papa sold me to said he'll see if he can find me a nice master but..I shouldn't hold my breath..yes he's mean but sometimes he's nice....I just hope I can get out of here soon.."she then gently placed a small plush toy that she had made herself on her parents' tombstone then said"I love you both" to them then she proceeded to get up slowly.

Apollo stared blankly down at the desecrated tombstones in distaste. Well at least that's what he displayed outwardly. Deep inside he felt his pulse raise at the sight of the graves.. humans. So many of them, who'd made it a habit to bury their dead. Personally Apollo felt that he wanted to be cremated, and wanted someone to dump his ashes into a lake, somewhere peaceful, calm. The last thing he would want would be to rot away in some fancy little box. It just didn't seem classy. He didn't hear the girl who was only a few meters from him, and didn't even see her, too busy paying respects to those who'd been killed in vain, slavery, violence, hate crimes. Humans were tortured for being human. It was disgusting.

Rose got up and brushed herself off then started to walk away but she ended up losing her footing and falling,accidentally bumping into someone and she mumbled"Shit,the shopkeeper is going to kill me if I come back late" she then scrambled to her feet and said to the person she had knocked over"I..I'm sorry,are you alright?"

Apollo grunted, glaring up at Rose, "Who the fuck are you?!" he demanded, eyebrows curling into a furrowed position as his hands clenched into fists behind him, propping him up.

"I...I'm sorry!"she squeaked out but when he demanded to know who she was she said shakily"M..My name is Rose Akane Suzushiro..."she shakily offered him her hand to help him up.

Apollo's tail spirled in a flustered motion and his ear twitched as he backed up, stumbling to his feet, promptly denying her help, "Okay?" he rolled his eyes, "Did you really need to tell me your full god damn name? Like, am I supposed to just call you by that for the rest of the time that I know you, which i'm hoping isn't very long at all?" he growled.

She stepped back"I..I.."she whimpered"I'm sorry I didn't...I mean..the shopkeeper said to tell whomever asked my full name but..if..if you want you can call me Shiro"she stumbled and fell again landing on her back,she had stumbled over a broken tombstone.She hadn't meant to upset the man.She quickly scrambled to her feet but avoided making eye contact with the man.

Mod
A young boy with bright blue longish hair that was pulled up on the left side and matching blue eyes walks threw the graveyard. He wore a white shirt, white loose jacket, white shoes and white skinny jeans. He was a full blooded demon, but smelt and looked like an angel. He usually didn't come here though, he just thought he would for a change. It wasn't as pretty as the higher up's graveyard, but it was still pretty. It was night time so the only thing lighting up the graveyard were a few lamp posts so he had to watch his step to make sure he didn't trip.

Rose got up and brushed herself off and slowly started to back away from the man she had been talking to,she was just a lowly human so the fact that the man hadn't killed her surprised her.Her hair was white and her eyes were galaxy colored and as she walked she muttered"Who else am I going to run into tonight?"

((Kept it so cry could join in again if she wants))

Mod
Felix hums, glancing around, blinking lightly when he trips over a gravestone and falls face first into the ground. He grunts,"Owy.." He sits up, sighing and dusts himself off. Yeah, he was pretty clumsy. He glances up when he hears footsteps not that far off.

Rose started to run,she didn't know if anyone was around but she heard someone say "ow" so she froze,her heart pounding,she was already scared due to the first person she ran into so she cautiously approached where the "ow"came from and spotted a blue haired boy,thinking he was human she approached him the offered him her hand to help him up"you okay?"

Mod
Felix blinks up at her, giggling cutely,"Sorry, I didn't know anyone else was here." He stands up and dusts himself off,"Yes, im fine. Its dark out here is all." He eyes her, being able to hear her heart beat,"My apologize, did I scare you?"

Mod
Felix blinks, smiling cutely,"My name is Felix.. I.. Dont really have a nickname, so I guess just call me Felix.. Since.. Its my name." He giggles,"What are you doing out here by yourself? Its dangerous, mostly this time of night."

"I..I was visiting my parents' grave"she said quietly"and well..it's nice to meet you Felix"she couldn't help it,she felt a tad calmer due to how nice he was being"what brings you here?"

Mod
Felix blinks, smiling cutely,"I finished dinner and I couldn't sleep so I thought a walk would do me good.." His smile turns sad,"Im.. Sorry that your parents are dead.."

Mod
Felix blinks, smiling cutely."Even so, I feel bad for you."

Mod
Felix smiles cutely before looking around,"Its so dark here, did you run into anyone else?"

Mod
Felix smiles,"Well, not everyone is. Though, they all have there reasons for being the way they are. There's always only one person who can tame mean people. At least, thats what I believe."

Rose smiled"So umm..do you want me to walk you home?"she offered,she didn't want to go back to the shop yet

Mod
Felix blinks, lightly laughing,"Thats nice of you, but being im the man, shouldn't it be the other way around?"

"Maybe but it's got to be nice to have a change doesn't it?"she asked with a smile

Mod
Felix tilts his head,"Well.. I live on the upper plate, it might take awhile to get there."

"Okay well at least it's a beautiful night wouldn't you say?"she asked him,she didn't mind walking him where he lived but she knew she had to come back to the lower plate after

Mod
Felix blinks, gazing around,"You cant see the sky here im afraid. Its much prettier on the upper plate, the sky's so big. I like sitting on my roof with all the lights off at night and staring at the stars."

"True..I just thought it would give us something to talk about"she said quietly,she had never seen the night sky,let alone any stars,she had heard how pretty they were but she never got to see it

Mod
Felix blinks, cutely giggling,"Theirs tons of things to talk about other then that."

"true,so what do you like to do Felix-chan?"she asked,she felt like he wouldn't scold her or anything for being so informal

Mod
Felix blinks,"Felix-Chan?" He giggles,"Wouldn't it be Kun? I am a dude after all, chan means Ms. ..." He shrugs lightly, glancing around,"I was hoping to actually meet someone here."

Rose blinked"S..sorry"she then stepped back thinking maybe she had kept him long enough then she said"Shall I leave you be then?"

Mod
Felix blinks, smiling cutely,"No, its fine. I guess he's just running a little late, so if you left, we'd both just be lonely."

"Oh..okay"Rose smiled a bit"I just don't want to be a bother to anyone"she said softly

Rose looked around and she then looked back at Felix"would you like me to hang around untilyour friend shows up?"