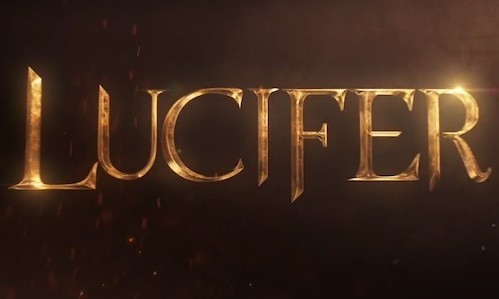 Lucifer is an American fantasy police procedural comedy-drama television series developed by Tom Kapinos that premiered on Fox on January 25, 2016.[1][2] It features a character adapted from the character created by Neil Gaiman, Sam Kieth, and Mike Dringenberg as a supporting character in the comic book series The Sandman, which later became the protagonist of the spin-off comic book series Lucifer written by Mike Carey, both published by DC Comics' Vertigo imprint.

Liked the comic, iffy on this, but did hear a good interview with the show runner, so I'll probable give it a look.

IM a big fan of Lucifer totally. they did a good representation of the comic and its roots that began inthe Sandman. Once again, its fun and there are a lot of sexual references of course, I mean He is Lucifer right?
This is actually, alone with the Flash, one of his favorite shows. Those not really in the know about the character himself from DC, might be taken aback by the content of this show. as such the Million Moms of American have been sending constant letters to NBC to remove this show from the line up stating it incites the youth of America to embrace sin and the devil and his work. lol. Now that's funny.

Jeff wrote: "IM a big fan of Lucifer totally. they did a good representation of the comic and its roots that began inthe Sandman. Once again, its fun and there are a lot of sexual references of course, I mean H..."

NBC should thank the million moms for the huge amount of publicity they provided for the show. Probably bumped the viewing figures.

yeah, a lot of curious people that hadn't seen it yet

Just watched the pilot this past weekend. It's definitely not the comic, but has enough of its dna to be satisfying. The formula/setup seems to suit the take on the character they chose and the lead is quite good. Looking forward to watching more.

Mod
I finally watched it last week. Found it funny and like the characters. Hate the season was so short, but I'm curious where it will go from here. Don't know the comic history for this one.

The comic itself is based off of one of Neil Gaiman's The Sandman story arcs, where Lucifer himself, due to a previous visit by the sandman to hell, has rethought his eternal position in Hell and has grown bored and tired of it. In that story arc of Sandman, Lucifer requests Morpheus (the sandman) to re-visit hell. This is so that Lucifer can give him the keys to Hell, stating that he was tired of it and wants to leave to go to the mortal world.

Morpheus arrives and finds that all of Hell is totally vacant. he has went everyone, his demons and the damned away, to where ever they ended up he didn't care. As a last act to which its a selfish one of course, and since he has a love hate relationship with Morpheus because he trusts him, asks Morpheus to cut off his wings so he can not only pass for mortal but also as a final act of revolution to his father.

The story arc goes for four issues and is one of the more entertaining story arcs, as Morpheus, with no interest in keeping or having the keys to Hell needs to find a suitable party to take over the realm.

With many different characters form other worlds that have been in past stories arrive in the Dreaming, all wanting to take the keys for themselves, Morpheus has to make the final decision on who will get possession of Hell, all the while realizing that Lucifer has duped him into an almost impossible predicament.

At the end, we find Lucifer sitting on a beach in a lounge chair soaking up the sun and realizing how beautiful the world is and how he plans on getting the most out of his new life.

Sorry for that long explanation, but its integral to understand why and how he's gotten to the point inthe show. It also calls for anyone that hasn't read The Sandman, one of Neil Gaiman's best written works of fiction as far as I'm concerned, to really read one of the most entertaining comic or graphic series published.

Erin, I think I might has sent you the Sandman files already. :)

I feel bad that I'd completely forgotten about this series.
Need to track it down.

Mildly annoyed how much seems to have been changed from the comic, but the premise is interesting that I'm willing to give it a look.
Have to see if I can add season one to my netflix queue.

Mod
Jeff wrote: "The comic itself is based off of one of Neil Gaiman's The Sandman story arcs, where Lucifer himself, due to a previous visit by the sandman to hell, has rethought his eternal position in Hell and h..."

Thanks for explaining it - didn't realize it tied into this story.

Mod
Travis wrote: "I feel bad that I'd completely forgotten about this series.
Need to track it down.

Mildly annoyed how much seems to have been changed from the comic, but the premise is interesting that I'm willin..."

I don't think it's on Netflix yet, but I may be wrong.

Hope you enjoy it.

Erin ☕ *Proud Book Hoarder* wrote: "Jeff wrote: "The comic itself is based off of one of Neil Gaiman's The Sandman story arcs, where Lucifer himself, due to a previous visit by the sandman to hell, has rethought his eternal position ..."

Sandman is a great comic, but from what I've heard/seen about this show, it doesn't sound like you need to read it to get the TV show.

Sometimes, with translations from one media to the other, it can actually hurt the experience knowing the source material.
Know that from painful experience...

On the other hand, it's a really good comic.
Reminds me that I still need to track down the last two trades of the Lucifer comic series.

i have those all digitally. Yeah I can agree with the transition between comics and tv or movie. However, the direct tie in that I explained will help those and even enhance some of the story line and hopefully make you want to read it.

Lucifer is on Hulu now

Jeff wrote: "i have those all digitally. Yeah I can agree with the transition between comics and tv or movie. However, the direct tie in that I explained will help those and even enhance some of the story line ..."

Yeah, I realized that everybody experiences this stuff differently, so back pedaled a tiny bit, so I didn't sound like it's a carved in stone rule.

Gonna wait for netflix.
Figure that will give me a chance to catch up on Daredevil and finally finish Smallville.

Mod
For all who got into this one, it returns tonight.

I actually got my parents into it, which kind of surprises me. They loved it though.

Yeah and I was telling you for a long time that you would like it and you totally doubted me. hehehe:)

Mod
Jeff wrote: "Yeah and I was telling you for a long time that you would like it and you totally doubted me. hehehe:)"

I was definitely wrong to doubt you with that.

The return of the season has been fun too. The first episode of the second season was one of the funniest of the entire series.

your right the first two eps have been awesome

Mod
The return was excellent with it's three episodes but I'm annoyed they're now going on a four month break, just like Gotham. Ugh, Fox!

Mod
Lucifer has officially been renewed and upped to more episodes next season. The rest of this season will air when it comes back in May.

Mod
As a funny side note, got my friend to try it and now she's addicted. She watched the full two seasons in two days and then texted me upset there wasn't more. It's one of those shows that kind of flies by.

Mod
This has remained one of my top favorite TV show comedies. I was saddened to hear next season will be the last though - nothing else on TV like it.

Mod
I'm incredibly bummed Lucifer has been cancelled. It's the funniest current show out there that I've found in the past few years. The actors have promoted protests through Twitter under the #SaveLucifer tag that has gathered some publicity. Fox is easy to cut out programming but the numbers weren't bad for this one, so I'm crossing fingers another station actually would pick it up.

Mod
Netflix bought this but they shortened the series. Unfortunately they don't keep series around long for the most part either but I'm hopeful. Now when the new season will actually come out and will they retain the same writers?

Mod
Despite leading the streaming charts for four weeks after it's release of season four on Netflix, Netflix has announced the fifth season will be it's last.

Their binge to buy the show paid off it seems, but sorry to see it go.

The new season was well-done - humor left it compared to earlier series, and it was shortened to 10 episodes, but I still enjoyed the storyline and son and I binge watched it over a weekend.