This is the basic layout of a character sheet and ALL sections must be filled out in order for the character to be approved. This is only the minimum information, however, and additional information may be added.

First Name: Mara
Last Name: Wildheart
Age: She has been alive for 10 years, but as pixies of her kind have a shorter lifespan than humans, that is comparable to about 20 years.
Gender: Female

Personality: Mara is a silent sort of person, probably because her soft voice is so quiet that people usually don't hear her when she tries to speak. But she has a stout heart, iron will, and unwavering determination. She does a lot of reckless things, but never stupid, and never for her own gain but for the care of another person. She has an extreme sense of faith, hope, and trust, and lets those virtues guide her more than anything else. She follows her heart, though it is not always in tune with her reasoning.

Hair: A small blaze of auburn
Eyes: Delicate and peering grey
Weight: As light as a small twig
Height: A bit taller than a tea cup
Distinguished Markings (If any): Wings on her back, simple and translucent.

Back-story: She doesn't know of any other pixies in this area, as her home is very, very far from these lands. Sometimes she feels that bittersweet yearning for her homeland and the company of those of her own species, but this is now her home.
Her last name seems rather cheesy, but it was given to her by her family, long ago when she left home. They said that she had a wild heart, because she wanted to leave a land where everything was her size to be among humans, where she could never really fit in, would probably never be accepted, and where even the simplest of things would be ginormously looming before her, far to large for her to handle. But the doors to their loving home are always open to her, should she ever wish to return.

Weaknesses: Her small size
Her radical and somewhat rash nature
She does have a yarn of clumsiness woven into her nature.

Strengths:
Her radical and somewhat rash nature, along with her small size :)
Her huge heart, ability to trust, and her unwavering hope

Family: Vaguely mentioned in her back-story 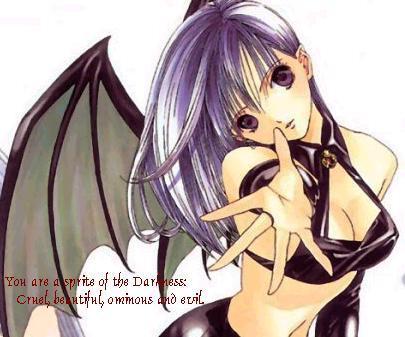 Personality: Furya is a free-spirited being. She enjoys nothing more than just having fun and messing with other people. She's a very social being who enjoys being around others and will do anything she can to keep people involved in her life. She takes joy in making people happy, but also loves to play pranks on them and lead them astray.
Furya is very jumpy and excitable, as well as easy to upset. Her emotions can run wild throughout the whole range and are usually around one of the extremes. Despite this, she is happy most of the time and avoids situations that cause her not to be.
Furya is quick and eager to make friends with everyone she comes across and will do anything she can to hold onto her friends. She worries and hates to lose any of her friends at all and becomes really upset when one of her friends don't want to be with her anymore.
While Furya is fun-loving, she can also handle herself in an engagement and use the nature around her to ensnare her foes and keep them away from her.

Backstory: Furya was born of nature as most Sprites are and has grown up in the forests of the world. Her history is quite quaint and she has never been through extremities in her life other than the emotional swings she experiences when any of her friends leaves or dies. She loves the forests and all of nature and lives to experience the world to its fullest.

Strengths: Furya is great at being social. She can interact with almost anyone and make other happy. Because she's extremely energetic, she is almost always jumpy and can remain active for long periods of time. Her attunement with nature also allows her to heal herself and avoid being harmed by others.
Weakness: Because she tends to make friends with everyone, Furya is susceptible to deceit and betrayal. Her strong emotion swings and ties to her friends also cause her to become distraught if she is betrayed by others.

Powers: Can control Nature fully. Can control the Elements of Ice and Water.
Special Abilities: None.